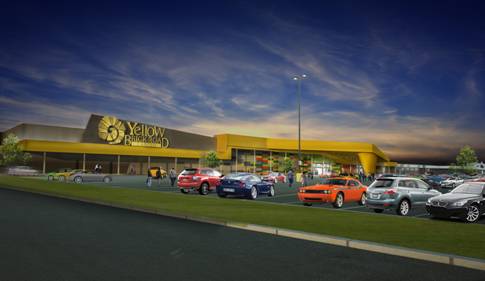 This spring the Oneida Indian Nation will open The Yellow Brick Road Casino in Chittenango, New York, the town where L. Frank Baum was born in 1856.

However, that does not pass muster with John Woodrow Cox of the Washington Post for two reasons. The first is Baum’s dark history of advocating Indian genocide:

“The Whites, by law of conquest, by justice of civilization, are masters of the American continent, and the best safety of the frontier settlements will be secured by the total annihilation of the few remaining Indians,” [Baum] wrote in late 1890 for the Aberdeen Saturday Pioneer in South Dakota. “Why not annihilation? Their glory has fled, their spirit broken, their manhood effaced; it’s better that they should die than live the miserable wretches that they are.”

Two weeks later, Baum, the newspaper’s publisher, reiterated his point in an editorial written after the slaughter of as many as 300 Sioux at Wounded Knee. He demanded that the U.S. government “wipe these untamed and untamable creatures from the face of the earth.”

The second reason is that the tribe has actively campaigned to change the mascot of the Washington Redskins football team, though it is the hobgoblin of inconsistency that rankles the Post, not the tribe’s attempt to tamper with a local institution.

The Post raised objections even though the Oneidas’ leader has accepted apologies offered by Baum’s descendants:

….[The] editorials so deeply stained his legacy that — 87 years after he died — two of his descendants traveled to a South Dakota reservation in 2006 to ask for forgiveness. Gita Morena and Mac Hudson apologized to Sioux families whose ancestors were killed in the massacre.

“We stand before you and before the citizens of both our great nations to suggest,” their statement read, “that ‘The Wizard of Oz,’ a great American fairy tale, and the Massacre at Wounded Knee, a great American tragedy, be forever joined in the hearts, minds and memories of all our people.”

“I think that’s a wonderful message — that we’re able to overcome by repentance and by forgiveness,” Halbritter said. “It’s looking forward rather than backward.”

But the Post quoted other Native Americans who criticize the chosen name, showing the apologies haven’t satisfied everyone.

As you can imagine, a lot of businesses in Chittenango capitalize on the Oz theme. After all, what else has the general public ever heard of in that part of the country?

Since the Oneida are fine with the idea and believe it will help them make a few more bucks, it’s surprising the Post doesn’t just chalk it up to the karmic balance and move on.