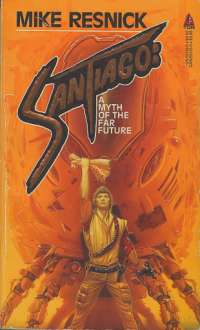 With one quick click online, we can send a book to our mom’s iPad without a hitch. But what to send? Obviously, as a science fiction fan, I like to try to get other people as excited about science fiction as I am.

It’s not an easy task. A lot of people are simply averse to the science fiction genre, whether it’s because of the association with nerd-dom or an aversion to space and lasers.

As a fellow fan I am perfectly satisfied with Knapp’s mix of classic authors – Heinlein, Bester – and contemporary legends – Scalzi, Sawyer, Resnick. Unfortunately, his premise breaks down immediately in the face of reality. The thing about people who are adamant in their dislike of sci-fi is that as soon as they detect a sniff of it they indignantly spout something that translates to, “I say it’s spinach and I say to hell with it.” To suppose that quality sci-fi, however carefully chosen, will fly under their radar is absurd. Especially a bright orange paperback with a BEM on the cover. (What were you thinking, Alex?)

If you’re a fan who’s desperate for a gift idea, why get sidetracked into unwelcome evangelism? Profit from your knowledge of the best sf novels by making them your guide to non-genre works people will love to receive. Here’s what I mean.

Impressed with Heinlein’s Starship Troopers? Then don’t lose a minute gift-wrapping a copy of Eugene V. Sledge’s autobiographical account  of his WWII service, With the Old Breed: At Peleliu and Okinawa. Truly, when I read it this summer I was utterly impressed by its narrative flow and dynamic style, beyond anything I’ve ever found in a historian (even David McCullough). I also suspected I’d discovered the literary roots of Heinlein’s most famous combat novel – until I saw that Sledge’s was first published in 1981. If there’s an influence at work, it must be Heinlein influencing Sledge. And there’s no question the old master would have been proud to acknowledge Sledge as a student, if such is the case, given the brilliant result.

The Guns of the South came out just a couple of years after I’d read Shelby Foote’s account of the Civil War. Reading Harry Turtledove’s novel I remembered Foote’s coverage of The Wilderness well enough to be impressed by Harry’s detailed historicity of his fictionalized battle. He faithfully replayed the battle until the point where his Confederates turn the tide using AK-47s. For armchair strategists Foote’s The Civil War: A Narrative is just what the doctor ordered. (A Ph.D, that is.)

So that’s the plan – backtrack from your favorite sf novels to the great books that equipped you to enjoy them and the people on your gift list will think you’re a genius.

12 thoughts on “What to Give People Who Hate Sci-Fi”