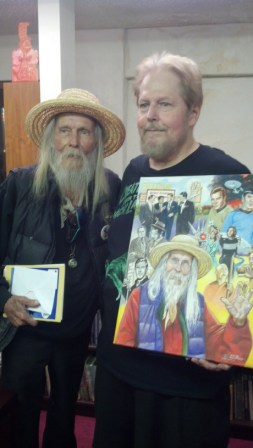 By John King Tarpinian: Today was the 86th birthday party for George Clayton Johnson. My head count was 52 souls. Some old friends, some fans. The surprise guest, who came up from that little convention down in San Diego, to wish George well was William F. Nolan. How’d Bill and George meet? Why at Charles Beaumont’s house, of course. Bill was impressed that George had just finished this movie script for Frank Sinatra, Ocean’s Eleven. They have been fast friends ever since.

They reminisced about their stay in that little hotel in Malibu while co-writing Logan’s Run. They talked about their acting in The Intruder, the only Roger Corman movie to have lost money at the box office. How they would make funny faces when standing behind the lead actor, William Shatner, as he spoke his lines. (If you have not seen this film you’d be surprised at how well it has held up, not to mention Shatner did a pretty good job acting.)

Denning Etchison and Peter Atkins read a few passages from George’s works. Many more stories where shared.  Questions were asked and answered.  Laughs were had by all.

George is one of those people who when you say his name a blank stare usually follows. Then you rattle off a short list of what he has done and eyes widen while smiles appear.

2 thoughts on “Where No George Has Gone Before”