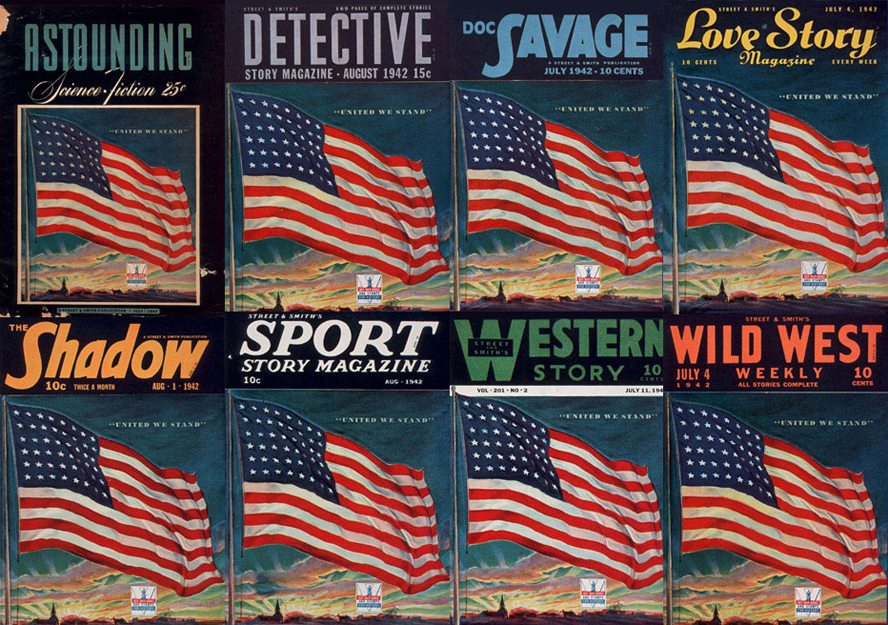 By James H. Burns: Americans have never needed a guidebook for courage. And the men who served in World War II were amongst the bravest citizens our nation has ever produced.

It didn’t matter if you were rich or poor, or what race or creed you encompassed. There was a wide array of delights simply waiting to be discovered.

Many youngsters, whether in the most rural climes or the toughest streets of our cities, took particular delight every day in the fictional exploits of such action heroes–and “do-gooders”–as Jack Armstrong (“The All American Boy”), Gangbusters, and The Lone Ranger.  (Other series, including Dick Tracy, Flash Gordon, and Jungle Jim, were based on popular newspaper comic strips.) 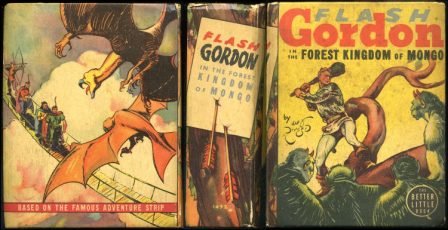 It was truly a meritocracy of joy — everybody, potentially, could join in on the fun.

On the newsstands in the 1930s was another miracle of the imagination: pulp magazines. The roughly 10-by-7 inch magazines featured novel-length tales, or collections of short stories, in virtually every category of prose.  But it was the adventure stories that again caught the attention of many kids.

The most popular heroes, always named in the titles of their periodicals, were highlighted by Operator No. 5 (a secret service agent); Doc Savage ( a superb athlete AND genius who spanned the globe thwarting “evil masterminds,” and whom many credit as a key influence on the comics’ Superman); G-8 And His Battle Aces ( World War I air force pilots); and the crimefighters  The Spider and The Shadow (the latter inspired by a successful radio series). 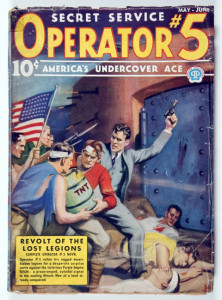 (These were magical monickers for a legion of our neighbors from coast to coast, in a time when more people seemed to take the time to read actual STORIES…)

Youngsters across the United States thrilled to this newest roster of exciting archetypes (often passing their magazines onto friends, widely increasing the publications’ already impressive circulation).

(No doubt, the radio shows had helped whet the country’s appetite for derring-do!)

For kids like my father, Hyman Birnbaum (later “Hugh Burns”), there was another phenomenon of fascination:

My Dad was as poor as a kid could be during the Depression, raised on the lower East Side of Manhattan, and in Brownsville, Brooklyn. (It was a period, my Dad remembered, when even the most devoted of fathers struggling to find a job could find himself on a bread line, trying to bring SOMETHING home for his family’s supper…)

But along with other teens, and men in their twenties, my father could be transported to the farthest reaches of the universe, or to the cusp of the development of a spectacular new scientific innovation.

(Having been weaned on Flash Gordon — in the comic strips, “Big Little Book” adaptations, and in the film serials starting Buster Crabbe!–my Dad’s favorites were Thrilling Wonder, Planet Stories,  and Astounding.)

Born in 1924 (like many other World War II vets), my Dad was exactly the right age for this burgeoning of  what was also called “extrapolative fiction”. (By 1939, many of science fiction’s soon to be legendary writers were making their professional debuts, including Robert A. Heinlein, Stanley G. Weinbaum, and Isaac Asimov…)

Just a few years later, my Dad was there marching with Patton’s troops, a decorated army infantryman, who also saw battle in the Hurtgen Forest, and the Ardennes.

(Ultimately, my father, like many other early science fiction fans, was drawn to a career in technology, becoming a mechanical engineer, and teaching at NYU, and for decades at CCNY, in Harlem.)

There can be no debate that my Dad, and all of his brethren in uniform, would have proved magnificent no matter what they read, or what radio shows and movies they enjoyed. But it seems likely that “the hero pulps” helped pave at least some of their paths to perceiving the merits of valor, and the benefits of serving a higher cause, to vanquish those who would both massacre liberty, and the people who embrace justice and freedom.

(I am certain that my Dad thought more than once of Flash Gordon and his exploits on the planet Mongo (pit against the treacherous “Ming the Merciless”), as he heard gunfire aimed in his direction.)

In fact, my father was still stationed in Europe, when American forces dropped the atom bomb on Hiroshima. He said that it was as though the future had suddenly come to life, despite the devastation–

A concept that had existed only in the pages of a magazine, now an everyday reality.

Thanks to all our fathers–and mothers!–who strove so well in the military, we’ve had the opportunity to flourish in the greatest Democracy the world has ever known–

In what was once simply–and with gallant foresight–a happy dream of tomorrow.

6 thoughts on “World War II, and a Lexicon in Time”