Opposing rallies will be held outside the San Jose Convention Center on Saturday afternoon, August 18, while the World Science Fiction Convention meets inside. The Worldcon committee has issued a statement that they and the San Jose police are aware of these events, recommending attendees avoid engaging the protestors.

Jon Del Arroz announced in May plans for a “Rally For Freedom And Anti-Discrimination Demonstration At Worldcon 76 San Jose” where he would be joined by Erin Sith, whom he describes as a “civil rights activist with a focus on the 2nd amendment”.

The event now renamed “Predators Out Now! Patriots Rally Against Pedophiles in SciFi” is listed on Facebook as being held in conjunction with the “San Jose National March Against Far-Left Violence” —

***this event is partnering with the National March Against Far-Left Violence happening the same day, and the program will include an open mic portion for testimony from people victimized at the Trump Rally two years ago at this location.***

An antifa counter-protest was announced a few days ago on a newly-created website, “Hate Not Welcome in San Jose”, scheduled for the same afternoon at the San Jose Convention Center:

Rally in support of immigrants, refugees, people of color, women, LGBTQ, and all others under attack by Trump’s agenda and his violent supporters

A mob of racists, fascists, neo-Nazis, and bigots are descending on our city to intimidate members of our community and forward their hateful message. These individuals are members of the fascist organization the Proud Boys as well as other groups of violent Trump supporters that are coming to San Jose from out of town. Members of the Proud Boys have been recorded making threats against immigrants at their rallies, including declaring that immigrants heads should be “smashed into concrete.” We are calling for a mass mobilization to send a clear message that their racism and bigotry will not be tolerated here. 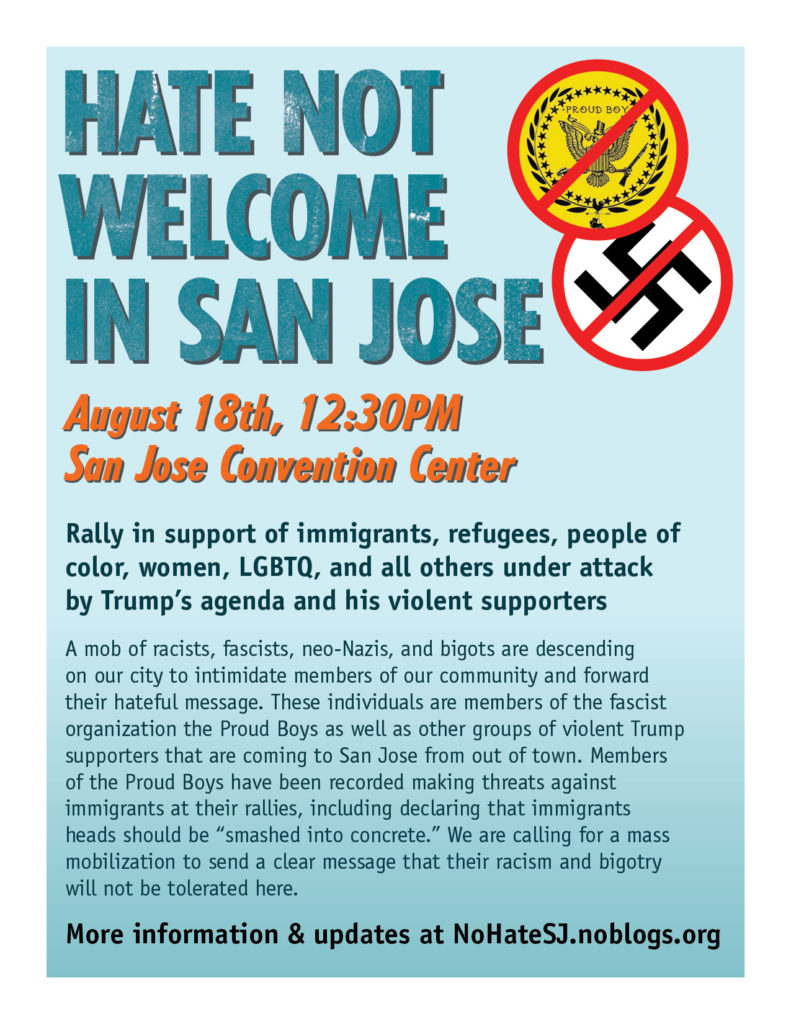 Worldcon 76 today advised members how to cope with the “Outside Event Taking Place on Saturday”:

Worldcon 76 in San Jose, the San Jose Police Department, and the McEnery Convention Center Security are aware of the protest and counter protest that are planned to occur on Saturday afternoon adjacent to the convention center plaza. The San Jose Police Department, the center, and Worldcon 76 have discussed how to ensure that these demonstrations do not impact events inside the center.

The best course of action to maximize your safety is to simply avoid engaging either the protestors or the counter protestors. We encourage our members to consider alternate routes and entrances to the convention center that avoid the front plaza on Saturday afternoon. Convention volunteers will be available to assist you in accessing the center through these alternate entrances. As with any other convention, only properly credentialed members will be allowed into our convention spaces.

If you have any questions about this you can email [email protected] or during the convention come by the Ombudsman office in room 112/113 or ask any staffer and they can direct you.

The rally is Jon Del Arroz’ most ambitious effort so far to leverage Worldcon 76 for attention, after being banned from attending and filing a lawsuit against the convention.

He says about Erin Sith:

As Del Arroz sees it, “Antifa is showing up to attack a rally by a Hispanic and a trans woman against pedophilia in fandom. Why are they pro pedophilia and attacking minorities? It’s almost as if the left is a bunch of racist bigots.”

Erin Sith has been involved in violent clashes between alt-right/neo-fascists and Antifa. An article on IndyBay (which identifies her by her legal name, Erin Smith) offers this take on the upcoming event:

On August 18, Erin Smith is organizing a rally outside of Worldcon, a science fiction convention. Smith has been known to show up at rallies to livestream and agitate crowds, filming activists to be doxxed later on by right wing internet trolls. Smith also attended the violent far-right rally in Portland on June 30th. She was filmed getting on top of someone who was on the ground, beating them while shouting homophobic
slurs.

Come join us August 18 in front of Worldcon76 as we protest the rampant sexual abuse in Science Fiction! https://t.co/vTaqK3Z866

Click the link to see footage of Sith beating a protestor in Portland.

Same footage, with better audio of the homophobic slur she was shouting.

1. Erin is a trans woman, the idea that she would attack someone for being gay is ridiculous.
2. They were wearing masks and throwing explosives her way.
3. The guy she tackled has a backpack full of explosives. She essentially stopped a domestic terrorist. https://t.co/zlVLlOD5wp

Del Arroz and Sith can be heard discussing the forthcoming rally in a YouTube video released August 9.

Update 08/12/2018: Learned Erin Smith is the person’s legal name, so the IndyBay story was not a “misidentification”.