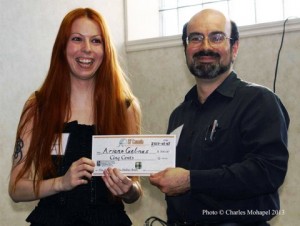 Ariane Gélinas, winner of the Aurora-Boréal Award for Best Novel, receives a presentation cheque for $500 from Jean-Louis Trudel of SF Canada. Photo (c) 2013 by Charles Mohapel.

The Aurora/Boréal Award winners were announced May 5 at the 30th Boréal convention in Montréal. The award recognizes the best works produced by Canadians in French in the speculative genres.

Aurora-Boréal Award for best related work
Solaris, the oldest genre magazine in Canada. The award was accepted by Joël Champetier, the magazine’s editor in chief.

Boréal award for artistic and audiovisual achievement
Ève Chabot, for illustrations in the magazine Brins d’éternité.

Boréal award for best fan publication
Brins d’éternité (which began the year 2012 as a fanzine and upgraded to professional status by the end of the year.)

The award is sponsored by SFSF Boréal Inc. and the Canadian Science Fiction and Fantasy Association, and the winners determined by a vote open to all who wish to take part.