Arrival (Paramount Pictures/Sony Pictures, 116 minutes) Directed by Denis Villeneuve. Screenplay by Eric Heisserer, based on the novella “The Story of Your Life” by Ted Chiang, Produced by Shawn Levy, Dan Levine, Aaron Ryder and David Linde.

I have no doubt that some of the nominees on the BDP Long Form ballot that will probably be slam dunks:  Star Wars: Rogue One, Doctor Strange, Star Trek Beyond  and (fingers crossed) Stranger Things. I will not be nominating any of the aforementioned films because I know they have their fans and they’ll get plenty of support.

However, I will be nominating one movie I want to be on the final ballot, one that towers above all the rest: Arrival.

Arrival has the top spot on my ballot this year and in my heart as well. Based on the Hugo and Nebula Award winning novella by Ted Chiang, it is expertly brought to life on the screen by screenwriter Eric Heisserer, director Denis Villeneuve and actors Amy Adams, Jeremy Renner and Forest Whitaker. It was honored by the Golden Globes and the Academy Awards with multiple nominations (and winning an Oscar for Sound Editing), it also serves as a brilliant textbook example of a successful adaptation from page to cinema.

The story of linguist Louise Banks (Adams) and her encounters with the mysterious aliens whose motives she’s trying to understand is not only intriguing, it’s also moving and full of love and empathy as well. As good as the other nominees in this category are, none of them can even approach Arrival, which will be considered a classic film in EVERY sense of the word in coming decades.

Extra: Here a link to an Entertainment Weekly feature on how Denis Villeneuve and Eric Heisserer worked on the screenplay.

The Expanse is based on series of novels by James S. A. Corey, the pseudonym of two authors, Daniel Abraham and Ty Franck, who also produce the show as well.

Spanning for a crowded Earth and Moon, Mars, the asteroid belt and beyond, this sprawling and exciting space opera is the best sf show produced for television since the heydays of Firefly and Babylon 5. Two hundred years in the future, several fractions of humanity are struggling for control and political power in the solar system. Little do any of them know that a much larger game is being played and that humanity’s survival is hanging in the balance.

The Expanse (and other excellent shows of this length, like HBO’s Westworld) are practically advertising for a change in the WSFS rules to establish a Best Dramatic Series award. Just Sayin’, folks…

NPR’s Cosmos and Culture called The Expanse the “Best Science Fiction Show in a Decade”.

One of the things that I have been meaning to do over the past few years is to nominate William Schafer for a Hugo Award.

I should have done it while Subterranean Press Magazine was still being published on a regular basis. (It published its final issue in the summer of 2014). Since he cannot be nominated as an editor, I will do so in the Best Related Work category.

William Schafer does not merely reprint classics and contemporary books, he masterfully commissions and creates magnificent works of art which immediately become THE treasured collector’s item of anyone’s book collection.

I should know since I own several of his books, including the ultimate edition of Harlan Ellison’s Deathbird Stories, The Jack Vance Treasury edited by Terry Dowling and Jonathan Strahan and Project Moonbase and Others, a collection of Robert Heinlein’s teleplays based on his own works.

Here is a list of the books published by Subterranean Press in 2016, which can be viewed on the SubPress website: http://subterraneanpress.com/

Many histories have been written about Star Trek, one of the most phenomenal, influential and culturally significant television shows of the 20th century. What makes Mark A. Altman and Edward Gross’ oral history of Star Trek so significant is that for the first time, nearly ALL of the participants get to tell the inside story of how the series and movies were made from their point of view.

It is breathtaking to read directly from the creators, producers, actors, writers, artists and fans on what happened and how it happened. And none of the participants, deceased or otherwise, spare any detail on the triumphs, mistakes, tragedies and screw ups that made Star Trek what it is today.

It would be a marvelous to reward Mr. Altman and Gross with a Hugo nomination for collecting these anecdotes, memories and interviews over the past thirty years to bring us the inside dope on one of our favorite indulgences…

Leonard Nimoy (actor, “Mr. Spock”) I went in to see Gene at Desilu Studios and he told me that he was preparing a pilot for a science fiction series to be called “Star Trek,” that he had in mind for me to play an alien character. I figured all I had to do was keep my mouth shut and I might end up with a good job here. Gene told me that he was determined to have at least one extraterrestrial prominent on his starship. He’d like to have more, but making human actors into other life-forms was too expensive for television in those days. Pointed ears, skin color, plus some changes in eyebrows and hair style were all he felt he could afford, but he was certain that his Mr. Spock idea, properly handled and properly acted, could establish that we were in the 23rd century and that interplanetary travel was an established fact.

William Shatner Captain Kirk and I melded. It may have been only out of the technical necessity; the thrust of doing a television show every week is such that you can’t hide behind too many disguises. You’re so tired that you can’t stop to try other interpretations of a line, you can only hope that this take is good, because you’ve got five more pages to shoot. You have to rely on the hope that what you’re doing as yourself will be acceptable. Captain Kirk is me. I don’t know about the other way around.

David Gerrold (writer, “The Trouble With Tribbles”) The problems with Shatner and Nimoy really began during the first season when Saturday Review did this article about “Trek” which stated that Spock was much more interesting than Kirk, and that Spock should be captain. Well, nobody was near Shatner for days. He was furious. All of a sudden, the writers are writing all this great stuff for Spock, and Spock, who’s supposed to be a subordinate character, suddenly starts becoming the equal of Kirk.

PHILIP KAUFMAN (Writer-Director: Planet of the Titans) I still remember the night when it was getting very close. I was then writing and I stayed up all night, but I knew I had a great story. I remember how shaky I was trying to stand up from my writing table and I called Rose, my wife, and I said “I’ve got it, I really know this story,” and right then the phone rang. It was Jerry Isenberg saying the project’s been cancelled. And I said, “What do you mean?” and he said, “They said there’s no future in science fiction,” which is the greatest line: there is no future in science fiction.

Excerpted from The Fifty-Year Mission: The Complete, Uncensored, Unauthorized Oral History of Star Trek: The First 25 Years © Edward Gross and Mark A. Altman, 2016 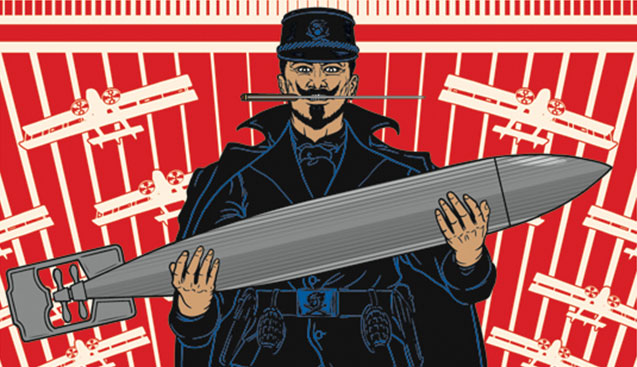 I am ashamed to admit that even though I work in a bookstore, my knowledge of the yearly offerings of short fiction is woefully inadequate. Annually, I depend on recommendation sites, word of mouth and the actual nomination lists to catch up.

BUT, this year, I have at least one recommendation: Bruce Sterling’s darkly comic novella, Pirate Utopia.

Set in a small Italian town of Fiume off the Adriatic coast after the First World War, a disparate group of artists, veterans, scientists, criminals and various political fanatics have come together to form the Free State of Carnaro which has dedicated itself to explore and exploit every form of libertine and social excess in every shape and form.

Based on a true story of a similar city that actually existed between 1920 and 1924, Sterling takes a small piece of obscure history and turned it into a brilliantly funny and by turns, grotesque piece of alternative-diesel punk history.

Among the cast of characters who are part of the action are Guglielmo Marconi (the inventor of radio), Benito Mussolini (as a newspaper editor!), Harry Houdini and H.P. Lovecraft (as American spies?), and Adolph Hitler and Joseph Goebbels (as innocent bystanders?).  The crazy quilt of a plot is just barely on the sane side of satire and is always twisting and turning in unexpected directions. Bruce Sterling deserves a lot of credit for turning many of the tropes of the genre of its head to make the story work.

Finally, a word about the artwork; all of the marvelous and madcap illustrations in Pirate Utopia are the work of John Coulthart, who also wrote an entertaining essay about how his work in the book  was influenced by Futurist artists of the period.

There a LOT packed into this little volume and it is quite a triumph for Bruce Sterling and Tachyon Press.