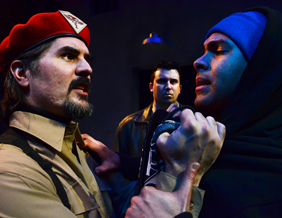 The stage production of City and the City, based on a China Miéville story, is in the midst of its run at Chicago’s Lifeline Theatre.  It opened on February 15 and closes April 7.

Inspector Tyador Borlú of the Extreme Crime Squad is assigned to a seemingly open-and-shut case: an American student found dead in the gutters of the city of Beszel. But soon this deceptively simple crime reveals ties to powerful political and corporate factions at the heart of both Beszel and its twin city, Ul Qoma. Forced to cross the divide between two city-states coexisting in the same geographical space yet separated by irreconcilable cultural differences, Borlú must bring to justice the mastermind of the most unusual and dangerous case of his career.

When James Bacon attended Capricon in February he got to listen to director Dorothy Milne, adapter Christopher M. Walsh and marketing director Rob Kauzlauric speak about bringing Miéville’s work to the stage.

[I] wonder about how the two cities will be discriminated, and it is explained that colours, costumes props and movement all go into that process of identifying the each city, the quality of light and a less subtle ‘shade of blue’ which is mentioned as legal in one, illegal in another in the book, is something that is latched upon. Also accents are used to discriminate from non city people.

Miéville himself will be at the Lifeline Theatre on Saturday, March 16 for a book signing in the lobby at 7 p.m. He’ll hold a conversation with the audience, cast, and production team immediately after the 8 p.m. performance. His book signing and Q&A’s are free.