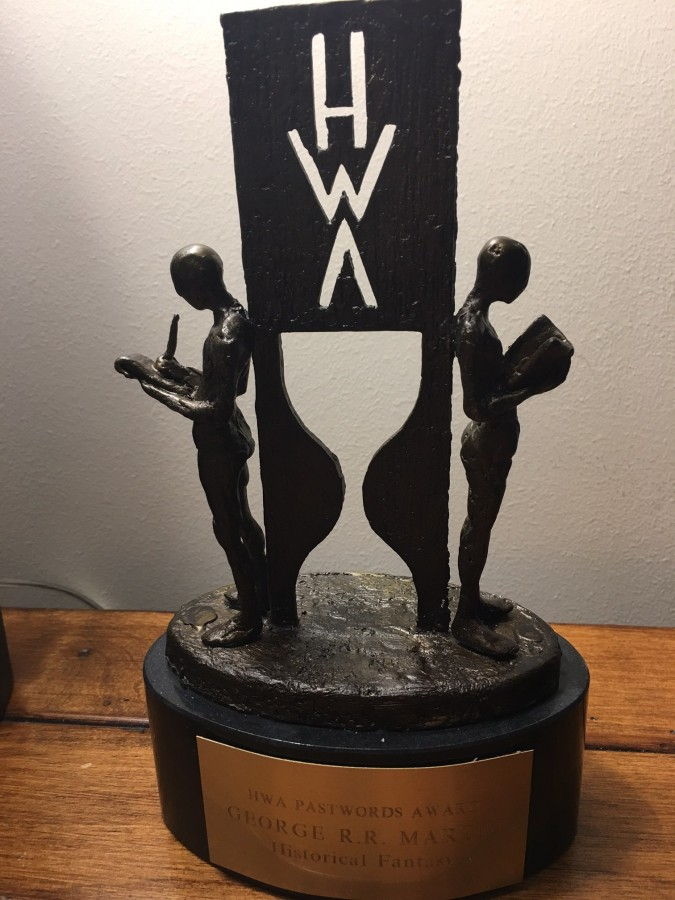 Historical Writers of American PastWords Award. Photo from Not A Blog.

The Historical Writers of America (HWA), an organization for all historical writers, fiction and nonfiction, presented the initial set of PastWords awards at a banquet in New Mexico on September 23.

HWA created the PastWords to recognize creators who have produced an outstanding body of work. The 2017 winners include:

Several of the winners are well-known to File 770 readers. Two I needed help recognizing are Sides and James McMurtry —

Acclaimed journalist and author Hampton Sides has written about Kit Carson, North Pole explorer George Washington De Long, and Martin Luther King Jr.’s killer in Blood and Thunder, In the Kingdom of Ice and Hellhound on His Trail.

Songwriter and guitarist James McMurtry’s albums include “Too Long in the Wasteland,” “Saint Mary of the Woods” and “Complicated Game.” Awards committee chair Paul Davis said, “McMurtry may not seem an obvious choice for a group focused on history, but his characters are often haunted by the past: a vanishing America, the dust kicked up by a Midwest combine, a rekindled romance in the old part of town. Stephen King called him one of America’s fiercest songwriters. We agree.”

George R.R. Martin was one of the few winners present to personally accept his award. He wrote on Not A Blog:

…I’m told the award was designed by Gage Prentiss, the artist who designed the H.P. Lovecraft Statue that’s to go up in Providence…

In any case, I appreciate the award, and all the kind words about my work. It’s kind of cool to learn that even writers of honest to god real historical fiction and non-fiction enjoy my own fake histories.