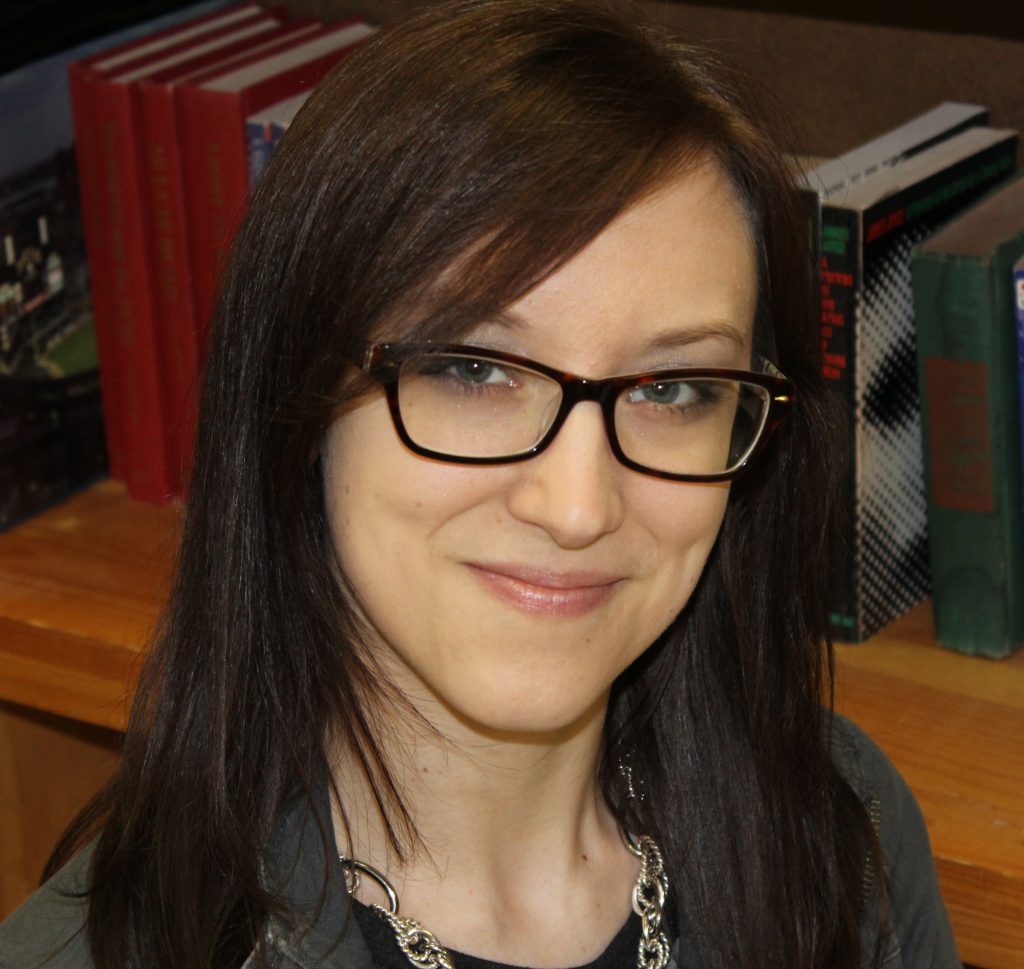 By Carl Slaughter: Remember Dean Wesley Smith’s Star Trek anthology series?  It’s back, minus Smith, and not coincidentally on the 50th anniversary.  New author and Michigan creative writing teacher Kelli Fitzpatrick broke in through Simon & Schuster’s Strange New Worlds contest.  Her story, “Sunwalkers,” is based on a Season 7 of Next Generation and is about Dr. Crusher dealing with the departure of her son while simultaneously responding to a medical crisis on an alien world.  Fitzpatrick followed this by writing a review of the Season 3 episode “Ensigns of Command” for the forthcoming Outside In anthology.

Carl Slaughter:  How did you get interested in Star Trek?

Kelli Fitzpatrick:  I grew up watching Voyager with my Dad. He also had boxes of Star Trek books which I loved reading (and still do). As an adult, I once went camping just so I could read Star Trek novels for three days straight, uninterrupted.

CS:  How did you get interested in writing science fiction?

KF:  Science fiction was the genre that captured my imagination when I was scouring libraries for reading material as a teen. There’s something inherently optimistic—and important—about looking to the future of our world and envisioning what might be. I enjoy inhabiting that creative space.

CS:  How did you find out about the Strange New Worlds contest?

KF:  I found out about Strange New Worlds by searching for writing contests online (I participate in quite a few of them). When I saw it was a Star Trek related contest from the official publisher of the franchise, I was in.

CS:  What were the submissions guidelines?

KF:  The submission guidelines were essentially to submit a story between 7,000 and 10,000 words based on any of the Star Trek TV series or films (minus the animated series and the new alternate timeline films). The contest encouraged creative, engaging stories that fill gaps in the existing narrative, that might easily fit into the universe as untold episodes.

CS:  What’s the gist of “The Sunwalkers”?

KF:  My winning story, “The Sunwalkers,” is set in late Season 7 of The Next Generation, picking up right after “Journey’s End.” At the end of that episode, Doctor Crusher must suddenly say goodbye to her son, Wesley, and I wanted to have her explore the emotional fallout from such a loss, which is never really dealt with in the series. In my story, she must also simultaneously deal with a medical crisis on an alien world. There’s some action and some touching moments—overall I really like the way the story turned out. 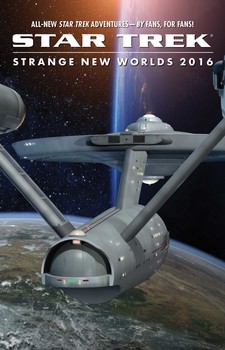 CS:  Didn’t Dean Wesley Smith do Strange New Worlds anthologies for a while?  Wasn’t that discontinued?  Is there a connection?

KF:  Yes, there were ten volumes of the Strange New Worlds anthologies issued by Pocket Books prior to this one. I own all ten of them—there are some fantastic stories from very talented writers in those pages, including my good friend Derek Attico who is featured in SNW 8 as well as in the current edition. The reason to relaunch the contest with slightly different guidelines was not specified by the publisher, although the release did coincide with Star Trek’s 50th anniversary.

CS:  What is Outside In: The Next Generation?

KF:  Outside In: The Next Generation is a forthcoming print anthology of episode reviews from ATB Publishing that will contain a review of every single episode of TNG, each written by a different writer. The reviews can be creative in format (such as recipes or log entries), with many being humorous, and all are meant to illuminate some significant or thought-provoking aspect of the episode. One of ATB’s previous volumes—Outside In Boldly Goes—which reviewed all episodes of TOS, was extremely fascinating to read and included contributors such as Larry Nemecek and Robert Greenberger.

CS:  What’s the gist of “Not Lost in Translation: The Ensigns of Command”?

KF:  I was honored to be invited to contribute to the Outside In: TNG anthology, and I chose to review the Season 3 episode “The Ensigns of Command,” in which Data must convince a group of human colonists to evacuate Tau Cygna V before the Sheliak arrive and take their planet back by force. The angle of my review focuses on analyzing the language theme of the episode, which manifests in several unexpected ways.

CS:  Do you write a lot of Star Trek fan fiction?

KF:  No. I loved writing my Strange New Worlds story, and hope to write more Trek stories in the future, but I would prefer to do so through officially licensed opportunities. In the meantime, I’m hard at work on original fiction and poetry.

CS:  What other type of Star Trek fan activity do you participate in?

KF:  I’m fairly active in online circles of Star Trek writers and commentators, who happen to be some of the most amazing, hilarious, kind-hearted professionals I’ve ever had the pleasure of meeting and learning from. I regularly attend conventions like ComicCon, and have just been scheduled as an Author Guest for Shore Leave 39.

CS:  How do you use Star Trek to teach writing to high school students?

KF:  Star Trek has informed and inspired my teaching in two capacities: providing great role models, and instilling in me an unquenchable thirst for exploration, which I strive to pass on to my students. Captain Janeway has always been a role model of mine in that she is a force to be reckoned with in her professionalism and drive, yet also has a big heart and a fiercely firm conscience. That is very much a description of how I run my classroom. Doctor Crusher inspired me to learn to work well under pressure, and to go above and beyond to help those in my care, which I believe is a necessary trait of any good educator. Learning is all about exploring unknown ideas, and there is no frontier so vast and teeming with new discoveries as the stars, or the blank page; that’s why my classroom library is space themed, with Hubble images hanging over my walls of books. I want my English students and the students in my writing club to yearn for understanding—of themselves and of the universe—and that is the core wonder Star Trek is built around.

CS:  Do you write any type of science fiction other than Star Trek?

KF:  Yes! I have written several science fiction short stories and flash fiction pieces, one of which—“To Stick a Star”—took 4th place in the international NYC Midnight Flash Fiction Challenge this year. Several of my stories are currently under submission to sci-fi magazines, and I’m working on several more, as well as novels in the genres of sci-fi, fantasy, steampunk, and YA. While I have written in almost every genre imaginable, sci-fi will always be my first love, and I’m proud to have joined the ranks of writers who help shape the way humanity views our future and our place in the cosmos.