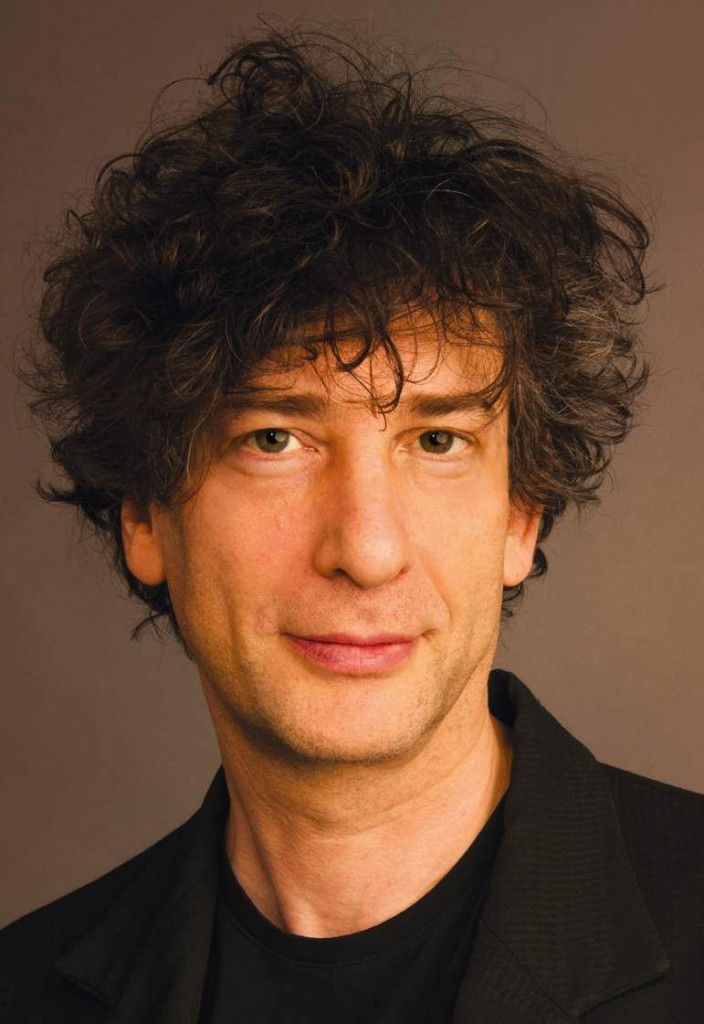 So I was very surprised when the least likely source for literary news ever—Groupon—announced that Gaiman would be in Washington on May 1, and if you wanted to see him it would be $36 for a seat in the orchestra or $32 for the upper deck.

“Well, this is what happened when you marry a rock star,” I told myself. “The guy used to do book tours—now he just does tours!”

According to Groupon, “What you’ll get from an evening with Neil Gaiman: fanboy/girl giddiness as the master raconteur reads stories and poems, then holds a Q and A.”

I haven’t experienced “fanboy giddiness” since I was last in a room with Brian Aldiss. And $32 just to listen to a guy talk was a bit expensive.

But I had read Anansi Boys this winter and enjoyed it. I also knew that Gaiman was very good at reading his own fiction. I also couldn’t think of any other novelist whose market was big enough that he could charge for people just to listen to him. People will pay to hear Malcolm Gladwell tell them how to succeed in the office, but I couldn’t think of another novelist who was that popular. So I pushed the buy button on Groupon and went.

Gaiman said that for The Ocean at the End of the Lane tour he and the organizers tried to book 1,500 seat halls to limit the post-lecture signing. This time Gaiman was booked in DAR Constitution Hall, which seats about 3,000, and which normally hosts mid-size acts such as Kristin Chenoweth or Josh Groban. (Following Gaiman at Constitution Hall were the stars of ABC’s “Nashville.”)

Booking Gaiman at Constitution Hall was a mistake, which is why Groupon and other discounters were called in. I estimate that the theatre was half full, and probably 500 tickets were sold through discounters. But that still means that a thousand people paid $50-60 to hear Gaiman, and everyone paid full price for the Gaiman books on sale in the lobby (all of which were signed). So Gaiman got a five-figure payday for his talk.

I didn’t recognize anyone at the lecture. The event conflicted with WSFA’s annual election meeting.

So what happened? The evening began with a gushy and superfluous introduction by author Keith Donohue. Then Gaiman talked for 90 minutes without a break. He read two short stories and an excerpt from Good Omens, and spent the rest of the time answering questions submitted in advance. He answered all of them except for the one doofus who asked Gaiman to sing “Happy Birthday” to his girlfriend. This Gaiman politely declined to do.

Gaiman answered the audience’s questions in bunches, so I’ve organized his responses here.

What was it like to work with Sir Terry Pratchett? Gaiman read an excerpt from Good Omens, which he said he did not do while Pratchett was alive. He explained that in the late 1980s he wrote a fragment called “William the Antichrist,” which he dropped to work on “The Sandman.” One day he got a call from Pratchett, who asked, “Are you going to work on this or can I buy it from you? I know what happens next.”

“Would you turn down Michelangelo if he asked you to work on a ceiling?” Gaiman said. So they worked, with each author doing sections and then having the collaborator edit. Gaiman, who worked at night in those days, recalled waking up at 1 in the afternoon to have many messages on his answering machine from Pratchett with suggestions. They also spent a lot of time on the phone reading and laughing at new sections. After reading an excerpt, Gaiman noted the small bit Pratchett added, saying that Pratchett told him, “I’ve just made this section 17.5 percent funnier.”

Forthcoming Hollywood projects: Gaiman said he would fly to Los Angeles next week to take a meeting with Bryan Fuller, who created “Hannibal,” to pitch a series based on American Gods to the Starz network. Two scripts have already been written. As for “Sandman,” Time Warner owns that property, but there are scripts in various drafts and Joseph Gordon-Levitt is attached to the project in some way.

Writing advice: Gaiman’s goal as a writer is to write whatever he feels like writing without being typecast. As a journalist in the 1980s, Gaiman interviewed many authors who regretted not being able to work on a favorite non-genre project because they were locked into writing mysteries or sf. Gaiman vowed not to do that. One reason why he wrote American Gods after Neverwhere and Stardust was so he wouldn’t be typecast as a guy who wrote urban fantasies set in Britain.

He also cautioned that there was no such thing as “writer’s block,” which was simply writers who were stuck at a particular place. Think about it long enough, he said, and you’ll eventually be unstuck. No other profession, he said, had workers claim they were “blocked” when they couldn’t do their jobs. “Do shoe salesmen have ‘shoe salesmen’s block?’”

Amanda Palmer: Neil Gaiman’s wife is currently 4 ½ months pregnant and Gaiman, who has a 31-year-old son, says he is trying to remember how to do things like changing diapers. Gaiman’s longer anecdote about his wife came after he read a story that was commissioned by “This American Life” and rejected. Instead, Gaiman wrote an article that he read on the air about how he doesn’t have adventures.

“This American Life” host Ira Glass then interviewed Gaiman about what he did the morning of the interview.  Gaiman explained that he and Palmer were at the Museum of Fine Arts in Boston, taking in the Degas exhibit, when Palmer had a sudden desire to be sketched in the nude just like women did in the nineteenth century. So she stripped in the gallery and Gaiman sketched. They carefully placed coffee cups over the security cameras so the guards wouldn’t see what was going on.

“Are you lying?” Glass asked. Gaiman coyly didn’t answer whether this actually happened or he was just pulling Glass’s leg, but said, “It’s my wife that has the adventures.”

When did he make it as a writer? Gaiman said he asked Stephen King this question in 2012 and King said, “1989”—fourteen years after Carrie was published. Gaiman said that for him the moment came in 2009, when he was in Los Angeles and his personal assistant woke him in his hotel room and told him that he’d better be ready, because in five minutes he’d get a call saying he had won the Newbery Medal for The Graveyard Book—and not just the honorable mention, either, but the big prize.

Gaiman decorously accepted the award, and proudly noted that he managed to accept the prize from the librarians who hand out the Newbery without using obscenities—which those of us who saw him accept his Hugo for American Gods realize is hard for him.

Writing for young adults: On The Ocean at the End of the Lane tour, Gaiman said he was proud to meet women in their twenties who had read Coraline as teenagers and had told Gaiman that his book had helped them deal with teenage stresses.  He also noted that he got many of his ideas for YA stories from his children. “The Wolves in the Walls” got its start when Gaiman’s daughter told him she was terrified wolves would emerge from the walls and attack her—and she could point to the exact spot on the wall where the wolves came out.

The Graveyard Book had its roots on how Gaiman’s son was at the stage where he really enjoyed riding his tricycle. Gaiman was worried that something bad might happen to his son (“I’d seen The Omen”) so they went to a nearby graveyard, where his son could safely pedal away while Gaiman read. But what if there was a book like The Jungle Book set in a graveyard? Where a kid could go and have adventures with his graveyard friends? That’s where the idea for The Graveyard Book began.

What does he read when he’s depressed? When Gaiman was a child, repeated readings of Tolkien and C.S. Lewis’s Narnia books cheered him up. As a teenager, he, for some reason, re-read Heinlein’s Glory Road. Now in gloomy times he repeatedly re-reads Flann O’Brien’s The Third Policeman, James Stephens’s The Crock of Gold, and the novels of R.A. Lafferty.

So how was Gaiman? He was entertaining. As Groupons go, Gaiman’s lecture was better than average.

And now that I have a signed copy of Good Omens, I’d better read it!