By Mark L. Blackman: On the evening of Tuesday, September 9 the New York Review of Science Fiction Readings Series opened its 24th season with its first-ever readings outside Lower Manhattan – and its first-ever readings in Brooklyn. The special venue for the event was the Commons Brooklyn, 388 Atlantic Ave., debatably near the Barclays Center.  (If the address sounds familiar, WBAI (99.5 FM) currently has administrative offices on the 3rd floor.) Beyond crossing the East River, the theme of the evening was crossing genres; the featured readers were Walter Mosley, a mystery author who has written sf, and Paul Di Filippo, an sf author who has written mysteries.  (Neither are strangers to the Series.)

Jim Freund, the Series’ Executive Curator and the host of WBAI’s Hour of the Wolf radio program on sf and fantasy (broadcast and streamed Wednesday nights/Thursday mornings from 1:30-3:00 AM), opened the event – and the season – by welcoming the audience and guests, and announcing the next several readings. Returning to the Series’ usual venue, the SoHo Gallery for Digital Art on Sullivan Street in Manhattan, on Tuesday, October 7, the readers will be Paul Park and James Morrow; on Tuesday, November 4 (Election Day), John Langan and Nicholas Kauffmann, with Amy Goldschlager guest-hosting; and Tuesday, December 2 will be the Series’ annual Family Night, as traditional, featuring Ellen Kushner and Delia Sherman, likely back at the Commons. He also announced his intention to start up an annual Margot Adler Memorial Vampire Reading. (Adler was the creator/original host of Hour of the Wolf, and guest-curated an evening of vampire-themed readings for the NYRSF Series.)

Freund then introduced the first reader, Paul Di Filippo, the author ofThe Steampunk Trilogy, Ribofunk andCosmocopia (just released as an ebook on openroadmedia.com), who had come down from “Lovecraftsville” — that is, Providence, RI. 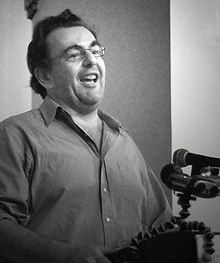 Di Filippo’s offering was an oddly amusing near-future story (Malia Obama is alluded to as Secretary of State), “A Deeper, Faster Nowt,” whose titular beings (short for “Now-Tweakers”) are an eccentric neurosurgically-improved breed of humans whose perception borders on the precognitive. For an encore, he shared a humorous flash-fiction, also future-set, “Di Modica Berserker,” in which “house-laying” machines, sort of super-3-D printers, are hacked by the Anti-Ticky-Tack League (as in the well-known song, the houses previously churned out are identical and devoid of human creativity) and go wild. (The audience recognized as well the allusion to Fred Saberhagen’s alien killing machines.)

During the intermission, a raffle was held for a couple of swag bags donated by Open Road Media, following which Freund turned the podium over to the evening’s second reader, Walter Mosley. 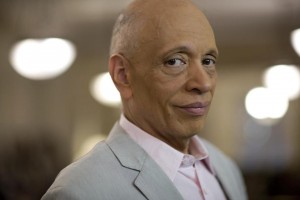 Mosley, best-known as the author of the Easy Rawlins series of crime novels (of which the first is Devil in a Blue Dress), has also written speculative fiction, Blue Light and Futureland, among others.  He is the recipient of numerous awards, including a Shamus Award, an O. Henry Award, the Anisfield-Wolf Book Award, a Grammy, and PEN America’s Lifetime Achievement Award.  (Moreover, he garnered public notice when Pres. Clinton was spotted with a copy of Devil in a Blue Dress, ironic in view of his later notorious encounter with a blue dress.)

Currently a Brooklynite, Mosley had a shorter trip than Di Filippo. Regarding writing crossgenre, he quipped that, growing up, he saw that sf writers were the smartest people, so he began writing sf because he wanted to be smart. He treated the audience to the opening of his novel Jack Strong, in which the protagonist moves through a series or patchworks of identities.

The audience of about 50 included Chris Claremont, Beth Fleisher, Richard Friedman, Amy Goldschlager, Barbara Krasnoff, John Kwok, Lissanne Lake, Sheri Lane (Elizabeth Crowens), Robert Rodriquez, James Ryan, Terence Taylor and Bill Wagner.  While the quite comfortable chairs did not fold, ritual could not be totally escaped; they needed to be stacked. Afterward, Freund, Di Filippo and members of the audience adjourned to Bijan’s, a nearby bar and restaurant with a Persian motif.