Editor’s Note: There will be no Pixel Scroll on Saturday because I will be away at an event all day. I have scheduled a few other tender morsels to keep the conversation rolling.

It struck me because one of the really interesting things about having a lot of people talk about my work these days is that I see quite a few folks say very straightforwardly that I obviously intended such and so an effect, or obviously intended to convey one or another moral or lesson, that it was plain and obvious that I was referring to this that or the other previous work, or to some historical or current event or entity. And often I come away from such assertions wondering if maybe they’re talking about a different book by a different author, that just happen to have the same names.

I’ve also seen quite different assessments of my sentence-level writing, which I find super interesting just on its own. It’s elegant! It’s beautiful. It’s muscular. It’s serviceable. It’s clunky. It’s amateur. Even more interestingly, it’s transparent, or else it’s emphatically not going to please the crowd that valorizes transparent writing. That’s super interesting to me.

(2) DOUBLE BILL IN HUNTSVILLE. “What’s Up, Doc? The Animation Art of Chuck Jones” has started a three month run at the Huntsville Museum of Art in the Rocket City of Huntsville, Alabama.

The exhibit is laid out in seven sections, each highlighting a component of Chuck Jones’s career as an animation director and artist, and features more than 136 original sketches and drawings, storyboards, production backgrounds, and photographs.

“What’s Up, Doc?” is running simultaneously with “My Hero: Contemporary Art & Superhero Action”, the latter showing through mid-December.

Comic books and cartoons. The very essence of childhood; words that conjure up a much simpler time in life. Waking up on Saturday morning, eating a bowl of Honeycombs cereal while watching Roadrunner outsmart Wiley Coyote yet again. Not so patiently waiting for the latest issue of Superman to see how he defeats the bad guy.

Of course, that was a long time ago.

Now you are expected to have a more sophisticated, refined palate. Your Saturday morning excitement should be something more like checking out an exhibit or two at the art museum.

But what if you could combine the two?

Guess what? For the next couple of months, you are in luck! The Huntsville Museum of Art’s two newest exhibits, “My Hero” and “What’s Up, Doc?” are guaranteed to excite both the kid and adult in you.

My Hero commemorates and seeks to re-envision the lives of iconic superheroes we all know and love. 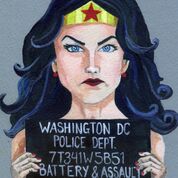 (3) AUTOGRAFACSIMILES. Someone on eBay is asking $3,100 for Morojo’s fanzine reproducing autographs obtained from sf/f pros at the first two Worldcons:

STEPHAN THE STfan.  IN 1939, THE YEAR OF THE FIRST WORLD SCIENCE FICTION CONVENTION, SCI-FI FAN “MOROJO” (MYRTLE DOUGLAS) PRINTED THE FANZINE “STEPHAN THE STfan” WHICH WAS A SMALL PAMPHLET OF (I BELIEVE) 6 PAGES.  IT OFFERED REPRODUCTIONS (CALLED “AUTOGRAFACSIMILES”) OF THE SIGNATURES OF FAMOUS SCI-FI PERSONALITIES FROM THE COLLECTION OF FORREST J ACKERMAN.  I HAVE NOT REPRODUCED THE FACSIMILE PAGES.  BLANK PAGES WERE LEFT “TO SECURE SIGNATURES OF YOUR FRIENDS AND THE FAMOUS ONES ATTENDING THE CONVENTION.”  THE SCANS I’VE PROVIDED ARE ALL ORIGINAL SIGNATURES.  140+ SIGNATURES.  AMONG THE FAMOUS SIGNATURES OBTAINED AT THE 1st AND 2nd SCI-FI CONVENTIONS (AND THESE ARE ONLY A FEW) ARE:  A. MERRITT, ISAAC ASIMOV, EDMOND HAMILTON, JACK WILLIAMSON, OTTO BINDER, RAY CUMMINGS, LEO MARGULIES, FARNSWORTH WRIGHT, JULIUS UNGER, LLOYD ARTHUR ESHBACH, ALDEN ACKERMAN, MOROJO, POGO (PATTI GRAY), RAYMOND A. PALMER, ROSS ROCKLYNNE, EDWARD E. (“DOC”) SMITH & WIFE, E. EVERETT EVANS, FRED POHL (WITH HIS ZERO WITH A SLASH THROUGH IT), ROBERT A.W. “DOC” LOWNDES, DON WILCOX, G.S. BUNCH JR., RALPH MILNE FARLEY, JERRY SIEGEL, ROBERT MOORE WILLIAMS, JULIUS SCHWARTZ, DAVID KYLE, CYRIL KORNBLUTH, & SO MANY MORE!  ALMOST ALL 140+ SIGNATURES ARE SURPRISINGLY LEGIBLE, SEE THE SCANS FOR THE REST.  ALSO INCLUDED ARE SIGNATURES FROM THE 2nd RELEASE OF STEPHAN THE STfan (DATED SEPT 1, 1940).  (NOTE: ALDEN ACKERMAN WAS FORREST J ACKERMAN’S BROTHER, WHO DIED IN THE BATTLE OF THE BULGE JAN 1, 1945.  FORREST J ACKERMAN’S SIGNATURE WAS NOT INCLUDED SINCE HE WAS THE PERSON OBTAINING THE SIGNATURES.  THERE WERE ONLY 3 WORLD SCI-FI CONVENTIONS BEFORE WORLD WAR II (1939, 1940, 1941).  THE NEXT WAS #4 IN 1946.  THESE SIGNATURES WERE OBTAINED AT THE 1939 AND 1940 CONVENTIONS PERSONALLY BY FORREST J ACKERMAN.  THIS ITEM WAS ORIGINALLY FROM HIS FAMOUS COLLECTION, A ONE-OF-A-KIND ITEM FROM THE EARLY HISTORY OF SCIENCE FICTION.    SINCE THE PAGES WITH THE SIGNATURES ARE DETACHED, I AM NOT POSITIVE THAT ALL THE PAGES ARE HERE–BUT, AFTER ALL, THERE ARE 140+ SIGNATURES.   THE FIRST WORLD SCI-FI CONVENTION WAS ATTENDED BY 200 PEOPLE.  THE 2nd WORLD SCI-FI CONVENTION WAS ATTENDED BY 128 PEOPLE.

Did you hear? The Nintendo Entertainment System is back, and it’s cuter than ever.

The new NES Classic Edition (aka NES Classic Mini) is an official Nintendo product that crams 30 of the company’s most beloved games into a miniature version of the hit ’80s game system. It fits in the palm of your hand. It comes with an HDMI port so it can plug into a modern TV, and a freshly manufactured NES gamepad for that old-school feel.

And when it ships on November 11 for just $60, £50 or AU$100, it could also be an unbeatable deal: we ran the numbers, and you can’t get this many retro Nintendo games anywhere else for the money.

Trump’s foreign policy answers sound like a book report from a teenager who hasn’t read the book. “Oh, the grapes! They had so much wrath!”
— Antonio French (@AntonioFrench) October 20, 2016

That crack caused #TrumpBookReport to trend as Twitter users wondered what would happen if the Republican presidential nominee ? who has said he’s too busy to read many books ? really was a teen giving a report about a book he hadn’t read.

Here are some of the best (edited by AP to include only the genre book ones; read the actual post for the full effect):

There’s a Lord-and he’s got rings. Lots of rings. The best rings. And two of the best Towers anyone has seen. #trumpbookreport
— Karl H. (@ageofkarl) October 20, 2016

It took Low Energy Harry Potter 7 books to defeat Voldermort. Sad! I would have beat him in the first book! #TrumpBookReport
— Historical Trump (@HistoryDTrump) October 20, 2016

Voldemort was a bad guy, okay. He was a bad guy. But you know what he was very good at? Killing Muggles. #TrumpBookReport @AntonioFrenchhttps://t.co/eJBMhUlCPg
— Historical Trump (@HistoryDTrump) October 20, 2016

“So much hunger, many hungry people, and far too many games. Hard to play with so much, too much, quite frankly, hunger.” #TrumpBookReport
— Doug B (@dougbstl) October 20, 2016

(8) INDUSTRY HUMOR. Andrew Porter recommends Publishers Weekly’s “Tales from the Slush Pile”. “There are dozens of these available, and they’re really hilarious.” “Tales from the Slush Pile” is an original comic strip that follows the trials and tribulations of a children’s book writer and his friends. Its creator, Ed Briant, has written and illustrated a number of picture books, comics and graphic novels.

The university is collecting applications from English professors to fill the position now. The appointment is set to begin in August and is a five-year, renewable term. The university says the position is tenured and designed to honor the UMaine English department’s “most celebrated graduate.” The school says the position will have undergraduate education as a central focus. King graduated from the university in 1970 with a degree in English. His first novel, “Carrie,” was published four years later, and he has been one of America’s most beloved horror and fantasy authors for four decades.

The position is partially endowed by the Harold Alfond Foundation.

As a well-known guitar, keyboard player and singer with “Beatles For Sale,” he sang and entertained many with endless cover songs of the much-loved Beatles with the band he’d been a member of for nearly 10 years. He also was an author with his completed novel, “Nesters,” and several other short stories that were published.

Dennis was also a published horror author and had sold numerous short stories to various horror magazines around the country. He was a member of the Horror Writers’ Association.

[Thanks to John King Tarpinian, Andrew Porter, and Marc Criley for some of these stories. Title credit belongs to File 770 contributing editor of the day Bruce Baugh.]