To show my appreciation for you, my readers, here’s a short story I wrote to read aloud while I was touring with The Consuming Fire. It’s called “Automated Customer Service,” and it’s what happens when, in the near future, something goes wrong with a household appliance and you have to navigate an automated call system to get help….

…The automated system has detected that you are using high levels of profanity right now. While the automated system is in fact automated and doesn’t care what you yell at it, your bad attitude is being noted for if and when you are put in contact with a human representative. When you have calmed your sassy boots down a bit, press one….

(2) DESTINY UNLOCKED. NPR finds a sentimental story behind this book purchase: “Bookstore’s Tweet On The Sale Of A Children’s Book After 27 Years Goes Viral”.

A bookstore in England sold a children’s biography of William the Conqueror that had been sitting in its shop since 1991.

“I have just sold a book that we have had in stock since May 1991,” the Broadhursts Bookshop tweeted. “We always knew its day would come.”

The store’s tweet about the sale has since gone viral and received thousands of replies. Author Sarah Todd Taylor tweeted in response, “The book held its breath. It had hoped so often, only to have that hope crushed. Hands lifted it from the shelf, wrapped it warmly in paper. As the door closed on its past life, the book heard the soft cheers of its shelfmates.”

(3) ASPIRATIONAL GAMING. For everyone who doesn’t have this tech in their living room: “Game on! Pro video gamers open pop-up play space on Atlantic Ave. in Boerum Hill” — Brooklyn Paper has the story.

A team of professional video gamers opened up a pop-up shop on Atlantic Avenue where experienced nerds can pay by the hour to dominate noobs on top-of-the-line gaming equipment, according to the group’s game-player-in-chief.

“We’re offering the opportunity to have a really truly premium gaming experience over here on some of the nicest computers in the world,” said Ben Nichol.

Nichol, who die-hard gamers may recognize for streaming his gaming exploits as Mr. Bitter on Youtube, now spearheads events and business development for pro-gaming squad New York Excelsior, which set up the temporary NYXL play space between Nevins Street and Third Avenue that features 34 top-of-the-line HP Omen gaming desktop computers, which at roughly $3,000 a piece, are each roughly equivalent in value to a well-maintained 2006 Volkswagen Jetta.

(4) TRANS-ATLANTIC FAN FUND. At midnight on November 22 the TAFF nominating period ends. There is still time to declare your candidacy to become the delegate to the Dublin 2019 Worldcon. See the TAFF homepage to learn what you must do to enter the race.

(5) I AM BATWOMAN, HEAR ME ROAR. This year’s CW crossover event in their “Arrowverse” set of shows now has a comic book cover to go along with it (io9/Gizmodo: “The DC/CW Elseworlds Crossover Gets the Mashup Comic Cover It Deserves”). Elseworlds will link up episodes of The Flash, Arrow, and Supergirl on December 9-11, 2018 and will introduce Batwoman, Lois Lane, and Gotham City to the connected universes. There are minor spoilers (most of all of which have already been shown in the various trailers for Elseworlds) in the io9/Gizmodo article:

As well as depicting Supergirl, Superman (not in his new black suit), Batwoman, and the bodyswapped versions of Green Arrow and Flash, the cover includes LaMonica Garrett lurking in the background as the Monitor, and our first look at Jeremy Davies’ character, Doctor John Deegan, a mysterious figure who works at Arkham Asylum and is apparently the catalyst that brings our heroes together and to Gotham in the first place.

(6) TIME WANTS TO BE FREE. BBC remembers “The clock that cost its inventor millions” (but saved him from Douglas Adams’s scorn) — 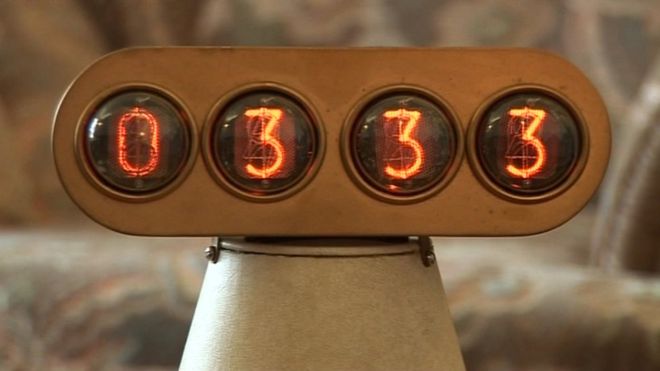 One of the world’s first digital clocks, which was made by a man in his shed, has been sold at auction.

Thomas Bromley, an engineer and amateur inventor, created his Digitron Electric Clock in 1961 at his home in Hull.

He held the patent to the design for three years but chose not to renew it – potentially costing him millions of pounds.

(7) TOLKIEN/LEWIS DOCUMENTARY RESUMES PRODUCTION. The documentary film series, A Hobbit, a Wardrobe, and a Great War, explores how the experience of two world wars shaped the lives and literary imagination of two authors and friends, J.R.R. Tolkien and C.S. Lewis. The series is based on Joseph Loconte’s New York Times bestseller. Photos from the series here — “Truly amazing!”

We have had an amazing start to this 2nd chapter of our production. We hit the ground running from Panavision, London, thanks to their generous donations.  From there we secured an abandoned boarding school in Hastings to create some amazing reenactments.  With today’s early call in Liverpool, we shall get to work, but enjoy these shots from our reenactments.

The once proud golden pages of F&SF have taken a definite turn for the worse under the Executive Editorship of one Avram Davidson.  At last, after two years, we arrive at a new bottom.  Those of you with months remaining on your subscription can look forward to a guaranteed supply of kindling through the winter.

(9) STAN LEE TRIBUTE. At the Smithsonian movie producer and instructor Michael Uslan eulogizes his hero and mentor, whose superheroes taught him countless life lessons — “A Letter to Stan Lee, Comic Book Legend, Written by One of His Biggest Fans”.

What about what you did for me personally in life? …

(11) THE WINNING CRATER IS… Tech Crunch pays attention as “NASA chooses the landing site for its Mars 2020 rover mission”.

“The landing site in Jezero Crater offers geologically rich terrain, with landforms reaching as far back as 3.6 billion years old, that could potentially answer important questions in planetary evolution and astrobiology,” said Thomas Zurbuchen, associate administrator for NASA’s Science Mission Directorate, in a statement. “Getting samples from this unique area will revolutionize how we think about Mars and its ability to harbor life.”

The crater is located on the western edge of Isidis Planitia, a giant impact basin just north of the Martian equator, with some of the oldest and most scientifically interesting landscapes Mars has to offer, according to NASA scientists.

(12) INVENTIONS OF THE YEAR. Popular Mechanics put together a list of the most impactful inventions; 1 per year (“65 Best Inventions of the Past 65 Years”). “Since the list starts in 1954, PM has declared that Nothing Interesting Happened Here™ in  or before my birth year, should that make me #Sad?” asks Mike Kennedy.

(13) BUGS, MR. RICO! Since “These 4,000-Year-Old Termite Mounds Can Be Seen From Space” you can assume aliens flying wooden spaceships will be landing somewhere else…

Scientists have discovered an immense grouping of freakishly large termite mounds in northeastern Brazil. Obscured by trees, the previously undetected array occupies a space equal to the size of Great Britain.

As described in a new paper published today in Current Biology, the regularly spaced termite mounds date back nearly 4,000 years and cover an astounding 230,000 square kilometers…

(14) IS DNA DESTINY? The Hollywood Reporter rings up another Netflix genre show: “Netflix Orders Sci-Fi Series ‘The One’ from ‘Misfits’ Creator”.

The streaming giant has picked up 10 episodes of the show from Urban Myth Films and StudioCanal. The series is based on a novel by John Marrs.

The series is set “five minutes in the future” in a world where a DNA test can reveal a person’s perfect partner — the one you’re genetically predisposed to fall passionately in love with. But it also raises other questions: Who hasn’t thought about whether there is someone better out there? What if a hair sample is all it takes to find them? The idea is simple, but the implications are explosive.

(15) MAGICIANS SEASON 4. The Magicians returns with all new episodes on January 23 on SYFY.

Based upon Lev Grossman’s best-selling books, The Magicians centers around Brakebills University, a secret institution specializing in magic. There, amidst an unorthodox education of spellcasting, a group of twenty-something friends soon discover that a magical fantasy world they read about as children is all too real— and poses grave danger to humanity.

(16) OMG IT’S THE ENTERPRISE! [Item by Mike Kennedy.] Somewhere out there in space an odd thing is happening. An image of Star Trek’s USS Enterprise, writ much, much larger than the fictional ship, has been found ( NASA: “Abell 1033: To Boldly Go into Colliding Galaxy Clusters”). A composite image using X-ray, low-frequency radio wave, and optical data is a somewhat distorted but nonetheless recognizable depiction of the Enterprise. From the NASA press release:

Galaxy clusters — cosmic structures containing hundreds or even thousands of galaxies — are the largest objects in the Universe held together by gravity. Multi-million-degree gas fills the space in between the individual galaxies. The mass of the hot gas is about six times greater than that of all the galaxies combined. This superheated gas is invisible to optical telescopes, but shines brightly in X-rays, so an X-ray telescope like NASA’s Chandra X-ray Observatory is required to study it.

By combining X-rays with other types of light, such as radio waves, a more complete picture of these important cosmic objects can be obtained. A new composite image of the galaxy cluster Abell 1033, including X-rays from Chandra (purple) and radio emission from the Low-Frequency Array (LOFAR) network in the Netherlands (blue), does just that. Optical emission from the Sloan Digital Sky Survey is also shown. The galaxy cluster is located about 1.6 billion light years from Earth. 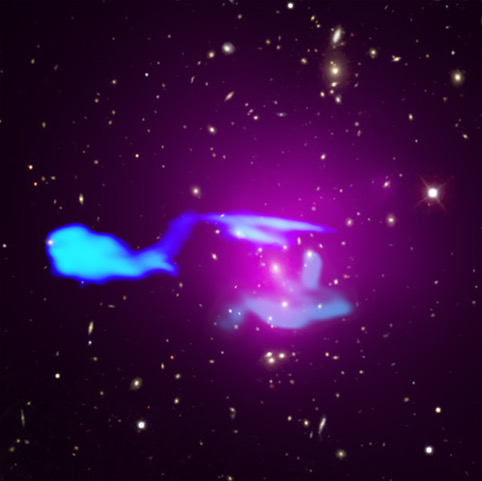 Which, of course, to us Olde Phartz, immediately calls to mind what story?

(18) NO QUESTION ABOUT IT. What subliminal advertising is at work here?

why this bag of cat litter look like the poster for a horror film pic.twitter.com/JLFAcmaXuj