(1) LUKE SKYRANTER. Movie Banter brings you “10 minutes of Mark Hamill being HONEST about The Last Jedi.”

No matter what you think of the film and the way Luke Skywalker was portrayed, thank goodness Mark isn’t afraid to speak his mind. He is sincere and cares about the franchise as much as he cares about the fandom.

(2) THE BREW THAT IS TRUE. Inverse explains that “Ewoks Are Coffee Farmers According to Star Wars Canon”.

The upcoming Han Solo movie will, no doubt, make all sorts of changes to Star Wars canon, but a just-released book about Han and Lando’s adventures quietly revealed that Ewoks are actually renown coffee farmers. Yep, those cute little Imperial-killing teddy bears are responsible for the best cup of java you’ll find outside of Dex’s Diner.

The book, Last Shot: A Han and Lando Novel, came out earlier this week, and it follows the two coolest characters in the galaxy across three distinct time periods. In one of them, set after Return of the Jedi but well before The Force Awakens, baby Ben Solo kicks his dad in the face. Later in that scene, Han’s culinary droid, BX-778, brews up a mean cup of Endorian caf. (Coffee is called “caf” in the book because, well, that’s how Star Wars rolls).

Last year too, the Sturgeon Award Finalists were the most accurate guide to which stories would be broadly recommended (by serious reviewers, major anthologies, and prestigious awards). http://www.rocketstackrank.com/2018/01/2016-best-sff-short-fiction-guides.html

There’s definitely something special about this award. It should get more attention than it does.

(4) THESE POTATOES AIN’T GONNA PLANT THEMSELVES! Or will they? “All by Itself, the Humble Sweet Potato Colonized the World”.

Of all the plants that humanity has turned into crops, none is more puzzling than the sweet potato. Indigenous people of Central and South America grew it on farms for generations, and Europeans discovered it when Christopher Columbus arrived in the Caribbean.

In the 18th century, however, Captain Cook stumbled across sweet potatoes again — over 4,000 miles away, on remote Polynesian islands. European explorers later found them elsewhere in the Pacific, from Hawaii to New Guinea.

The distribution of the plant baffled scientists. How could sweet potatoes arise from a wild ancestor and then wind up scattered across such a wide range? Was it possible that unknown explorers carried it from South America to countless Pacific islands?

An extensive analysis of sweet potato DNA, published on Thursday in Current Biology, comes to a controversial conclusion: Humans had nothing to do with it. The bulky sweet potato spread across the globe long before humans could have played a part — it’s a natural traveler.

“This finding is likely to be controversial because it calls into question the alleged contacts between Polynesians and Americans in pre-European times,” Oxford University botanist Pablo Muñoz-Rodriguez, who led the study, told Ars Technica. “[The] sweet potato was the only remaining biological evidence of these contacts.”

Muñoz-Rodriguez and his team sampled DNA from 119 specimens of sweet potatoes and all of their wild relatives, including a sweet potato harvested in the Society Islands in 1769 by the Cook expedition. With those samples, Muñoz-Rodriguez and his colleagues built a phylogenetic tree: a family tree that shows evolutionary relationships among organisms based on the differences in their DNA. For plants, researchers often build two phylogenetic trees: one for the DNA stores in the nucleus of the plant’s cells and one for the chlorophyll-producing organelles called chloroplasts, which have their own DNA. Genetic material doesn’t always get passed on in the same way for both, so it’s sometimes useful to compare the two.

The team used the phylogenetic trees to estimate how long ago each branch of the tree split off from the others. It turned out that the Society Islands sweet potato hadn’t interbred with Central and South American lines for at least 111,500 years…

(5) TODAY’S JOB LOST TO ROBOTS. WIRED Magazine reports “A Robot Does the Impossible: Assembling an Ikea Chair Without Having a Meltdown”. I’m beginning to suspect Brian Aldiss wrote the wrong ending for “Who Can Replace A Man.”

Researchers report today in Science Robotics that they’ve used entirely off-the-shelf parts—two industrial robot arms with force sensors and a 3-D camera—to piece together one of those Stefan Ikea chairs we all had in college before it collapsed after two months of use. From planning to execution, it only took 20 minutes, compared to the human average of a lifetime of misery. It may all seem trivial, but this is in fact a big deal for robots, which struggle mightily to manipulate objects in a world built for human hands.

(6) ALL IN A DAY. Initially, Patrick Nielsen Hayden made his feelings clear about a new book coming out which has the same title as an Emma Bull novel. (Jump on the thread here.)

Suzanne Palmer is great, but evidently we have completely given up on the notion that maybe we shouldn't appropriate titles that have been used for other substantial works in the genre. Expect new books called DUNE, STRANGER IN A STRANGE LAND, THE DEMOLISHED MAN, and MISTBORN.

Patrick, I wasn't aware of the Bull book until about a month ago, & you've known my title since last summer. I wish if you had concerns that you'd just contacted me? You know me well enough to know I wouldn't intentionally step on anyone's toes. I'm sad this is how this fell out.

(7) DOG DUTY. The New York Times inquires: “Do You Know Which Dog Breeds Are in a Mutt? Scientists Want to Find Out”. 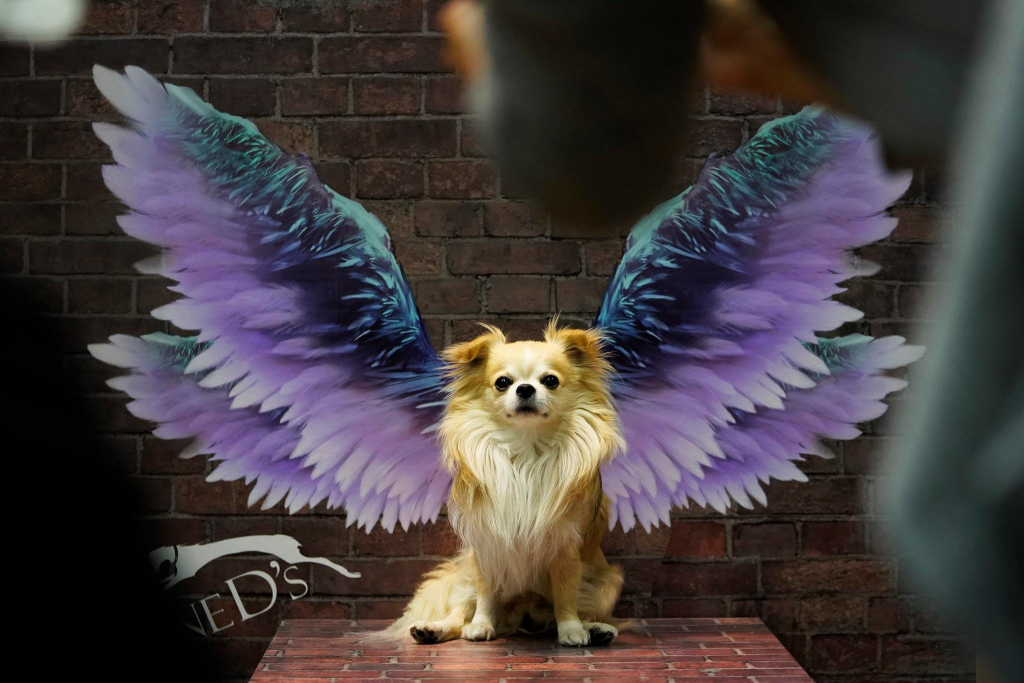 One of the favorite pastimes of dog people is guessing a mutt’s ancestry.

Is that scruffy little guy in the dog park a mix of Afghan hound and Catahoula leopard dog? Is the beast that bit someone really a pit bull, or a cocker spaniel-beagle potpourri? And how about your aunt’s yippy pillow on paws — Maltese/poodle/peke?

If you’re wondering about your own dog you can, of course, get a DNA test. But there’s a lot of open territory for that familiar figure in the canine world, the dog guesser. You know who I mean, they’re like dog whisperers, but louder.

Now all self-proclaimed experts have a chance to prove their mettle or meet their comeuppance. The MuttMix survey debuted on Monday. It is citizen science for people who are willing to be proven terribly wrong, a dog quiz that tests how good you are at figuring out what a mutt is made of.

The survey is being run by the Darwin’s Dogs program at the Broad Institute in Cambridge, Mass., a center for genome studies, and the International Association of Animal Behavior Consultants. Fellow dog guessers (yes, I confess) proceed at the risk of your exceedingly high self-regard….

(8) THE MODERN PROMETHEUS. Mary Shelley biopic opening in theaters May 25.

Starring: Elle Fanning, Maisie Williams, Bel Powley, Douglas Booth, Joanne Froggatt & Stephen Dillane She will forever be remembered as the writer who gave the world Frankenstein. But the real life story of Mary Shelley—and the creation of her immortal monster—is nearly as fantastical as her fiction. Raised by a renowned philosopher father (Stephen Dillane) in 18th-century London, Mary Wollstonecraft Godwin (Elle Fanning) is a teenage dreamer determined to make her mark on the world when she meets the dashing and brilliant poet Percy Shelley (Douglas Booth). So begins a torrid, bohemian love affair marked by both passion and personal tragedy that will transform Mary and fuel the writing of her Gothic masterwork. Imbued with the imaginative spirit of its heroine, Mary Shelley brings to life the world of a trailblazing woman who defied convention and channeled her innermost demons into a legend for the ages.

(9) NEXT ON HIS AGENDER. Jon Del Arroz, worried there might still be a few people he hasn’t alienated this week, announced he is “Coming Out As A Woman” [Internet Archive link] – which is to say, adopting a pseudonym.

After serious deliberations, I will be only submitting short fiction to professional markets from a new female pen name. I’ve come up with the name, I’ve got the email address, it’s ready to go. I will be, for all intents and purposes, a female author. It’s the only way to get ahead in the business, and the smart thing to do. I won’t be broadcasting the name here in case of any inadvertent discrimination, but I will keep you informed as to how reactions change based on having a female name. It’ll be interesting to say the least.

(10) PRELUDE TO SPACE. NPR tells about “Antarctic Veggies: Practice For Growing Plants On Other Planets”.

And while growing greens in Antarctica is exciting — for much of the year there’s no fresh produce at Neumayer Station III — Bamsey says the end goal of this project is much farther away. EDEN ISS is a practice round for cultivating food in space.

A diamond-bearing space rock that exploded in Earth’s atmosphere in 2008 was part of a lost planet from the early Solar System, a study suggests.

The parent “proto-planet” would have existed billions of years ago before breaking up in a collision and was about as large as Mercury or Mars.

A team has published their results in the journal Nature Communications.

They argue that the pressures necessary to produce diamonds of this kind could only occur in planet of this size.

Using three different types of microscopy, the researchers characterised the mineral and chemical make-up of the diamond-bearing rocks. The fragments were scattered across the Nubian desert of northern Sudan after the asteroid 2008 TC3 exploded 37km above the ground on 7 October 2008.

Well you tell by the way I use my spear
I’m a murder bear, I got no fear
Speeder bikes and Empire goons, I’ve been kicked around
My forest moon
And now it’s all right, it’s OK
I’ve got stormtroopers to slay
And way above, I think I spy
A Death Star hangin’ in the sky

Well you might think I’m a teddy bear
My god’s a droid in a wooden chair
I may just have stone age tools
But I’m the end of those Empire fools
And now it’s all right, it’s OK
There’ll be some fireworks this day
And way above, I think I spy
A Death Star fallin’ from the sky