Editor’s Appeal: Is “Pixel Scroll” a good title for these daily posts? If so, I still think there needs to be some adornment and variety to keep it fresh. Can anybody think of a scheme to generate a brand of subtitles? (The “Pixel Scroll” title could be changed to something else to facilitate a winning idea.)

(1) George R.R. Martin is coming to Sasquan after all and has declared he is taking back the Hugo Losers Party from the boring souls who have sanitized it and disguised it as the “Post-Hugo Nominees Reception.” GRRM and Gardner Dozois held the first one in 1976 and it immediately became de rigueur.

Gardner and I ran another one at Suncon in 1977, and yet another at Iguanacon in 1978 (I lost my first novel Hugo that year). I don’t think there was one in 1979, but don’t know for sure… that year worldcon was in England, and I didn’t have the money to go. But the Hugo Losers party came back big in 1980, at Noreascon II. That blurry picture up above? That’s me, entering the Hugo Losers Party with two Hugos in my hands. Such hubris cannot go unpunished. Nor did it. Please note the man lurking behind me. That’s Gardner, smiling innocently. A few moment later, when my back was turned, he produced a can of whipped cream and sprayed it all over my head. Sic Semper Victorius.

(2) Those looking to practice their party skills should show up for Prolog(ue), the relaxacon being held in Seattle the weekend before the Worldcon (August 14-16). Ulrika O’Brien has posted a progress report at the link. The international array of Persons of Interest coming to the con includes TAFF winner Nina Horvath and —

Charles Stross – Hugo- and Locus-Award winning author of the Laundry Files series, the Merchant Princes series, and too many stand-alone novels and short stories to mention, will be reading from his latest Laundry Files book, The Annihilation Score (released July 7) and possibly unreleased upcoming stories. You Heard It Here First.

(3) “Portlander Ursula K. Le Guin is Breathing Fire to Save American Literature” in Portland Monthly begins, “At 85, she may be Portland’s greatest writer. She may also be the fiercest.”

Foremost among her concerns these days, it seems, is what Le Guin considers a worrisome literary shift whereby writers—squeezed to make a living in a world that attaches less and less financial value to their profession—view themselves more as brands and “content producers” than artists. “I see so many writers getting pushed around by the sales department, the PR people, and being led to believe that that’s what they do,” she told me. “That’s a terrible waste.”

Artistic resignation in the name of pragmatism—“letting commodity profiteers sell us like deodorant, and tell us what to publish, what to write,” as she put it in her National Book Awards speech—elicits Le Guin’s especial disapproval precisely because she herself spent an entire career bucking what others thought she should write. Yet even now that her own science fiction has been lofted into the modern literary canon, praised by no less an elitist than Yale’s Harold Bloom, Le Guin remains more interested in keeping the good fight going than in declaring victory. “We’ve come a real long way,” she admitted, “and in fact I think essentially these genre walls are down. But you would not believe how contemptuously reviewers and other people still just dismiss sci-fi. There’s still so much ignorance, and that bugs me.”

(4) GoodReads has blogged their choices for “10 of the Best Narrator and Audiobook Pairings of All Time” which includes numerous SF/F entries: 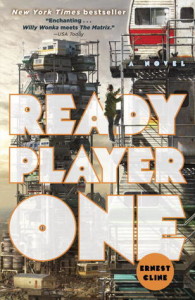 READY PLAYER ONE Written by Ernest Cline Narrated by Wil Wheaton (Star Trek: The Next Generation, Stand by Me)

A SERIES OF UNFORTUNATE EVENTS Written by Lemony Snicket Narrated by Tim Curry (The Rocky Horror Picture Show, It)

(5) Robert J. Sawyer admits he is skeptical about newer writers crowdfunding their novels.

So, I’m still struggling with this. I’ve supported some Kickstarters for projects that clearly are not commercially viable that I’d like to see done. But early books in a writer’s career? Those have rarely been commercially viable for anyone, and have always represented a substantial degree of risk and commitment on the part of the author.

(6) Bradbury, the Building makes for good reading, too, on LA Curbed.

The timeless, fantastic Bradbury Building at Broadway and Third Street is a much-beloved Downtown Los Angeles landmark, most widely known for its significant appearances in movies including Blade Runner, (500) Days of Summer, and Marlowe, starring the late James Garner. But before it was a popular film set, it was the idea of a gold-mining magnate who really wanted to put his name on a building. His vision led him to turn down a prominent architect and mysteriously commission a totally untrained one instead, and that not-quite-architect, George H. Wyman, turned to ghosts and literature to pull it off. Avery Trufelman, producer of the design and architecture podcast 99 Percent Invisible, talked to Esotouric operators Kim Cooper and Richard Schave about the eerie history of what 99 PI calls “arguably the biggest architectural movie star of Los Angeles.”

As the story goes, Lewis Bradbury, a gold-mining millionaire, decided he wanted to build and put his name on a building, so in 1892 he commissioned prominent architect Sumner P. Hunt, who alone and with partners would design the Southwest Museum, the Ebell Club, the Automobile Club in University Park, and loads of private homes for wealthy clients throughout the late Nineteenth and early Twentieth Centuries. Hunt prepared some plans for the proposed building, but when Bradbury visited the office to check them out, he wasn’t taken with any of them. Here’s where things get weird…..

It’s said that Wyman’s inspiration for the building’s design was directly inspired by a novel, Looking Backwards by Edward Bellamy, a popular science fiction novel about a utopian society that was published in 1888. A passage from that book describes this incredible building in the future (which, in those days, was 2000): “a vast hall full of light received not alone from the windows on all sides, but from the dome.

(7) Pluto appears to have glaciers of nitrogen ice, judging by the latest pictures from the New Horizons probe.

….But the mission team cautions that it has received only 4-5% of the data gathered during 14 July’s historic flyby of the dwarf planet, and any interpretations must carry caveats.

In a briefing at the US space agency’s HQ in Washington DC, he and colleagues then outlined a number of new analyses based on the limited data-set in their possession.

These included the observation that Pluto has a much more rarified atmosphere than previously predicted by the models. … 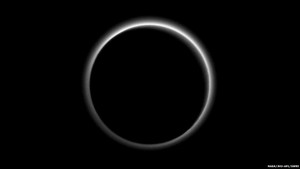 (8) Don’t miss out — here’s info about how to submit yourself for casting calls for the next three Star Wars movies.

The Walt Disney Studios and Lucasfilm in association with Kasdan Pictures and Genre Films will begin production on “Star Wars: Episode VIII” on January 16, 2016. Casting is now officially underway for new lead roles and supporting roles. Filming will take place at the Pinewood Studios in London, England among another undisclosed locations in the United Kingfom. Casting director information is posted below. Experienced film crew members can now submit resumes to the production office email below. All actors, extras, and film crew members must be legally eligible to work in the entertainment industry in the United Kingdom….

(9) Speaking of available work, Vox Day posted a Tor job announcement today – they’re looking for a publicist. See how helpful he is? Not just trying to create openings at Tor, but willing to fill them too!

(10) I enjoyed Spacefaring Kitten’s spin on this nominee –

Just watched a superfun toy commercial which is also a #HugoAwards finalist. http://t.co/tqZz7fL4IA

(11) Sarah Lotz, in a Guardian book blog post titled “The Hugo awards will be losers if politics takes the prize”, has this to say —

It raises the question: who should nominate works for awards anyway? A select jury (a la the Man Booker or Clarke) or the fans who actually buy the books? Clearly there should be enough room – and integrity – for both. Yet this year’s Clarke award shortlist was almost universally praised, while, in contrast, the Hugo nominations were met with derision and incredulity (for example, so-called “rabid puppy” Vox Day, who has called women’s rights “a disease to be eradicated”, is up for two awards). You might say that this is democracy at work – the fans have spoken! – and that would be all well and good, but, tellingly, two authors recommended by the Sad Puppies have already pulled their work from the nominations, saying that they want their writing to be judged on merit and not on their assumed political affiliations. It goes without saying that all books, whatever their authors’ political stance, should be judged on whether they’re any good or not; but with some factions suggesting fans vote “No Award” on categories that they believe have been hijacked, and the Puppies urging their stormtroopers to stick to their guns, the whole thing has slipped into farce. And this is a great pity.

Politics was already taking the prize, but it was left politics so it was okay. http://t.co/g6S2wxby25 #Hugo

A Italian western parody, of Sergio Leone’s THE GOOD, THE BAD and the UGLY…but with Star Wars characters. With respect to Ennio Morricone’s unforgettable and entirely iconic film score.

[Thanks to JJ, Paul Weimer, SF Signal and John King Tarpinian for some of these links.]