(1) LACKEY HOSPITALIZED OVERNIGHT AT GEN CON. Mercedes Lackey thought she was having a stroke, but instead had been poisoned by outgassing from all the materials in the newly renovated room where she stayed at Gen Con. She’s making a full recovery, reports Krypton Radio.

Thursday night we went to bed after a day of con work. I woke up to the alarm at 9 after 9 hours and sleep and felt like I hadn’t had any. I reset the alarm for 10, same. I reset it for 11 and got up, still feeling the same. As I was getting ready, I realized I was getting more and more unsteady, dizzy, disoriented, losing my balance. I began talking to myself and heard myself slurring words. I realized I was in trouble, tried to dial 911, got 977 instead, hit the 0 on the house phone, told them I thought I was having a stroke, and please call emergency services.

By the time they got there I was halucinating. When I opened the door to the paramedics, and the hotel manager, I saw the medics, the manager, and standing between them a beautiful woman with long sandy-brown wavy hair in an astronaut’s orange jumpsuit. I explained what my symptoms were as best I could and THEY were convinced I was having a stroke. Meanwhile, Judy Chambers who had been gofering for me had arrived, with Bill Fawcett. Bill took over in his usual efficient manner (and he is literally my guardian angel in this).

By the time we got to the hospital I could barely talk and was hallucinating like it was Woodstock. Bill and Judy were with me every step of the way, as I got EKG, EEG and MRI. I’ll tell you all about the hallucinations some time, they were doozies. Bill stayed with me until I got a room, and the hallucinations and slurred speech started to clear. That was when he told me about the conversation he and the hotel manager had had about the outgassing. Bill stayed with me until about an hour after I fell asleep.

By this morning I was absolutely my old self. By 10 AM I had convinced the GP, the Neurologists and the Toxicologists that I was good to release, and they turned me loose about noon. Charles Borner, another friend who was in the loop (and scheduled to stay with me when Bill couldn’t) brought be back over to the con, and I managed to do my scheduled signing.

In fact, if the prior age be gilded, then our current era of comics resurgence must be some kind of Silver Age.  Just look at performance of the successor to Atlas Comics, that titan of the industry that had died back in 1957.  Leaping from obscurity just a few short years ago, Marvel Comics has doubled down on its suite of superheroes, launching three new comic books in just the last few months.

The most exciting of them is The X-Men, featuring a team of teenage mutants under the tutelage of Professor Charles Xavier, at once the most powerful telepath in the world, and also the first handicapped superhero (that I know of).

Let’s meet the cast, shall we?  We’ve got Slim Summers (“Cyclops”), who projects ruby blasts from his eyes; Bobby Drake (“Ice Man”), the kid of the group, who creates ice at will; Hank McCoy (“Beast”), possessed of tremendous agility and oversized hands and feet; Warren Worthington III (“Angel”), a winged member of the upper crust (financially and evolutionarily); and Jean Grey (“Marvel Girl”), a telekinetic.  Why Bobby is a Man and the older Jean is a Girl, I haven’t quite figured out.

(3) FANCASTROVERSY. Claire Rousseau spotted a proposal in the Worldcon Business Meeting Agenda to update the Best Fancast Hugo to Best Podcast that she doesn’t like at all. The thread starts here.

(4) THE FUTURE IS NOW. Reuben Jackson comes up with “6 sci-fi prophecies that are already here” at Big Think.

Just imagine contact lenses that are also cameras, giving them the ability to record and store whatever you see so you can play it back whenever you want to – your wedding, the birth of your child, or a particularly happy vacation that you don’t want to forget.

Well, Sony has recently filed a new patent for ‘smart contact lenses’ that actually record your experiences. The technology behind these lenses would be highly sophisticated. They would feature special sensors that would convert mechanical energy into electrical energy to activate the camera. It would even be able to adjust for the tilt of the wearer’s eye and use autofocus to adjust for blurry images. 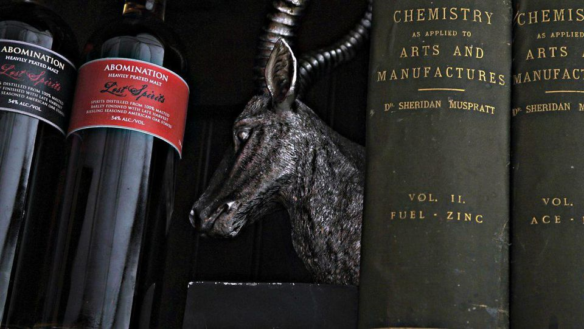 Nestled on Sixth Street in the arts district of Downtown L.A., Lost Spirits Distillery is one of those things you have to be in on to even find it. You don’t need a password or to pass a velvet rope to get in, just a reservation. But you’re not going to casually stroll down Sixth and find Lost Spirits. You have to be in on the secret, which is fitting because once you walk into the lobby you enter another world, one of mystery, science, intrigue and award-winning whiskey and rum.

When you go down the rabbit hole into the Willy Wonka-esque factory for adults, take a trip to the bathroom, even if just to wash your hands. There you will have your first, but not last encounter with TESSA, the computer system that was created by “mad” scientists Bryan Davis and his partners to lead the tour. More HAL from 2001: A Space Odyssey than Siri, TESSA is your surprisingly welcoming guide to Lost Spirits.

Davis, part of the five-person super team that now oversees Lost Spirits, explains to our group during the tour that the bathroom technology was the first use of TESSA. “As soon as we finished the automation software, we looked at each other and were like, ‘Dude, let’s go automate the bathroom,’” he says laughing.

… “They speak to today’s generation of drinkers by combining booze, artificial intelligence, Disneyland and gastronomy to make the best distillery tour ever,” says Joey Chavez, one of the riders on the tour that day.

Three very different people escape the American Civil war by stealing a balloon – which crashes near a deserted island. But perhaps it is not quite as deserted as they think it is…

Dan Dare, The Voyage to Venus Episode 1 of 2

The Voyage to Venus

Dashing test pilot, Dan Dare, is selected to fly the Anastasia – a new experimental spacecraft using alien technology – on its maiden voyage to Venus. The mission is to make first contact with the mysterious civilisation that sent the technological secrets to Earth…

“My goal is that there should be a Star Trek something on all the time on All Access,” CBS TV Studios president David Stapf said Sunday during a Deadline interview about the CBS streaming service that included the platform’s president and COO Marc DeBevoise and EVP Original Content Julie McNamara.

No, they don’t seem to mean a 24/7/365 Trek channel, but apparently want to have at least one series in the Trek universe(s) on CBS All Access at all times. That would include the recently announced Patrick Stewart Star Trek series but also other Trek spinoffs in development (both “limited series” and “ongoing series.”  They also gave updates on other genre series, including The Twilight Zone reboot and a series adaptation of Stephen King’s The Stand.

(11) CHANNEL YOUR INNER ELF. Now that you know they exist, can you live without them? “Urbun Elf Earbuds Headphones”: 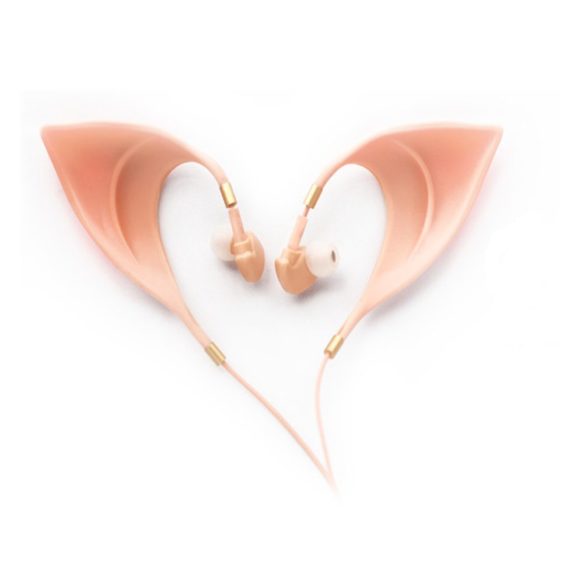 (12) BEAR WITNESS. Emily Asher-Perrin tells why “I Have A Lot of Feelings About Christopher Robin” at Tor.com.

With the success of the Paddington films, it seems as though certain parts of Hollywood have recognized that we could all do with more films that are the equivalent of hugs and hot chocolate and warm blankets. And since Disney has their own lovable bear to trot out, it was only a matter of time before we could expect a (slightly) more realistic look at the Hundred Acre Wood and all its inhabitants. Christopher Robin aims to tug at the heartstrings, but gently, and with all the simple wisdoms that A.A. Milne’s books have imparted on generations of readers. It succeeds at this feat particularly well.

Despite some of the action-oriented trailers, anyone expecting Christopher Robin to be a new generation’s Hook will probably walk out confused. Maintaining the tone of Milne’s work was clearly foremost of the minds of the creative team, and Winnie the Pooh and pals are reliable as they ever were. Christopher Robin, though he is struggling with the demands of being an adult, never becomes callous or distant.

(13) WHY PROGRAMMING NEEDS TO BE COOL. Cora Buhlert has made lemonade from some recent fannish news: “Convention Programming in the Age of Necromancy – A Short Story”.

Convention Programming in the Age of Necromancy

At the daily program operations meeting of a science fiction convention that shall remain unnamed, the debate got rather heated.

“We absolutely need to hold the ‘Future of Military Science Fiction’ panel in Auditorium 3,” the head of programming, whom we’ll call Matt, said.

“And why?” his fellow volunteer, who shall henceforth be known as Lucy, asked, “Is military SF so important, that it needs one of the bigger rooms, while we shove the ‘Own Voices’ panel into a tiny cupboard?”

“No,” Matt said, “But Auditorium 3 has air conditioning.”

Lucy tapped her foot. “And? Are old white dude military SF fans more deserving of coolness and air than own voices creators and fans?”

Matt sighed. “No, but Heinlein’s reanimated corpse is coming to the panel. And trust me, he smells abominably. Oh yes, and he’s declared that he wants to attend the ‘Alternative Sexualities in Science Fiction’ panel, so we’d better put that in a room with AC, too.” …

Just an FYI: since the revised Worldcon schedule is apparently no longer a burning oil slick of WTFery, I've agreed again to do my Worldbuilding workshop there. https://t.co/uAAv4Hf0wG #worldcon76

(15) CHICAGO IN 2022 WORLDCON BID. Their social media is getting more active. The ChicagoWorldcon Facebook page is calling for “likes.” So if you do…!

(16) VIDEO OF THE DAY. In “This Actor’s Cartoon Game Is Strong” on Vimeo, Great Big Story profiles voice actor Tara Strong, best known for her work on “Rugrats,” “Fairly Odd Parents,” and as Rocky in the new version of “Rocky and Bullwinkle.:”