The editor fails to hide how ornery all this Puppy news makes him, in today’s Scroll.

(1) D23 is this weekend and attendees received this Drew Struzan poster for Star Wars: The Force Awakens. It’s a souvenir edition — Struzan will create another primary poster for the film. 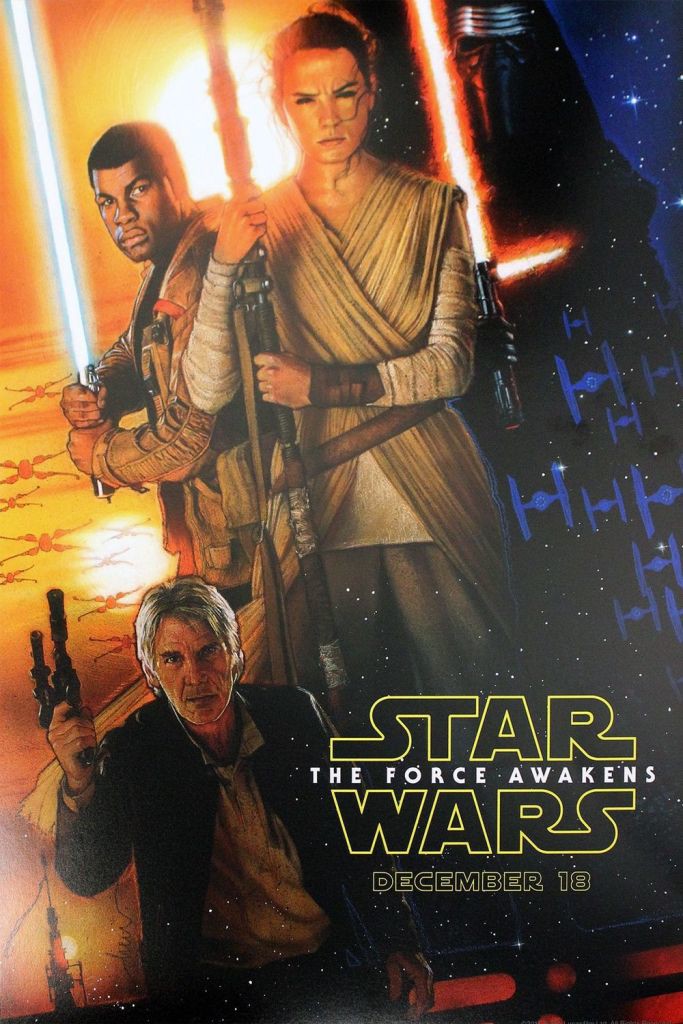 (2) Just in time for WorldCon, “Tragedy of the Goats”, Francis Hamit’s epic story about, sex, security,and science fiction Fandom. Download it to your Kindle today and read it on the plane. (No puppies were harmed in this production.) 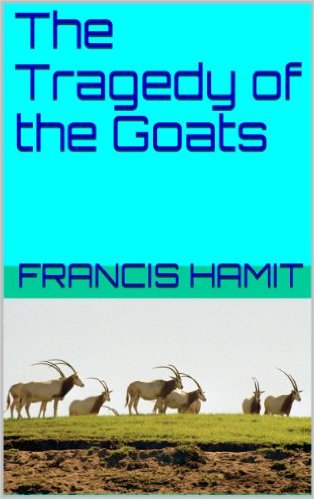 Tom Whitmore, head of publicity, spoke to me over Skype and explained the twist in this year’s awards. Normally their 10,000 members nominate freely, but this year two writers groups formed a coalition to lobby for certain scifi works.

Whitmore: “And they were very successful in getting the nominations out there. This was not against any of the rules, it’s just not what’s been done in the past, it was against social norms.”

And, he says, it has upset a lot of other members. Critics say these writer groups want to make the nominees more homogenous like the genre used to be, ie: winners would be less diverse.

That doesn’t sit well with one very-well known, award winning female writer. Vonda McIntyre will be a guest author at the convention.

McIntyre: “The most amazing writer going when I first started was Samuel R. Delaney…”

(4) If Tom Knighton hadn’t titled his post “Why I no longer care” it would be easier to focus on his actual point:

The truth is that those books I’m told I should challenge myself over are books I don’t want to read.  I don’t care how it handles homosexuality.  I care whether it tells a good story and whether I’ll like the protagonists.  Now, if those protagonists are homophobic, I’m 99 percent sure I won’t like them.  I don’t need to be told that the protagonists are gay, straight, trans, or whatever.  That’s not pertinent to my interests.  Whether the story is fun, is.

Somewhere along the line, folks got hung up on sex and sexuality.  It’s pretty annoying.

However, it’s become clear that for some people, a book’s “message” is vital.  Even books from bygone eras aren’t safe from being dissected for their social message rather than their story.

I’ve been one of those trying to argue that message fiction was a bad idea.  I still think it is.  But now, I just don’t care what those folks do.

(5) George R.R. Martin pre-interprets how any of several possible Campbell Awards winners will be an early sign of how the wind is blowing on Hugo night.

If Wesley Chu takes the Campbell, as he should, I think we will be in for a fairly reasonable night in Spokane. There will be some winners from the slates, and some categories will go the No Award, but most of the rockets will actually go to deserving work. If Chu wins, I think the vast majority of the fans in the auditorium will be more happy than not by night’s end.

If No Award wins, however… if No Award takes the Campbell, it will represent a huge and ominous victory for the “nuclear option,” for the faction of fandom that wants to destroy the village in order to save it. A victory by No Award in this category will signify that the voters decided to throw the baby out with the bathwater, and will likely betoken a long ugly night ahead, with category after category going to No Award. Myself, I think this unlikely. I think the hardcore “vote No Award on everything” voters are a small (if noisy) minority. But I could be wrong. It could happen.

And what if one of the four Puppy finalists takes the tiara?

That would represent a victory for the Puppies, certainly. But even there, certain distinctions should be made. Rolf Nelson was a candidate of the Rabids, but not the Sads. A victory by Nelson would be a singular triumph for Teddy Beale and the most extreme elements of Puppydom… and could suggest even worse results ahead, up to and including VD actually winning one or both of the Editing Hugos for which he is nominated.

Kary English, on the other hand, represents a much more moderate side of Puppydom. Though initially put forward by both the Sad and Rabid slates, VD later dropped her and removed her from his suggested ballot entirely when English put up a couple of blog posts that distanced herself from the Puppy party line.

In other words, Torgerson seems to think there are merely a handful of science fiction and fantasy stories worth anyone’s time: the ones that are just plain fun. People don’t want uncomfortable ideas or unorthodox characters; they just want “a rip-roaring good story” full of “broad-chested heroes” with “pioneering derring-do” who, of course, “run off with beautiful women.” Anything else is false advertising, tricking the unsuspecting reader into a story with complicated messages and cultural commentary, when all they wanted was escapist adventure. Torgerson’s version of “old school” speculative fiction seems to be primarily for and about men. Get out of our treehouse, girls! We’re playing space pirates. Didn’t you see the sign?

Not only does this view denigrate women, it denigrates fans of speculative fiction. In fact, it disrespects the entire genre by negating the value of any story element that doesn’t contribute to the reader’s entertainment high. As the Canadian journalist Jeet Heer points out, “the faux-populism of the Puppy brigade is actually insulting to the right, since it assumes that conservatives can’t be interested in high culture.” The Puppy movement is anti-intellectual at its core, and thus anathema to the genre it seeks to redefine.

(7) Jugger Grimrod (would I kid you?) says the butcher’s bill at the Hugos won’t be as bad as you’ve heard, on Silence Is A Weapon.

Everyone says the Hugos will survive, and I tend to agree. I think the Puppy voters will get tired of throwing away their money in the name of making whatever statement they’re trying to make. They will also have a harder time maintaining the charade that their campaign is about anything other than self-promotion, because after this year there will be fewer neutral parties willing to appear on any slate. The nomination rules will probably be changed to make slates less effective, although I’m afraid that will make the whole process more confusing and could scare some potential nominators away. In the long run this will mostly be forgotten, but in the short term it probably means that at least two WorldCons are going to have their Hugos basically invalidated, and I don’t like that they have to make that sacrifice. In my opinion the harassment policy should be invoked against the Puppy organizers and they should be banned from the convention and disqualified from the awards on that basis. I get that the Hugo organizers won’t do this, they would argue that the integrity of the awards depends on strict adherence to the bylaws, not arbitrary decisions by administrators. I could make some counter arguments but I don’t want to go down that road right now. I will just say that when a group has a stated goal of disrupting the awards, it wouldn’t bother me at all if they were barred from participating.

(8) Brianne Reeves breaks down the Antonelli story from a politicial perspective in “Let’s Talk about the Hugo Awards (Now with more libertarianism!)”.

Most recently, a false police report was filed by a Hugo nominee against another, leading to a full WorldCon investigation and the nominee’s work being rejected from a magazine. In the fall out, death threats and harassment ensued. We’ll be talking a little bit about this. For the full background on the story, you can see some of the posts I’ll link below.

While the “victim” of the false police report has accepted Lou Antonelli’s apologies, the actions of Antonelli haven’t ceased to have consequences. Antonelli’s actions in particular aren’t really what I want to talk about. I’m going to be addressing the actions we have seen in our community more broadly. It feels a bit ridiculous that I should even have to do this; these behaviors are far from common. Unfortunately, they’ve insinuated themselves into our world.

I’m approaching much of this from a more libertarian perspective. This is for a few reasons (1) I think that a libertarian discourse about rights and the role of the state is fitting for the behaviors we have seen in this community; and (2) I think that a discourse about positive and negative rights is a broadly applicable approach for the rhetoric that accompanies the behaviors we have seen recently.

I believe Lou Antonelli acted on impulse, not in furtherance of either well- or poorly-considered libertarian principles, though Reeves’ post was interesting to me just the same.

Who knows within what hidden garret
Vox Day scribes his sexist rant,
or why Correia tries to parrot
his vicious views with careless cant,
or Torgerson begins to prate
of how their work has been ignored
providing cover for their slate
behind his merited award;
they’re powered by their privileged fear.
Oh, where are the pros of yesteryear?

(10) I often search Twitter for File 770 references but rarely for Glyer. It seems I have missed a few gems as a result.

Oh Glyer. So, facts here: a number of people did, in fact, accept my apologies (tendered individually in some cases). pic.twitter.com/k5TUFy1pA3

The fact Mike Glyer lets a frothing racist harasser run around his his comment sections pretty much tells you all you need to know tbh.

[Thanks to redheadedfemme and John King Tarpinian for some of these stories. Title credit goes to File 770 contributing editor of the day Cubist .]