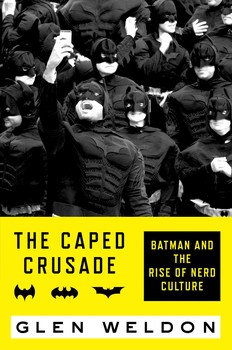 The music of Junker XL throbs through your brain like a migraine, and you hope that for the Justice League movie, Zack Snyder would choose someone more soothing—Junker L, perhaps.

Your brain is filled with questions. For example:  Bruce Wayne can have stubble, because, well, he’s a billionaire, and he can dress any way he wants.  But why can’t Alfred look professional?  Did Zack Snyder go to Jesse Eisenberg and say, “I loved your work as Mark Zuckerberg in The Social Network.  Now give us the insane version.”

You sit through the credits and there’s a special set of acknowledgments—Mort Weisinger. Gardner Fox.  Len Wein.  You ask:  Who are these guys?[1]

In The Caped Crusade, Glen Weldon will tell you.

Weldon, who writes and comments about comics a lot and who has previously written a book about Superman, has written an entertaining and very readable history of Batman. If you want to know more about Batman’s history, this is a good book.

It should be noted that Weldon is gay, and loves to speculate about the decades when Batman was gay and the decades when he was really gay.  He also very much enjoys a typo in  the 1940 comic that introduced Robin that gays will find hilarious but which I won’t repeat because, well, it’s his joke.

But Weldon’s assignment is to tell Batman’s history, and this he does very well. He explains that Batman is a “nonpowered super hero,” the one comic book character people can daydream about being.  He also shows that the creation of Batman was a collective effort.

Bob Kane argued that he created Batman by himself, but Weldon shows that many comic book writers and artists added their part.  Bill Finger was the most important collaborator, designing Batman’s uniform (dark, to make him a creature of the night), and, most importantly, writing the issue of Detective Comics which shows the murder of Thomas and Martha Wayne and young Bruce Wayne’s vow to spend his life “warring on all criminals.”  Gardner Fox (who also wrote a lot of heroic fantasy) created much of the Gothic background of Gotham City.  While Bob Kane thought up the idea of a boy sidekick for Batman, it was Jerry Robinson who named him Robin the Boy Wonder, because as a child Robinson loved N.C. Wyeth’s illustrations for Robin Hood.  Finally, National Comics editor Whit Ellsworth decreed that Batman would never use a gun.

But despite this collective effort, Bob Kane’s supremacy still lingers: while Superman is officially credited to “Jerry Siegel and Joe Shuster,” the Batman credit, for what I am told are complicated legal reasons, is “Bob Kane with Bill Finger.”

Weldon carefully shows Batman’s continuing evolution. Batman is the one DC superhero besides Superman to be drawn continuously for 75 years.  Most DC superheroes were suspended in between the late 1940s and 1956 in favor of sf adventure stories.  Batman in the 1950s fought robots and aliens, accompanied by Ace the Bat-Hound and Mogo the Bat-Ape.  Most of these sf elements were discarded by 1960.

In the comic books, Weldon shows Batman’s evolution. In the 1970s, the books produced by Neal Adams and Denny O’Neil reintroduced the darkness of the classic Batman.  Many comic book fans consider the Adams/O’Neil period the best Batman series.  In the 1980s and 1990s Frank Miller made Batman nasty.  Finally, between 2006-09, Grant Morrison had a “massive, slowly unfolding, meta-mega narrative” in which all of Batman’s adventures, including his ones where his battles with the Bat-Mite and the ones where he teleported to distant planets, were all true.

Weldon spends about half of his book discussing Batman on television and the movies. He credits four actors with excellent work in Batman films and TV shows.

The 1960s Batman TV series, he thinks, works primarily because of the voice work of Adam West.  Go to YouTube and look at Adam West and Lyle Waggoner’s screen tests and you’ll see that West has the rare skill of being authoritative and goofy simultaneously.  That’s a very rare skill—Leslie Nielsen and Patrick Warburton can do it, and I can’t think of anyone else.  But West’s excellent voice skill is the reason why, in his eighties, Seth Macfarlane gives West plenty of work on Family Guy.

In Weldon’s view, the 1990’s cartoon show Batman: The Animated Series is the best version of Batman ever.  The reason, he believes, is the voice work of Kevin Conroy as Batman and Mark Hamill as the Joker.

Finally, Weldon says that Heath Ledger’s performance as the Joker in The Dark Knight was a “unique and unforgettable cinematic creation” thanks to “Ledger’s tiny , highly specific choices.”  Most of the time the Joker is the ultimate extrovert, who proves the timeless rule that clowns are always laughing on the outside and crying on the inside.  Ledger makes the Joker as an introvert, and subtly conveys that everything the Joker says is a lie.  Weldon thinks Ledger’s Oscar was well deserved.

The subtitle of The Caped Crusade is “Batman and the Rise of Nerd Culture,” and Weldon discusses fandom at length.  In the 1960s the producers of the Batman TV series courted the editors of comics fanzines, telling them that many of the scripts for early episodes (but not later ones) came from the comic books.  Fannish pummeling of Joel Schumacher’s egregious Batman and Robin (1997) made Harry Knowles of Ain’t It Cool News one of the web’s first superstars.  Weldon’s discussion of this period reminds me of a joke I once heard—that the most terrifying words in the English language were “a film by Joel Schumacher.”  Today, fans interact with Batman in all sorts of ways, including cosplay and fan fiction.

The Caped Crusade is a well-written, highly entertaining look at Batman which I very much enjoyed reading.

[1] Mort Weisinger, who sold sf fiction in the 1930s and was editor of Thrilling Wonder Stories between 1936-41, was editor of the Batman comics in the 1940s and 1950s.  Len Wein wrote Batman between 1979-86, when he introduced Lucius Fox (played by Morgan Freeman in the Christopher Nolan Batman films) as Batman’s first black character.

9 thoughts on “Review of Glen Weldon’s “The Caped Crusade””