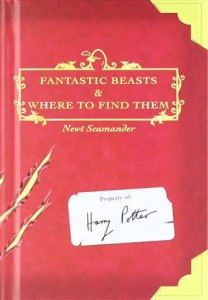 It would be a sin to leave money on the table and that’s one sin Warner Bros. will never be accused of when it comes to exploiting the Harry Potter franchise. So the studio has set J.K. Rowling to work writing the screenplay for a new series of movies based on Fantastic Beasts and Where to Find Them, a fictitious textbook used at Hogwart’s.

The story will be set in New York 70 years before the beginning of the Harry Potter series, and focus on Newt Scamander, the textbook’s author. It is not a prequel, says Rowling, “but an extension of the wizarding world.”

Rowling said the idea for a “Fantastic Beasts” film had come from Warner Bros., and she soon realized she could not entrust another writer with her creation.

“Having lived for so long in my fictional universe, I feel very protective of it,” she said. “I already knew a lot about Newt.”

“As I considered Warner’s proposal, an idea took shape that I couldn’t dislodge. That is how I ended up pitching my own idea for a film to Warner Bros.”