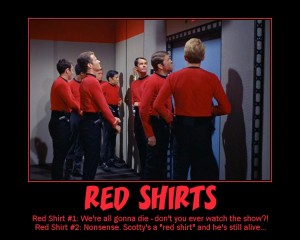 Redshirts. Classic Star Trek fans know them as the expendable security personnel on the away team who are prone to be dramatically killed by hazard of the week — whatever threat the show’s real stars will have to overcome before the end of the episode.

Captain Kirk lost so many redshirts I wondered if he was due for a breakdown. In Captain Newman, M.D., the movie about an Army psychiatric ward during WWII, Eddie Albert’s Colonel Bliss is so racked by guilt about the men he’s sent to their deaths that he suffers a divided personality and, as “Mister Future,” spends his day calling out duty rosters composed of the names of dead pilots [YouTube, at 5:00 and 9:00].

Never Captain Kirk: he simply isn’t that introspective. The only personality splits he experiences are byproducts of transporter accidents – like Evil Kirk and Feeble Kirk from “The Enemy Within,” or Kirk’s alternate universe, war criminal twin (commander of the goateed Spock) in the far more interesting “Mirror, Mirror.”

Who, then, will rescue these minor characters from their gruesome fates? Who will recognize that decades of watching Trek reruns has prepared the audience to become customers for a story told from the redshirts’ point-of-view?

John Scalzi is the man. His satirical adventure, Redshirts: A Novel with Three Codas, revolves around three questions: Can a red-shirted character stay alive for an entire novel? How does this imaginary universe work really? Will his protagonist be able to decipher the rules, survive and save his friends? Scalzi answers all three questions in ways that are entertaining, funny and even, at times, touching.

A Roddenberry counterpart has created the Universal Union (a couple continuums over from the United Federation of Planets, no doubt.) And somebody must answer for all the redshirts who’ve met a gristly end at enemy hands (tentacles, claws, extendable tool arms, acid-spewing beaks, what have you) on his show — a show which somehow truly exists in a parallel space-time to his own. A member of the Intrepid’s latest draft of redshirts, Ensign Andrew Dahl, discovers the truth, and that they have little time to save their lives before they’re doomed to join the away team.

At this point in an ordinary review a critic usually riffs through the plot to help you decide if this is your kind of story. Unfortunately, admiring the work in too much detail would spoil your enjoyment. Anyway, I can’t make my enthusiasm for Redshirts contagious by an inferior retelling of its jokes.

The novel’s opening chapter is a taut, dramatic demonstration of what it’s like to be a redshirt spending his last moments alive trapped in a series episode. It’s my favorite part, and closes with a revealing conversation between Captain Abernathy and his bridge officers, who aren’t as bothered as they might be about the incredible attrition of away team members. Science Officer Q’eeng ends chapter on the exactly wrong emotional note (a good thing in comedy) when he baldy advises his colleagues, “We need more crew.”

What follows is the full adventure of the redshirts’ discoveries and salvation. Then the three codas of the title, First Person, Second Person, and Third Person, fill out the last quarter of the book.

First Person is done as a blog. I don’t know why this practically gave me a split personality of my own.

Mike: I know the novel’s blog is not supposed to be in Scalzi’s “voice.” I know it’s supposed to use the diction of the character creating it.

Glyer: So what’s the problem?

Mike: I feel like the first Redshirts coda keeps falling behind in a competition with something I’m expecting from reading Whatever.

Glyer: This blog is written by one of the characters. If it was just like Whatever it would be a failure.

Mike: We both understand that. Why doesn’t it help?

So the first coda drove me a little batty. If you’re scoring at home don’t mark that down as a flaw in the book but regular readers of Whatever might want to come prepared just the same.

The final two codas are narratives continuing the story in a direction I was more than pleased to see based on the emotional investment I’d made in the characters. Was it a realistic direction? Not necessarily. Sure, we could always have more realism. But bleep that! Manipulate away! (Would you have been happier if E.T. had died in the emergency room? Then Redshirts might not be for you. Otherwise, dive in.)

Redshirts is more than a novel, it’s a royal progress, regaled in song, blog and press release, feted and cheered. Before I ever downloaded a copy I read the blurbs. I applauded the favorable reviews and booed the bad ones. I even gave a signal boost to the book tour. Scalzi’s invitation to watch him pull the levers and push the buttons to promote his New York Times bestseller succeeded, so far as I was concerned, in tapping that same well of vicarious pleasure Bradbury plumbed when he told audiences, “I wanted to be the greatest writer in the world. Aren’t you glad I finally made it?” Buying a copy was the inevitable final step toward my complete immersion in this social media tsunami.

Not that the joyous hype was my sole reason for buying. Scalzi is a funny writer. His blog is funny. I expected his book to fulfill its promise to be funny, too. He did that, and more.

It’s a time-honored competition among sf writers to turn one another’s stories inside out for a laugh, as Harry Harrison’s Bill, The Galactic Hero did to the Foundation Trilogy and Starship Troopers, or Philip Jose Farmer’s Kilgore Trout novel did to Vonnegut. In this case, you’ll enjoy Scalzi twisting and reweaving Gene Roddenberry’s familiar tropes in new and humorous ways.