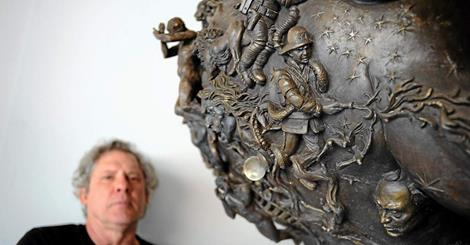 Christopher Slatoff with “The Illustrated Man.” Photo by Andy Holzman.

Sculptor Christopher Slatoff’s 8-foot-tall bronze “The Illustrated Man” will be unveiled at the USC Fisher Museum of Art during the California Art Club’s 104th Annual Juried Gold Medal Exhibition from March 29 to April 19.

“The Illustrated Man” is a “heroic scale” version of “Fr. Electrico”, a three-foot-tall composition awarded a gold medal at the California Art Club’s 97th Annual Gold Medal Juried Exhibition. Both are inspired by Ray Bradbury.

The work is drawn from Bradbury’s real-life experience of being carried home by his father. He was 13 at the time and had fallen asleep after enjoying two circuses. His father lovingly scooped up the teen and toted him more than a mile home.

Slatoff based his piece on the child’s point of view at a time when his father seemed larger than life. His creation depicts a tall, strong man cradling his sleeping son, but its story doesn’t end there.

“The back of the sculpture, for me, the metaphor for Ray Bradbury’s never-ending creativity was the ideas he put forth in his second book, which was called ‘The Illustrated Man.’ Here, a heavily tattooed man’s tattoos come to life and tell their stories,” Slatoff said. “But contrary to what it sounds like, (the vignettes on the statue) are not illustrations of his book, they’re concrete representations of our conversations.”

Slatoff did not read his first Bradbury story until 2007. They met at a Bradbury lecture and became friends. During one of their conversations Bradbury told the anecdote that inspired the design of the sculpture.

“He told me the story because he saw the ‘Pieta’ (at Mission San Diego) that I had sculpted and it reminded him of that. After we were doing the sculpture, he wrote the story ‘Pieta Summer.’ (Bradbury would say) ‘Tell that sculptor to come over, bring a bottle of wine and two kinds of cheese.’?”