One of the drawing cards for Houston’s Space City Comic Con, held this weekend, was the Sons of Anarchy cast reunion.

Charlie Hunnam, star of the biker drama aired for seven seasons on FX, was advertised as appearing the entire weekend. But he left after Friday, with social media passing rumors that he and other actors had not been paid. The response on Facebook was heated.

“Those of you jealous over those of us who got VIPs for the Space City Comic Con – don’t feel bad. Our passes were worthless. Seriously. Actors checked bounced, many are leaving tonight. ”

“Glad Im not the only one who got screwed over today, thnx Space City Comic Con, Ill be waiting for my refund.”

“the celebs are very upset and leaving tonight. “

Steverson went into strict no comment mode when asked about reports of bounced checks including one to Sons of Anarchy’s Charlie Hunnam who was reported to have been at the event Saturday morning but left. Steverson also said no comment when asked if any VIP ticket purchasers had requested their money back. There were reports Saturday that not all pre-paid celebrity autographs were being honored.

Other Sons of Anarchy actors — Ron Perlman, Chris Reed, Timothy Murphy and Kenny Johnson – fulfilled their panel assignments on Saturday. Danny Trejo was there, too. For those signing on Saturday, however, the arrangements were different, reports My Own Little Shadow:

They say that they will not accept the pre-purchase tickets for autographs or photo ops. They are now running a cash-only business.

The convention staff did its best to avoid controversy the rest of the weekend.

Space City Comic Con is doing everything they can to try and make people forget about this massive Charlie Hunnam disaster. #SCCC #SOA

In contrast, fans who went to SCCC mainly to see Star Trek legend William Shatner, or Doctor Who actresses Alex Kingston and Billie Piper, went away happy. The payment arrangement for autographs was cleared up, as the Houston Press reported: “Sunday, a representative for Alex Kingston confirmed that con officials told them to stop taking autograph vouchers, then told them to start taking them again.” 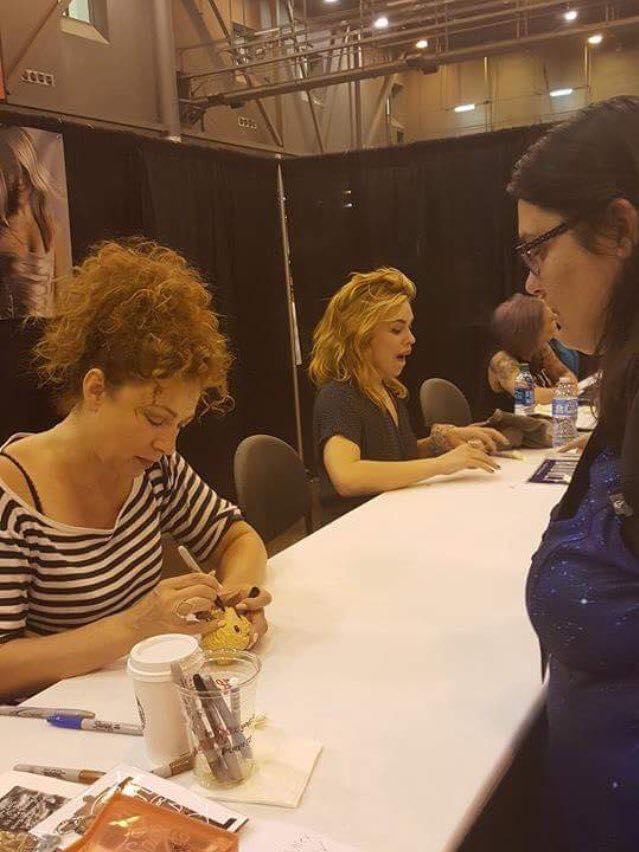 Alex Kingston and Billie Piper at SCCC. Via Riversongbadass-Whovian-Overload Tumblr.

The SoA reunion was not the only drama played out at SCCC.

Bleeding Cool learned that a notorious art pirate had his wares for sale at SCCC via a proxy, and gave its story this convoluted headline — “Filter Swiper Joseph Bayer, Banned From MomoCon, But At Space City Comic Con Via Cosplayer Spock Vegas”.

Virginia-based Joseph Bayer is one of those folk who takes artwork from others, puts a filter on it and sells them as original prints. You can read Bleeding Cool’s expose on him last month here.

He was recently identified and called out on Imgur after an appearance at an east coast comic con which got quite a lot of attention….

This weekend, Johnny Segura discovered that the cosplayer Spock Vegas (prints seen in the photo above by Jason Scholte.) had set up at Space City Comic Con in Houston this weekend, selling these prints. Spock Vegas is a guest at the show. He also has a reputation for charging for any photos taken of him.

Spock Vegas told Segura that he gets them from a friend in Virginia (which is how he figured out it was Bayer) and that they split the profits.

6 thoughts on “Space City Comic Con Disappoints Some, Wows Others”