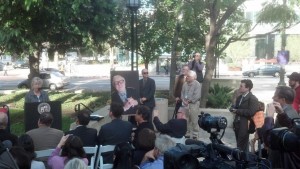 By John King Tarpinian: Today, December 6th, the City of Los Angeles dedicated the intersection of 5th & Flower as Ray Bradbury Square. The area is just behind the main branch library, where Ray spent many hours in his teens all the way thru adulthood and beyond.

This event was spearheaded by Steven Paul Levia, who was responsible for Ray Bradbury Week for Ray’s 90th birthday. City Councilman Jose Huizar, representing the area of the dedication, also grew up in Boyle Heights where Ray and his family briefly lived in the early 1930s. That is where Ray was inspired to write The Wonderful Ice Cream Suit, and where it was filmed. The other City Councilman present was Paul Koretz, who represents where Ray lived and also went to school with Ray’s daughters. Another city representative was John Szabo, who is the head librarian.

Sci-fi writer/futurist David Brin spoke about the time he took his children to meet Ray and he briefly gained respect beyond that of a mortal parent. Sam Weller, a Bradbury biographer, gave a lovely speech and ended by vocalizing as Ray: “You are wondering why I called you here today…”

Ray’s eldest daughter and bookseller Susan Bradbury Nixon said a few words about her dad, which brought out more than a few hankies.

Last up was Joe Mantegna who first worked for Ray in 1972 in a Chicago production of The Wonderful Ice Cream Suit and went on to play the same role in the Disney movie. He told of his last meeting with Ray at the house, which choked him up a wee bit.

As much as I hate driving downtown, I now have a place to stop and sit in a shaded park while I read a few passages from one of Ray’s stories and to remember the joy he has brought so many of us with his stories. 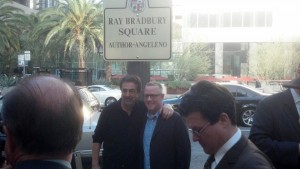 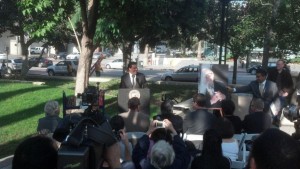 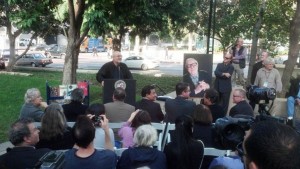 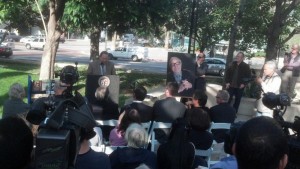 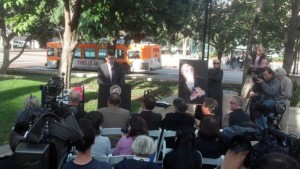 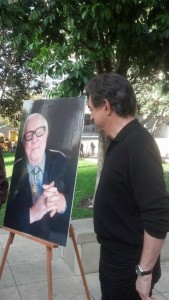 2 thoughts on “Tarpinian: A Wonderful Day
in the Neighborhood”