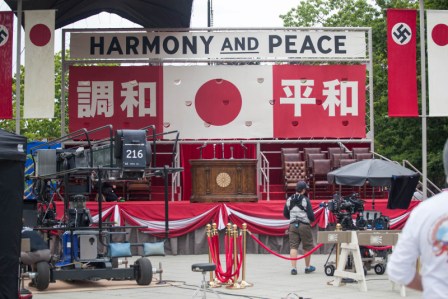 Amazon Studios has commenced filming The Man in The High Castle at the University of British Columbia and various locations in the state of Washington.

You might be wondering why a rather large podium surrounded by Nazi and Japanese flags is set up by the rose garden. You can relax, it’s just a TV show.

Amazon Studio’s The Man in The High Castle, based on the Philip K. Dick novel of the same name, has recently been picked up for a full season, and it’s filming at UBC (as well as Seattle, Monroe and Roslyn, Washington, but who cares?). They’re doing their best to cover up the swastikas with paper, garbage bags, and what looks like painter’s tape, and have put up a sign explaining that fact, but if you walk by at the right time, you’ll be able to see the full set in all its fascist glory.

I was very impressed with the pilot.

The Folio Society is taking advantage of the book’s heightened profile to issue an illustrated edition of the novel with an introduction by Ursula K. Le Guin.

In 1962 Philip K. Dick conjured a new vision of our world – a twisted simulacrum in which the Axis Powers have won the Second World War. America is now divided: the eastern United States is the puppet of a maniacal German Reich, while the western Pacific seaboard is governed by a militaristic, yet spiritual, Japanese dictatorship. Amongst the complexities of this new existence, a group of unremarkable people – an American- Jewish craftsman, a judo instructor, a Japanese diplomat – play out their everyday lives, each striving to uncover a remnant of goodness in the shadow of a gathering evil. As their narratives intersect, Dick poses larger metaphysical questions concerning the authentication of history, perception and the building blocks of destiny….

As Ursula K. Le Guin discusses in her new introduction, the text’s innovation and skill took some of the first steps in dismantling the traditional barriers between science and mainstream fiction: it would become ‘the first big, lasting contribution science fiction made to American literature’. This edition features the work of Shanghai-born Shan Jiang, lead illustrator at design company Shotopop. His graphic images, strongly influenced by Japanese manga and comic book art, channel the text’s melding of cultures. 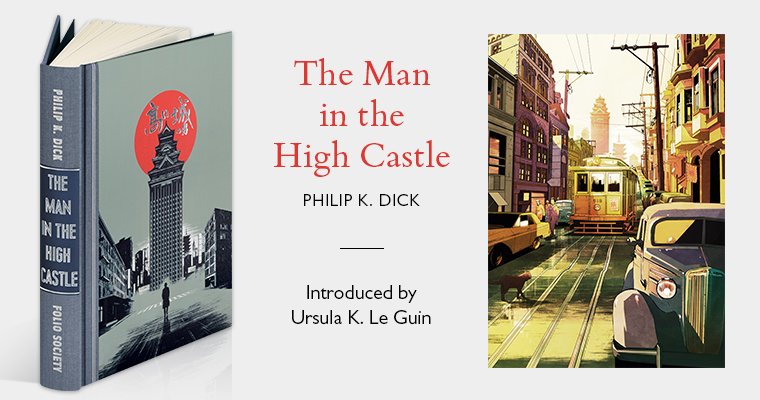 7 thoughts on “The Man In The High Castle Multimedia Report”