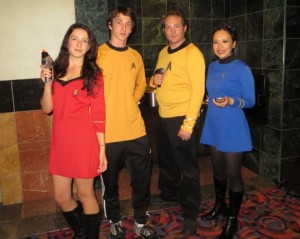 Starfleet International ship members joined the press and promotion winners at a special premiere of Star Trek: Into Darkness on May 15 in Redwood City, CA. Science Fiction/San Francisco’s Jean Martin attended in uniform and wrote up the event for the San Francisco Examiner with this added fashion insight:

For the new movie, “Star Trek: Into Darkness,” costume designer Michael Kaplan used the Original Series Starfleet uniforms as inspiration but made them look a bit more modern and even more figure-hugging. The result is young, hip and ready to be embraced by a new generation of fans and costumers.

And is the film good? Jean says the audience enthusiastically applauded at the end.