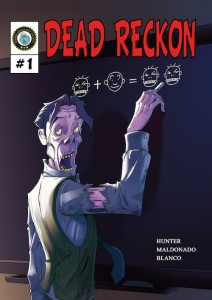 Sometimes classroom learning is deadly dull. But what if you could make it deadly exciting?

Zombie-Based Learning by David Hunter is doing that with the subject of geography. He started a year ago. With money raised on Kickstarter, Hunter produced 10 projects and over 70 daily lessons that taught to the 2012 National Geography Standards. He also produced the first issue of a comic book, Dead Reckon. The comic’s zombie narrative answers the question “Why do I need to know this stuff?” by dramatizing situations where the knowledge makes a life-and-death difference.

Now Hunter would like to publish four more issues of the comic. He’s opened another Kickstarter campaign to corral $13,000 by July 2.

To date the Zombie-Based Learning Geography curriculum has been shipped to around a dozen countries including Australia, Tanzania, and the UK. An estimated 50-100 classrooms are using it.