(1) RAGE AGAINST THE MACHINE. One of the biggest news stories in the world today — “Large Hadron Collider: Weasel causes shutdown”.

The Large Hadron Collider particle accelerator at Cern is offline after a short circuit – caused by a weasel.

The unfortunate creature did not survive the encounter with a high-voltage transformer at the site near Geneva in Switzerland.

The LHC was running when a “severe electrical perturbation” occurred in the early hours of Friday morning.

What did they discover when they bombarded the weasel with neutrinos? That it just made him mad?

(2) TIME FOR REFLECTION. They took the covers off the mirrors of the James Webb Space Telescope for the next round of work, the BBC reports.

Revealed for the first time in all its glory – the main mirror of the James Webb Space Telescope, which will be launched in 2018.

JWST is regarded as the successor to Hubble, and will carry technologies capable of detecting the light from the first stars to shine in the Universe.

Paramount in that quest will be a large primary reflecting surface.

And with a width of 6.5m, JWST’s will have roughly seven times the light-collecting area of Hubble’s mirror.

It is so big in fact that it must be capable of folding. Only by turning the edges inwards will the beryllium segments fit inside the telescope’s launch rocket.

The observatory is currently under construction at the US space agency’s Goddard Space Flight Center in Maryland.

When in recent months engineers stuck down the segments to their support structure, each hexagon had a cover on it.

Only now, as the engineers prepare to move to the next stage of assembly, have those covers been removed to reveal the full mirror….

Leaving such a sensitive surface exposed even for a short time may appear risky. The fear would be that it might get scratched. But the European Space Agency’s JWST project scientist, Pierre Ferruit, said that was unlikely.

“The main danger is to get some accumulation of dust. But it’s a cleanroom so that accumulation is very slow,” he told BBC News.

“They need to rotate the telescope to get access to the back, and the protective covers were only resting on the mirror segments, so they had to be removed before the rotation.

“When the mirror is upside down, the exposure to dust will be much less, and I doubt anyone will be allowed to walk underneath.”

(3) NEWT SCAMANDER SCREENPLAY. The “Thursday Book Beat” post at Women Write About Comics alerts Harry Potter fans that another Rowling publication is on the way.

Potterheads might not be getting an eighth novel in the Harry Potter series, but J.K. Rowling seems committed to giving her fans new material to devour. She announced that Fantastic Beasts and Where to Find Them wouldn’t just be available as a film on November 18, but that the screenplay would also be published on November 19. Newt Scamander’s adventures in the United States may be a balm for readers who can’t get to London to see Harry Potter and the Cursed Child, though this announcement also begs the question: why publish the screenplay in the first place when the film will still come out first?

(4) REUBEN NOMINEES. The five cartoonists nominated for this year’s Reuben Award have been announced. This award is generally considered the highest honor a US cartoonist can receive. It is presented yearly by the National Cartoonists Society.

The nominees in the rest of the categories are here at Comics Beat.

(5) CLASS OFFERED BY RAMBO AND SWIRSKY. Rachel Swirsky posted details on  “Retelling and retaling: Take a class with me and Cat Rambo”

Personally, I love retellings. As a kid, I had a collection of picture books retelling the Cinderella story in a dozen different settings. SFWA president Cat Rambo and I are teaching a class on the subject.

How is that possible?

Well, when it comes to Chip Delany, all things are possible.

On June 18, 2001, while Chip was in the middle of a book tour supporting the 25th anniversary republication of Dhalgren, I interviewed him at Bistro Bis in the Hotel George. The recording I made that day wasn’t created to be heard, but was merely a tool so it could be transcribed and run as text in Science Fiction Weekly, a site I edited during my 13 years at the Syfy Channel…. 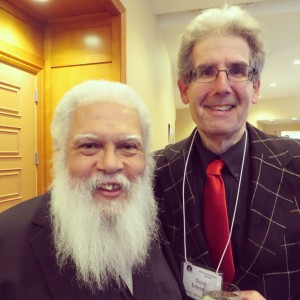 Who’ll be on the next installment of this podcast?

I’m not yet sure of the identity of my next guest, but I’ll be at StokerCon in Las Vegas the second weekend of May—where I’ll either win a Stoker Award or, in losing, tie at six for the most nominations without a win—and while there I plan to record several new episodes.

So it might be award-winning poet Linda Addison. Or writer Mary Turzillo, who won a Nebula Award for a story I published when I edited Science Fiction Age. Or it could be writer Gene O’Neill, with whom I attended the Clarion writers workshop way back in 1979 when we were still both getting started. (More time traveling!)

(10) VOTE. The Internet Movie Database is running a poll on “Your favorite ship’s commander?”

Everybody is in there from Kirk, Picard and Janeway, to the captain of The Love Boat, and Captain Kangaroo….

“Cup and Table” is my favorite of Tim Pratt’s stories–and it has a lot of competition. To explain how much competition, let me tell an anecdote about the audio magazine I used to edit, PodCastle.

(12) LIFE IN THE VAST LANE. In BBC’s article “Where to find life in the blackest vacuum of outer space” there is, says Chip Hitchcock, a “Shoutout to Hoyle, but not Anderson (who IIRC wrote about something much more like their topic).”

On the face of it space is dark, cold and full of lethal radiation – but maybe life has found a way to cling on in the blackness

First, we had better agree on what counts as “life”. It does not necessarily have to look like anything familiar.

As an extreme case, we can imagine something like the Black Cloud in astronomer Fred Hoyle’s classic 1959 science-fiction novel of that name: a kind of sentient gas that floats around in interstellar space, and is surprised to discover life on a planet.

But Hoyle could not offer a plausible explanation for how a gas, with an unspecified chemical make-up, could become intelligent. We probably need to imagine something literally a bit more solid.

While we cannot be sure that all life is carbon-based, as it is on Earth, there are good reasons to think that it is likely. Carbon is much more versatile as a building block for complex molecules than, say, silicon, the favourite element for speculations about alternative alien biochemistries.

The next day we drove across all of Germany to the Czech Republic, and I got to experience the autobahn, which my whole life has been this sort of mythical place that has no speed limits, and is filled with drivers that understand slow traffic stays right, and where they never camp in the left lane, and in fact, if you’re blocking the left lane, they’ll come right up on your bumper at 100 miles an hour, honking, and flashing their lights. It was a place devoid of mercy, unforgiving of weakness. So we set out.

Apparently there are two kinds of tourist drivers on the autobahn. Those who are weak, fearful, whose crying pillows smell of lilacs and shame, who stay in the truck lane, or who wander out into the left occasionally, timidly, to be honked at and chased aside by awesome Teutonic Super Drivers…

And the other kind is the American who manages to average 180km an hour across all of Germany in a Volvo diesel station wagon.

It was AMAZING. I felt like a race car driver across an entire country. You know why German cars don’t have cup holders? Because if you stop to drink while driving, YOU WILL DIE. And you should. You need to be on. I’d get a gap, jump out to the left, floor it (because fuel economy is for hippies I’m on the mother f’ing autobahn!),  and nobody pulls out in front of me in a minivan to enforce their personal speed limit, people ahead of me going slower (like 100mph) immediately get out of the way, and when some bad ass comes up behind me in a super car, I get out of his way, and then they blast past me like I’m standing still.

(14) CUNIEFORM COMPUTING. ScreenRant hopes it has listed “12 Facts You Don’t Know About George R.R. Martin” but chances are you already know all but a couple of them.

4. The Magic of the Wordstar 4.0 Computer

Martin is a dedicated user of the WordStar word processor software, which was the preeminent word processor back in the 1980s, that ran on Microsoft DOS. Martin is one of a handful of famous writers who use the WordStar 4.0 Computer that utilizes a DOS operating system. The other notable users are William F. Buckley Jr., Ralph Ellison, Robert J Sawyer, Anne Rice, and Andy Breckman (of the tv show Monk). So he’s one of the few people left on planet Earth that uses this word processor.

In an interview with Conan O’Brien, George R. R. Martin explained his reason for choosing such a classic program. “Well, I actually like it. It does everything I want a word processing program to do, and it doesn’t do anything else,” Martin said. “I don’t want any help. I hate some of these modern systems where you type a lowercase letter and it becomes a capital. I don’t want a capital! If I’d wanted a capital, I would have typed a capital. I know how to work a shift key!”

[Thanks to Chip Hitchcock, and John King Tarpinian for some of these stories. Title credit belongs to File 770 contributing editor of the day ULTRAGOTHA.]