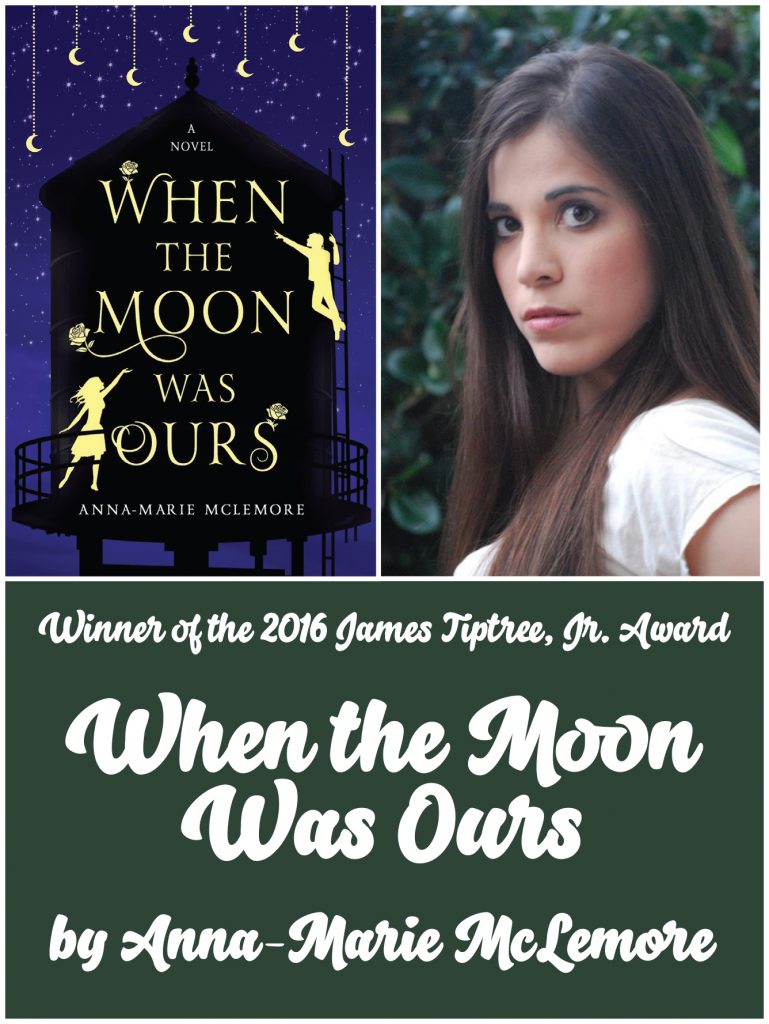 The James Tiptree, Jr. Literary Award Council has announced that the winner of the 2016 Tiptree Award is Anna-Marie McLemore for her novel When the Moon Was Ours.

The James Tiptree Jr. Award is presented annually to works of science fiction or fantasy that explore and expand the understanding of gender and gender roles. The winner receives $1,000 in prize money, a specially commissioned piece of original artwork, and chocolate.

Tiptree winner McLemore, along with authors and works on the Honor List, will be celebrated at WisCon over Memorial Day (May 26-29) Madison, Wisconsin. McLemore will attend the award ceremony.

The Council provided a description of the winning work, and an honor list of recommended works.

When the Moon Was Ours by Anna-Marie McLemore (Thomas Dunne Books/St. Martin’s, 2016)

This novel is a fairytale about Samir, a transgender boy, and Miel, an orphan girl who grows roses from her wrists and is bullied as a result. In fact, there is a fairytale within the fairytale, the first chapter telling us the version of the story that mothers would tell children for years after — before also telling us what that story leaves out. Then the book takes us through all of it, step by step, exploring the heartache and frustration that being and loving differently generates. Beautifully, the novel never lets go of its unique magical realism framework. While the thoughts and emotions these characters share are incredibly familiar to anyone who is queer or trans or has loved someone who is queer or trans, the imagery and particular scenarios the characters encounter are also completely bright and new.

In the author’s note at the end of the book, Anna-Marie McLemore tells us that when she was a teenager she fell in love with a transgender boy who would grow into the man she married. This is their story, reimagined as legend. 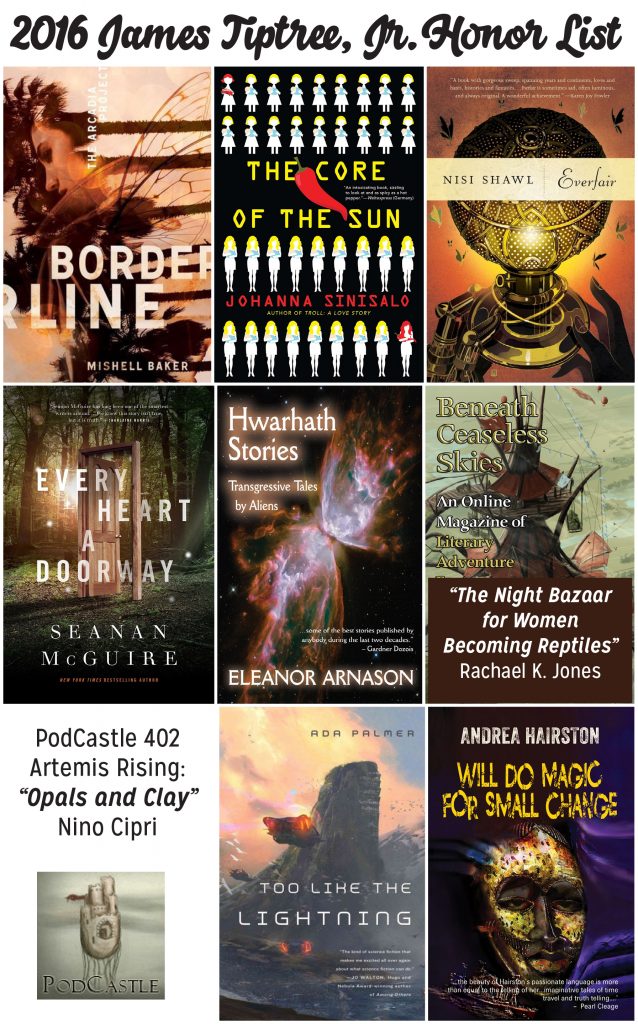 In addition to selecting the winners, the jury chooses a Tiptree Award Honor List. The Honor List is a strong part of the award’s identity and is used by many readers as a recommended reading list. These notes on each work are excerpted and edited from comments by members of this year’s Tiptree Award jury.

Eleanor Arnason, Hwarhath Stories (Aqueduct Press, 2016) — This is a wonderful collection of stories that examine the ways that culturally, deep-rooted assumptions around gender restrict vocation and recognition of skills. Arnason tells of a culture with significantly different gender assumptions and customs that lead to a number of subtly shifted societal impacts — both positive and negative.

Mishell Baker, Borderline (Saga Press, 2016) — A fascinating whodunit with wonderful characters, Borderline spotlights diversity and intersectionality. Most of the characters in this novel are viewed as disabled by others, even by each other. But the characters’ so-called disabilities give them advantages in certain situations. Understanding this helps the characters love each other and themselves. Almost every character can be described as having attributes that are both disabilities and advantages. What builds us up can bring us down. Or put another way: our imperfections are openings to beautiful achievements.

Nino Cipri, “Opals and Clay” (Podcastle, 2016) — A beautiful love story about solidarity. With just three major characters, this story does a lot with gender, demonstrating how gendering can be something one does to control or out of love.

Andrea Hairston, Will Do Magic for Small Change (Aqueduct Press, 2016) — A beautiful story of magic and love that spans two centuries and three continents, moving between times and places through a book-within-a-book structure. Its 1980s protagonists are a family who has been torn apart by an act of homophobic violence. Through a discovery of their past, they are able to reconnect and find love again. Among other things, this novel depicts an amazing range of queer characters. Importantly, the book de-colonizes these representations, making queerness not a white or American thing, but something that emerges in different shapes and structures at different times and places, particular to individuals as well as the cultures and communities that they are a part of.

Rachael K. Jones, “The Night Bazaar for Women Becoming Reptiles” (Beneath Ceaseless Skies, 2016) — A moving story set in a world where people live separate lives by night and day, with an opposite-sex lover by day and same-sex lover by night as the standard family structure. The theme of being trapped in one’s body and circumstances and in the customs of one’s times is dealt with well. The metaphor of a city/body that traps people in prisons of identity was very powerful. A surprising (yet well set up) twist to the story broadens its scope.

Seanan McGuire, Every Heart a Doorway (Tor Books, 2916) — This is a lovely YA novel about teenagers who return to our world, against their wishes, from magical lands that they entered through secret pathways — a magic door, an impossible stairway at the bottom of a trunk, a mirror. Their parents cannot understand their pain and misinterpret the stories their children tell and send their children to Miss West’s Home for Wayward Children. Miss West, herself a returned child, helps them deal with their separation or return to what they all think of as their real homes. This novel came to the attention of the Tiptree jury because of the reasons the children are taken from or rejected by their magical worlds. The protagonist, Nancy, is asexual, and finds an ideal world through her door. A character named Kade was born Katie, and discovers he is a boy, not a girl. He is thrown out of Fairyland as punishment for his transition. Two twin girls named Jack and Jill take up identities opposite from those their parents imposed upon them. There are beautiful lessons here about the importance of finding one’s home–that place where one can be one’s self. An emotionally engaging novel.

Ada Palmer, Too Like the Lightning (Tor Books, 2016) — This book will start conversations about gender, philosophy, religion, government, even war. The judges perceived contradictions within this book that may be resolved in the sequel, but these only serve to spark interest. In the future in which it is set (the twenty-fifth century of our world), gendered language is considered taboo in most circles and gender/sex-related cues are minimized and overlooked in clothing, vocation, and all other public areas of life. However, the book slowly reveals that gender stereotypes, sexism, and sexual taboos still remain strong despite the century’s supposed enlightenment and escape from such notions.

Johanna Sinisalo, The Core of the Sun (Grove Press/Black Cat, 2016) — This emotional, moving and thought-provoking novel, set in an alternate present in Finland, provides a critique of heteronormativity, eugenics, and all forms of social control, done uniquely and with humor. In this alternate present, the government values public health and social stability above all else. Sex and gender have been organized as the government sees fit, much to the detriment of women, who are bred and raised to be docile. All .drugs, including alcohol and caffeine, have long been banned. Capsaicin from hot peppers is the most recent substance to be added to the list. Our protagonist, Vera/Vanna, is a capsaicin addict. Consuming peppers provides an escape from a world that has treated her horribly. Most chapters are from Vera/Vanna’s perspective, but others relate the history, laws, fairytales, and other literature of this fictional Finland.

Nisi Shawl, Everfair (Tor Books, 2016) — In this gorgeous steampunk revisionist history of anticolonial resistance, a coalition of rebels defeat King Leopold and transform the former Belgian Congo into Everfair: a new nation whose citizens comprise Africans, European settlers, and Asian laborers. Told from many different perspectives, the story switches among the viewpoints of a dozen protagonists. This novel shows how relationships can grow over time between people of different races, classes, and religions as they build community together. Characters work through their internalized racisms and demonstrate how this is necessary for those in interracial relationships.

In addition to the honor list, this year’s jury also compiled a long list of twelve other works they found worthy of attention.

The Tiptree Award invites everyone to recommend works for the award through the recommendation page at the website, where donations are welcomed to help fund the award, and where accounts of past winners and works, with much other information, can be found.