By Mark L. Blackman: On the rainy (though not snowy) evening of Tuesday, April 3, at its venue, the Brooklyn Commons Café in Downtownish Brooklyn, the New York Review of Science Fiction Reading Series featured offerings from authors Chris Claremont and Chandler Klang Smith. The event was guest-hosted by Amy Goldschlager, an editor, proofreader, book/audiobook reviewer, and a past Curator of the Series.

Jim Freund, the Series’ Producer and Executive Curator, and the host of WBAI’s long-running Hour of the Wolf radio program on sf and fantasy, welcomed the audience and guests, cautioning again that the event was being Livestreamed. It was, he said the 50th anniversary of the film 2001: A Space Odyssey, and it would be marked the next night on Hour of the Wolf (Wednesday night/Thursday morning, 1-3 am, WBAI, 99.5 FM). (He teased that the story that was Kubrick’s inspiration wasn’t “The Sentinel!”) Tonight, though, he went on, tongue firmly in cheek, was the viewing party for Legion (Season 2 was premiering at 10 pm on FX – Claremont’s X-Men stories are the source material for the series – and, in truth, there was a more official event on the West Coast). After appealing for those who could to donate to support the Series (readings are free, with a suggested donation of $7, but no one is turned away), and thanking House Manager Barbara Krasnoff, Tech Ops Madeline Flieger, Tech Director Terence Taylor (not present, he was rather the Text Director) and the Café (tip the baristas!), he announced upcoming NYRSF readings:

July was unbooked at present, August would be a launch party for Bill Campbell’s two-part anthology, and the 28th Season would open in September with a commemoration of the 10th anniversary of Beneath Ceaseless Skies. He concluded by turning things over to the evening’s guest curator, Amy Goldschlager. 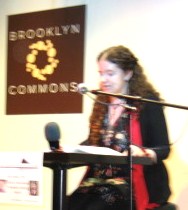 We have “two great readers tonight,” she began, before introducing the first, Chandler Klang Smith, quipping that this was “the last stop on her New York tour”. (She’d read two weeks earlier at the KGB Bar.) Her new novel The Sky Is Yours, we were informed, was listed by Entertainment Weekly as a “Best New Book.” Tor.com and Lit Hub compared it favorably with Infinite Jest, The Wall Street Journal called it “mesmeric … a great and disturbing debut,” and NPR described it as “a wickedly satirical synthesis that underlines just how fractured our own realities can be during periods of fear, unrest, inequality and instability.” Goldschlager added that it was “a very New York kind of novel.”

Smith, who read from the novel, concurred; Empire Island is loosely based on a future New York City, one with flying, fire-spitting dragons. Duncan Ripple V, scion of a wealthy family, is haunted by, then conscripted by, the Phantom Fireman, aka the faceless Leather Lungs, to be his protégé fighting dragon fires, as you’d expect, a major threat to the largely ravaged city.

During the intermission, there was a “very cool raffle,” a drawing for those who had donated, with the prizes being an Advanced Reading Copy (“ARC”) of The Sky Is Yours and a copy of Nightcrawler (which was fittingly won by a young fan). 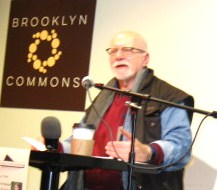 Chris Claremont, the evening’s second reader, is, of course, best-known for his unbroken 17-year run on Marvel Comics’ The Uncanny X-Men. (His story arc “Dark Phoenix” is the source material for next year’s major release Dark Phoenix, which will be mainstreamed into the Marvel Cinematic Universe.) Additionally, he has published nine novels, with more on the way. (As a fascinating aside, his papers are archived in the Rare Book and Manuscript Library at Columbia University, “right down the hall from three Gutenberg Bibles.”)

As part of the course he’s teaching at NYU in writing graphic novels (“The challenge of not being Frank Miller,” he noted, is having to find an artist), he wrote a sample story; his offering, a work-in-progress, grew out of that story. In our history, Kublai Khan tried to conquer Japan, but his fleet was blown off course by “the Divine Wind.” In his alternate history, China succeeds and the Samurai flee in boats, settling in the Hawaiian Islands, as well as in Alaska and California. Over the next few centuries, they bond with the indigenous peoples and spread, so that when Europeans arrive, they find an integrated warrior society, with horses. Thus, in the 21st century, the British domains (there is no American Revolution) end at the Alleghenys – however, somehow technology is present-day (the Internet, planes, GPS and CSIs), though we might quibble that different geopolitics would lead to technological divergences – and when a Maui-born girl is murdered in the no-man’s-land of Ohio, there’s a joint Anglo-Indigene investigation (and “spy stuff” … and unaccountably, there are dragons). 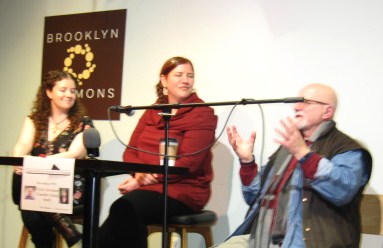 A Q-&-A session brought, the host and readers back to the platform, but it quickly mutated (sorry). Replying to a question, Claremont said that the impetus for the story was wondering why did the history of the Americas have to be Eurocentric? In this version, someone else got here first, and having been evicted from Japan by China, they resist the European invaders. He was next asked about writing comics. Whereas writing novels is a solo act, the comics writer has to communicate the story visually to the artist so that they can draw it (and different artists have different approaches). There has to be a balance of image and expository dialog, and additionally, the writer has to direct the action from the upper left to the bottom right and get the reader to turn to the next page. When there’s synergy between writer and artist, he said, it’s “mainstream comics at their best.” (As a reviewer, Goldschlager noted that doing audiobooks of graphic novels doesn’t work.) Neatly closing a circle, Claremont praised the cinematography of 2001 and “Kubrick’s genius” in having the ship slowly and silently move through space to a waltz. (Comics can afford better special effects than movies, and they can be done faster.)

As traditional, the Jenna Felice Freebie Table offered giveaway books, and, it being the 5th night of Passover, several sheets of matzoh.

The audience, which exceeded 50, included Sue Hollister Barr, Melissa C. Beckman, Susan Bratisher, Karen Heuler, Alexa and Nicholas Kaufmann, Barbara Krasnoff, Gordon Linsner, Herschel M. Rothman, and James Ryan. Over the course of the evening and afterward, and, for some, despite the holiday, many audience members availed themselves of the Café’s food, coffee bar, beer and wine.