When Ray Bradbury’s home was torn down in January, apart from mourning the result, fans’ most common plea was to have some fragment of the house as a Bradbury keepsake.

The Los Angeles location of The ReUse People did the deconstruction. They have agreed to convert part of the salvaged lumber to bookends which will be made available for sale, all with the encouragement and blessing of Ray’s family and friends.

Some of the proceeds will go to the Bradbury Center to help fund the re-creation of Ray’s home office.

A recent newsletter from The ReUse People previews their plan. Orders are not yet being taken — the actual sale information will come later.

Coming Soon to a Bookcase Near You!

Well, that’s what this month’s post is — a teaser. I’ll even tell you what it’s for — bookends.

Not exactly fireworks-worthy, I know, but these bookends are special. They not only prop up other people’s stories, they have a story of their very own. Here’s the short version:

In 1937, a three-bedroom, three-bath home was built in the Cheviot Hills area of Los Angeles. For 50 years this house was the home of legendary author Ray Bradbury and his family.

After Ray’s death in 2012 the house was sold to local architect, Thom Mayne, who, with wife Blythe, planned to build a home on the property. A lot of buyers (most, I’m sorry to say) would simply have torn down the old Bradbury house, but Mayne knew better. In 2014, his office asked TRP Regional Manager Arthur Renaud to submit a deconstruction bid. The contract was awarded to TRP, and the house was carefully taken apart by a TRP-certified deconstruction contractor in January, 2015.

Upon receipt of the materials, Los Angeles Retail Manager Jeff Cockerell suggested that some of the 2×6 lumber be used to make bookends to sell to the public. I was initially reluctant to take on such a challenge, but became intrigued by the idea of helping to perpetuate the legacy of one of America’s best known authors. Thanks to Jeff‘s persuasiveness, I eventually agreed.

So now, instead of merely promoting the reuse of salvaged lumber (always our biggest seller), we’re reusing some of it ourselves, to create Ray Bradbury bookends.

Several key people have been involved in the planning process, including Ray’s close friend, John King Tarpinian, Marsha LuMetta, trustee of the Bradbury estate, Ray’s daughter Alexandra, and Professor Jonathan Eller, Director of the Center for Ray Bradbury Studies at Indiana University. A portion of the sale proceeds will be donated to the Bradbury Center to help fund the re-creation of Ray’s home office, a major milestone in the Center’s ongoing efforts to preserve his works and legacy.

A limited edition of the bookends is scheduled for production in the next few weeks. Each set will be branded with a series number and the icon “451 F” to commemorate Ray’s best-seller, Fahrenheit 451. Also included will be a certificate of authenticity and thank you letter from TRP. Sales and shipping are expected to begin on or before June 1, 2015.

TRP will shortly be sending a separate announcement to subscribers with information on pricing and availability. Advance orders will not be accepted. Remember—this is just the teaser. 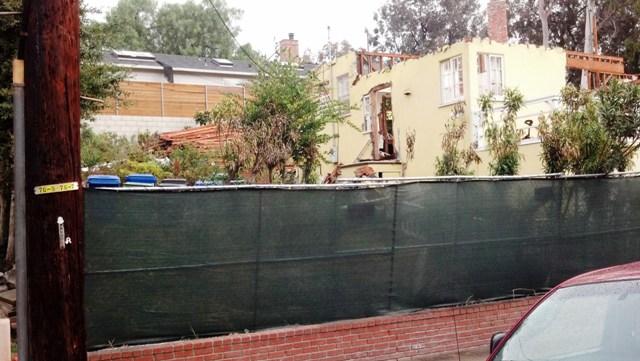 Lumber salvaged from Bradbury house can be seen stacked at the back of the lot in this photo by John King Tarpinian.