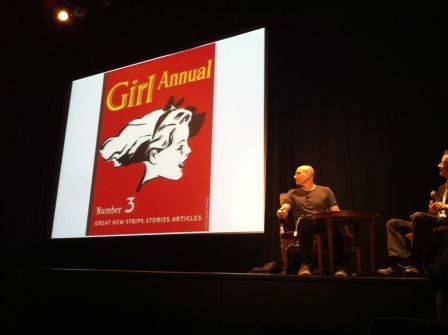 James Bacon says he was surprised as anyone to discover a French section of London. That’s where he was sent to report about the Bande Dessinée and Comics Passion festival for Forbidden Planet:

I am here for the inaugural event, a conversation between China Miéville and Paul Gravett. The weekend is billed as a series of ‘happenings’ by Gravett and a key difference is the nature of the staged encounters between French and British creators, who share a adoration of the medium of sequential art in all its forms. Gravett has rightly amassed a reputation for being a man who adores the subject and works so damnably hard at making events happen. Whether it be South London small press guys or academics or someone like me, just a fan, we all love his efforts and open, inclusive, intelligent style.