By Mark L. Blackman: On the summerlike spring evening of Wednesday, May 17th, the monthly Fantastic Fiction Readings Series presented authors E.C. Myers and Sam J. Miller at its longtime venue, the dimly-lit and aptly-named Red Room of the second-floor KGB Bar in Manhattan’s East Village. I arrived later than usual, and the crowd seemed at more than capacity.

Series co-host Matthew Kressel greeted the crowd, and reported on their current fundraiser on Kickstarter to cover the Series’ expenses. While the readings are always free and there’s no cover charge, it costs about $120/month (or $1,500/year) to run. He recited a partial list of “rewards”for donors (a fuller list may be found here), among them: signed copies of John Crowley books; from John Joseph Adams, trade paperbacks of Queers Destroy Science Fiction; from Ellen Datlow, “lots of books,”including Alien Sex; and from Neil Gaiman, four rare signed copies of his books. Additionally, Nancy Kress and Jeffrey Ford are offering Tuckerizations (that is, a character with the donor’s name in their books); John Langan to create a monster; and N.K. Jemisin and others critiques. The money, he assured, will be used for small stipends for the authors and to treat them to dinner after their readings. (Earlier Myers had kidded that there are no tote bags and the readers would not be interrupted mid-reading for a fundraising appeal.) He concluded by introducing the event’s first reader. 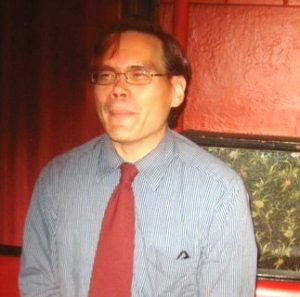 E.C. Myers (the “E” is for Eugene) describes himself as “assembled in the U.S. from Korean and German parts, and raised by a single mother and a public library in Yonkers, New York. ”He has published four novels, the first of which, Fair Coin, won the 2012 Andre Norton Award for Young Adult SF and Fantasy, and the subsequent The Silence of Six was selected by YALSA as one of its “Top Ten Quick Picks for Reluctant Young Adult Readers”in 2016. His next book will be DoubleThink, (he’s on a 1984 kick — the book very much fits the current zeitgeist), a collection of stories related to The Silence of Six. (He also writes for ReMade, a YA science fiction series from Serial Box Publishing, from which I heard Matthew Cody read earlier this month at the most recent NYRSF Readings event.)

His offering was from “Big Brother,”a story in Feral Youth, a multiauthor collected which he characterized as “Canterbury Tales as YA,”with each telling a story. The starting point is a 17-minute viral video of a 13-year-old girl sleeping and, by appearance, erotically dreaming (in “full-on When Harry Met Sally“mode) recorded by her teen older brother who has dreams of being a filmmaker. A glimpsed hovering presence, he and his friends deduce, is likely an incubus. The creepy aspects of the story were only somewhat relieved by their humorous comments.

After an intermission, co-host Ellen Datlow assumed the podium and exhorted us to thank the Bar by buying drinks (it was definitely a night calling for hydration), and announced upcoming readings:

She then introduced the second reader of the evening. 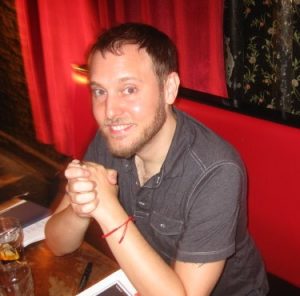 Sam J. Miller’s short stories have appeared in multiple “year’s best” anthologies and been finalists for multiple Nebula Awards as well as for World Fantasy and Theodore Sturgeon Memorial Awards. His short story “57 Reasons for the Slate Quarry Suicides”(from which he read at the KGB last year) won the 2013 Shirley Jackson Award. His debut novel The Art of Starving, which will be out in July, was called “Funny, haunting, beautiful, relentless and powerful … a classic in the making” by Book Riot. His second novel, The Breaks, will be published in 2018.

Like Myers, his selection was from a YA work, the forthcoming The Art of Starving; he read from the very beginning and the end. The protagonist, it seems, is not actually starving or even hungry, but simply “chooses not to eat.”He suffers from an eating disorder — though he emphatically rejects the label — in which he sees himself as “an enormous, fat, greasy, disgusting creature”while the rest of the world somehow sees him as “a scrawny bag of bones”and urges him to eat, thereby earning his undying hatred. Ultimately, he releases hundreds of pigs from a slaughterhouse and leads the “squealing army”to defile and destroy the homes of his perceived enemies.

Prior to the reading, Datlow, as usual, circulated, taking pictures. Her photos of the event may be seen on her Flickr page, linked to the Series’ website.