(1) NO NEED TO SAY MORE. Michael Swanwick recounts what he labels the shortest and most succinct discussion about the horror genre in the history of the speculative fiction community:

MICHAEL SWANWICK: “I don’t like horror because it scares me.”

ELLEN DATLOW: “That’s why I love it.”

(2) A FINE ROMANCE. Welcome to 21st-century dating. “This Man Is Suing His Date For Texting During ‘Guardians Of The Galaxy'”.

Texting during a movie is rude.

Brandon Vezmar from Texas is taking a stance on the issue by suing his Bumble date after she used her phone during a movie. The Austin American-Statesman reported that Vezmar filed a small court claim for $17.31, the price of a 3D showing of “Guardians of the Galaxy 2.”

“It was kind of a first date from hell,” he told the local newspaper.

The 36-year-old said that his date was on her phone “at least 10-20 times in 15 minutes to read and send text messages.” According to Vezmar, he told her she should text outside, so she left and took the car in which they both arrived.

Vezmar claimed he tried to text and call his date before taking the matter to court. He tweeted a screenshot once his date sent a statement to KVUE anonymously to say that, while she felt bad that his feelings were hurt, she chose to leave because he made her feel unsafe.

“His behavior made me extremely uncomfortable, and I felt I needed to remove myself from the situation for my own safety,” the statement read. “He has escalated the situation far past what any mentally healthy person would.”

Director James Gunn, who might have stayed safely out of this, unfortunately decided to show his ass, as if texting in the theater was the entire issue.

Why stop at suing? She deserves jail time! https://t.co/c41MWGz74M

But really, hairless Klingons? With a H.R. Geiger armor aesthetic?

It’s not like we haven’t seen the 60’s aesthetic embraced by modern television. Deep Space Nine went there and did it brilliantly — they arguably made the TOS USS Enterprise look even more gorgeous than any of her successors, and they didn’t change anything about her at all — just lighting and texture. Enterprise itself managed to authentically portray a pre-Kirk technology chic that had a more industrial feel, which was utterly believable as the ancestor to the softened look of the Kirk era. I do not accept that the Kelvinization of the Prime timeline was necessary to modernize the production. After all, the aesthetic of The Expanse and Dark Matter is thoroughly modern but doesn’t have the same Kelvin fascination with chrome and glass. Not that I want any Trek to go the grunge-fi look, but I do at least want Trek to honor it’s own identity. This feels like a rejection — purely a Han shot first decision.

(4) MESSAGE TO THE PAST. If the term “calendrical rot” hadn’t been invented for a different purpose, and we had a way to send it into the past, it would find the perfect Petri dish in this incredibly technical discussion of alternate timelines in Star Trek held on Reddit in 2015.

(5) SASQUATCH APPROPRIATED. In the Walrus, Robert Jago introduces his op-ed about Canada’s latest cultural appropriation controversy with an sff illustration: “On Cultural Appropriation, Canadians Are Hypocrites”.

Harry and the Hendersons is a 1987 fantasy movie about a Seattle family’s encounter with a friendly bigfoot (Harry) and their efforts to protect him from harm before releasing him in the mountains of the Pacific northwest. It’s a forgettable film, but it has undoubtedly been seen and heard in more Indigenous homes than has the story of Sasq’ets–the original sasquatch.

Sasq’ets, whose name was one of the few Halkomelem words to make their way into English, was one of a host of other legendary “wild people” living in the forests on the Pacific coast. For hundreds of generations, Salish and Kwakwaka’wakw children were raised on the stories of the wild people and taught to listen for their characteristic hu-hu-hu calls. Sasq’ets, along with Dzunuka, were said to capture wayward children, take them away from their families, and eat them. With their supernatural healing powers, the wild ones were thought to be invincible; only once was a wild person taken by angry villagers and burned alive. But to the mortals’ horror, the ashes began buzzing in a tiny chorus of little hu-hu-hu’s, and each particle sought out human flesh. This was the origin myth of mosquitos.

Sasq’ets taught our children to stay out of the forests at night. It connected us to our part of the world, in the same way that Hansel and Gretel or Little Red Riding Hood connected Europeans to their ancient forests–and possibly for the same purposes. Our stories are works of genius and beauty, and vital to our relationship with the land. By no means do I want to restrict our legends to Indigenous people. I want you to know about Sasq’ets, and the psychedelically odd stories of the spirit of the South Winds, and all of the legends of our country.

But when the story is taken from us and told by outsiders without our involvement, its identity can be lost, and Sasq’ets becomes Bigfoot. The cultural dominance of non-Natives means that a B-movie like Harry and the Hendersons can have more influence over Salish children than the legend that inspired it.

(6) WESTLAKE’S BOND. Daniel Dern says be on the lookout for copies of Donald Westlake’s James Bond novel(ization) released last fall. “I’ve already just put a reserve-request in to my library.”

Forever And A Death

In the mid-1990s, prolific mystery and crime thriller author Donald E. Westlake submitted two treatments for the 18th Bond film (which would ultimately become ‘Tomorrow Never Dies’)….Never one to waste a good story, Westlake turned his treatments into a novel.

Fewer Filers than normally expected might be familiar with Westlake, since he wrote near-zero scifi, by choice. OTOH, he wrote lots of great mystery/thriller/crime and other novels and stories, ranging from humorous, e.g. his John Dortmunder stories, and his tabloid-reporter ones, to serious, notably the ones written as Richard Stark.

My favorite Westlake book: Up Your Banners

(7) MACE WINDU GETS HIS OWN BOOK. The Jedi have always been the galaxy’s peacekeepers — but with the Clone Wars on the horizon, all that is about to change.

This August, writer Matt Owens (Elektra) will team with artist Denys Cowan (Nighthawk, Captain America/Black Panther: Flags of Our Fathers) to unveil the exciting story of one of the Jedi’s greatest warriors in STAR WARS: JEDI OF THE REPUBLIC — MACE WINDU #1!

One of the most accomplished and storied members of the Jedi High Council, his wisdom and combat prowess are legendary. Now, in this new story, readers will get to see Mace Windu lead his Jedi into battle, and face the ultimate test of leadership! 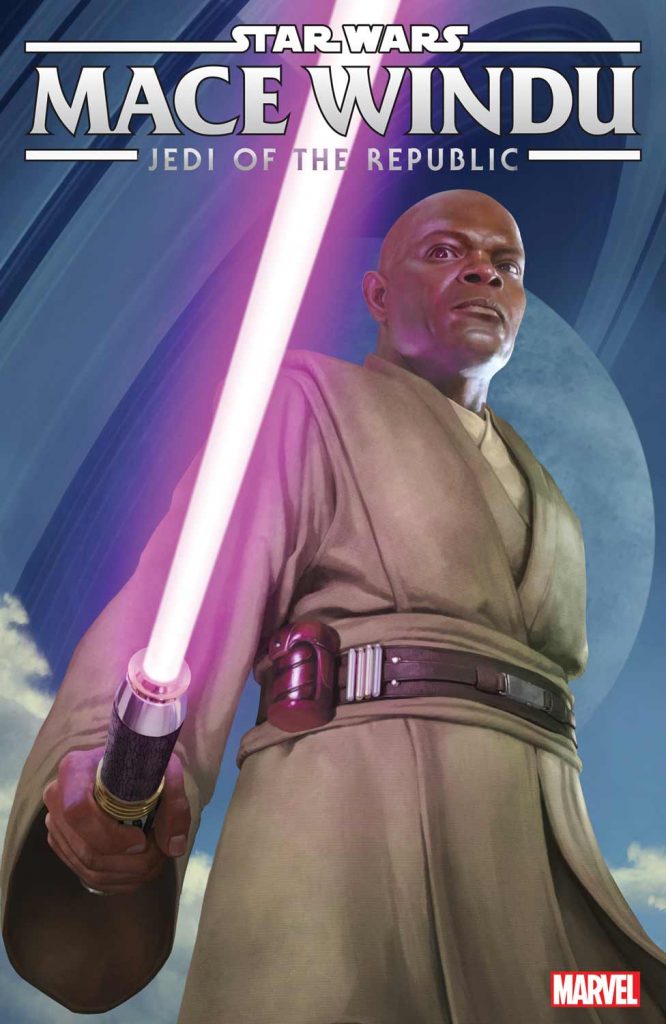 (12) WHIP OUT YOUR ROLL OF HUNDREDS. Nicole Pelletier on Good Morning America has a piece called “Classic Disney animation art featuring Snow White, Pinocchio headed to auction” about how a tranche of Disney cels from the 1940s is headed for auction in an event sponsored by Bonhams and Turner Classic Movies.

(13) WARNING LABEL. While I was browsing Bertie MacAvoy’s Amazon page, I especially enjoyed this self-introduction: 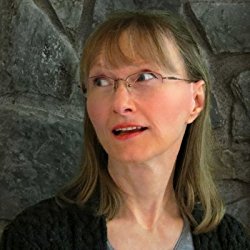 If you are young to the S.F. field and don’t know who I am, I will prep you by warning that I often kill off my heroes, sometimes at the most unexpected times. But never in a depressing manner. I’ve never wanted to depress my readers. My outlook is essentially comic.

(14) DRYING OFF. This may be the first good news I’ve ever heard about a convention associated with the Ozarks. Nerd & Tie’s Trae Dorn reports how some fans are overcoming a natural disaster: “West Plains, MO Based Oz-Con Plans Game Day Event to Make Up For Canceled Day of Con”.

I think any reasonable person would forgive the con, considering this was an extreme, unpredictable situation where homes and lives were literally lost. What’s the Sunday of a con compared to that? To the extreme credit of the Oz-Con organizers though, they still want to try to make it right.

Yesterday Oz-Con organizers announced an event they’re calling “Flood Con.” It’s a free game day the con is hosting from 9:00am until 10:00pm on June 17th at the Missouri State University-West Plains Student Rec Center. Admission is free, but they’ll also be accepting cash donations and canned food items to help with ongoing flood relief in the area. There will be video games, tabletop games, and fellow geeks to have a grand old time with.

Admittedly, I haven’t heard much about sff in the Ozarks — just that famous story about the time Larry Niven arrived expecting to be GoH of Ozarkon only to find out the con had been cancelled. (Fans involve swear they tried to get a message to him, but in those pre-internet days it failed to reach him on the road.)

(15) FAME IN PIXELS. Who needs a monument when you can be an answer on Jeopardy!

I am now functionally immortal. It's the tv show but still >FUNCTIONAL IMMORTALITY< pic.twitter.com/hsLgrOg2VG

(16) LOVECRAFT COUNTRY TO TV. Get Out writer-director Jordan Peele and J.J. Abrams’ Bad Robot and Warner Bros Television are teaming on Lovecraft Country, a one-hour drama that has been given a straight-to-series order by HBO.

There is connective tissue to Peele’s breakout genre feature Get Out, which brought a Black Lives Matter theme to the horror genre. Lovecraft Country, the 2016 novel from Matt Ruff, focuses on 25-year-old Atticus Black. After his father goes missing, Black joins up with his friend Letitia and his Uncle George to embark on a road trip across 1950s Jim Crow America to find him. This begins a struggle to survive and overcome both the racist terrors of white America and the malevolent spirits that could be ripped from a Lovecraft paperback. The goal is an anthological horror series that reclaims genre storytelling from the African-American perspective.

[Thanks to Carl Slaughter, Andrew Porter, JJ, Dawn Incognito, Daniel Dern, and John King Tarpinian for some of these stories. Title credit goes to File 770 contributing editor of the day Ky.]