By Daniel Dern: For comic book fans who were concerned that The Dark Knight III: The Master Race — Frank Miller & Brian Azzarello’s 8-part comic book/graphic novel follow-up to Miller’s graphic novels The Dark Knight Returns (“TDKR”) and its sequel The Dark Knight Strikes Again — would somehow involve Nazis, I can happily report that Issue 2 (which came out this week) seems to point strongly to that not being the case, with another likely candidate for that title-starring position. 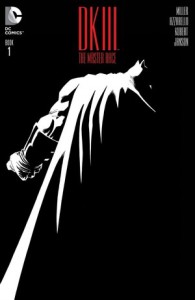 (If you haven’t read tDKR and tDKSA, it’s worthwhile doing that first. Not essential, but helpful.)

Of course, it’s not impossible. But I think it very unlikely. (Remember, this is DC, not Marvel, so at least we shouldn’t have to worry about the Red Skull putting in his oar. OTOH, it’s not unfinessable.)

That said, I’m two issues in, I’m happy so far.

(At $5.99 each, I’ll respect people who want to wait until it’s done, and out in trade paperback, and then borrow it from their library.)

1 thought on “Non-Spoiler Reassurance About “The Dark Knight III””