(1) The stars came out for White House Astronomy Night.

Watch live as the @WhiteHouse hosts #AstronomyNight at 7pm ET. Here's what to expect: https://t.co/3B56ANr3oe pic.twitter.com/MCnBJRjbNi

Why are moon rocks tastier than earth rocks? Because they're meteor! #astronomynight pic.twitter.com/ZYKV96MZT3

This #AstronomyNight, @POTUS called the @Space_Station! See our Tumblr blog for a breakdown: https://t.co/MYIV9j822y pic.twitter.com/GSWGOvzqHK

When, in a telephone interview, China Daily reminds him of that comment, he replies: “It’s not a joke. Aliens may arrive at any time. When it happens, everything, social and economic reform, educational problems, international conflicts or poverty, will become much less important, compared with the alien crisis.”

Big countries such as China and international organizations such as the United Nations need to be ready for such an eventuality, he says.

“It does not necessarily involve a lot of money and human resources. But we should prepare, in the fields of politics, military, society and so on. The government should organize some people to do related research and preparations for the long term.”

Unfortunately, he says, “no country seems to have done this kind of thing”.

In the postscript for the English version of The Three-Body Problem, translated by Ken Liu, Liu Cixin says: “I’ve always felt that extraterrestrial intelligence will be the greatest source of uncertainty for humanity’s future. Other great shifts, such as and ecological disasters, have a certain progression and built-in adjustment periods, but contact between mankind and aliens can occur at any time. Perhaps in 10,000 years the starry sky that mankind gazes upon will remain empty and silent, but perhaps tomorrow we’ll wake up and find an alien spaceship the size of the Moon parked in orbit. … The appearance of this Other, or mere knowledge of its existence, will impact our civilization in unpredictable ways.”

(3) Bob Byrne’s “The Public Life of Sherlock Holmes: Tying in the BBC Sherlock Special” at Black Gate has a lot of good information.

Back in July, what seems to be the most popular ‘The Public Life of Sherlock Holmes’ post appeared here at Black Gate. I looked at what I think went wrong with season three of the BBC’s Sherlock. I included the just-released ninety-second, ‘first look’ video for the upcoming Special, to be aired around Christmas. And I pointed out it seemed to be full of the “Look how clever we are” bits that I lamented in my post.

Now, just about everyone, including myself, loves that the Special is set in Victorian times; unlike the episodes in the first three seasons. Cumberbatch and Freeman would be given their first (and quite likely, only) opportunities to play Holmes and Watson in the Doyle mold. I view it as a chance for the show to get back on track and reclaim the multitude of fans it lost during season three.

I had multiple conduits for suggestions, and the comments section was just one conduit.

But he doesn’t identify what those sources for the majority of slated Sad Puppy 3 fiction were.

(5) Francis W. Porreto does not approve – “Really Quickies: From The Garbage Heap” at Bastion of Liberty.

If you’d like a gander at “how the other side emotes,” take a look at this post at this hard-to-describe site, particularly the comments that follow commenter “alauda’s” citation of this bit of dark foreboding. These past two days a fair amount of traffic has come here from there.

Note the complete lack of rational analysis. Note the immediate and unconditional willingness to condemn me, as if the scenario I wrote about were something I actually want to happen.

(6) Alyssa Rosenberg, while commenting on “The downside of cultural fragmentation” in the Washington Post, touches on a familiar topic —

Debates over what kinds of books, movies, television shows, comics and video games get awards are often a proxy way of debating what our cultural values ought to be. The alternative slates that attempted to wrest control of Hugo nominations were based on the idea that awards voters had over-prioritized identity politics over the quality of writing and plotting; GamerGate erroneously asserts that there’s a movement afoot to ban or stop the production of video games with certain themes or images. While I don’t agree with the premises of either of those two cultural movements, I do think left cultural criticism has sometimes asserted political litmus tests for art in recent years, and that elements of the right, spurred by the sometime success of this approach, have fallen into the same patterns (for a good example, see the suggestions that the action movie “Mad Max: Fury Road” was anti-male).

(7) After Steve Davidson of Amazing Stories picked apart the Trek-related fanhistory in Kevin Trainor’s post on Wombat Rampant, Dystopic followed with his own critique of what Davidson had to say about Trainor on Declination.

As my readers probably know already, I consider myself somewhere on the Puppy spectrum of the Science Fiction community. There’s quite a bit of difference between the Sad Puppies, who one might call the reformists, and the Rabid Puppies who are mostly of the opinion that Worldcon and the Hugos should be burnt to the ground and set on fire by their own Left-wing, Social Justice proponents.

Either way, though, both camps agree that the existing community is hopelessly corrupt, cliquish, and prone to a particular animus against Conservatives and Libertarians. This prejudice is such that their works are repeatedly voted down from awards, publishers like Tor Books are run by individuals openly hostile to alternate political affiliations, and backroom deals are made to secure nominations for authors based on political backgrounds and special interests.

Steve Davidson of Amazing Stories confirms this for us in a ridiculous post, so loaded up with Strawmen that he might as well be the Scarecrow from the Wizard of Oz. Let’s allow him to hang himself with his own rope, shall we?

(8) Workaholics actor Blake Anderson appears in the Halloween episode of The Simpsons:

“Well, you know, we kind of feel a little disrespected by Homer and we show up at his doorstep basically looking for revenge,” Anderson explains. “So it turns into a full onPanic Room situation, where he’s kind of stuck in the attic and looking for him. We’re out for blood for sure.”

In the vein of the Treehouse episodes, Anderson says this one is not necessarily “piss your pants” scary, but, he assures, “me and Nick Kroll definitely brought our creepy to the table for sure.”

(9) Is this a clue to the future of Game of Thrones? 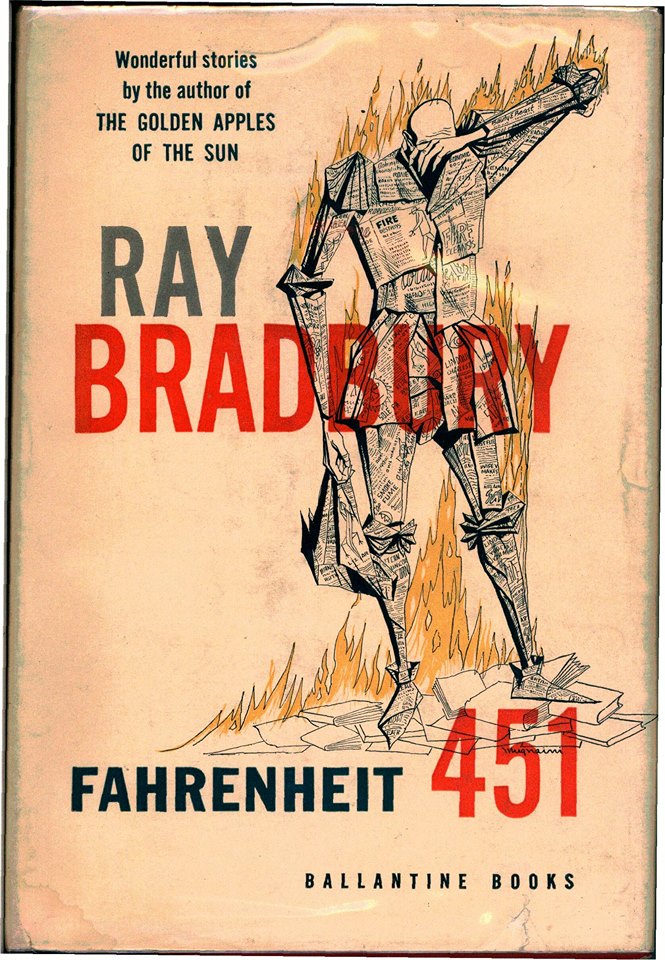 FAHRENHEIT 451 was deposited for copyright at the Library of Congress on October 19, 1953. Both the first edition hardbound and mass market paperback carry this publication date, although the paperbacks actually reached the market a month earlier.

The McCarthy era’s climate of fear lingered beyond 1953, however; in spite of the book’s initial critical success, the first paperback printing took seven years to sell out.

Coming in November, Bandersnatch: C.S. Lewis, J.R.R. Tolkien, and the Creative Collaboration of the Inklings (Kent State University Press) by Diana Pavlac Glyer and James A. Owen shows readers how encouragement and criticism made all the difference in books written by the Inklings. A companion coloring book by Owen is expected next spring.

(13) Learn how to make your pumpkin look like a galaxy nebula. 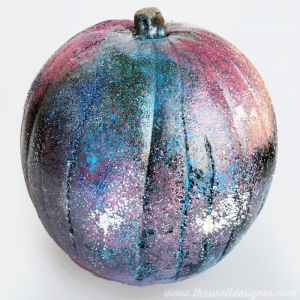 (14) Io9 says “The Glorious Poster For Star Wars The Force Awakens Has A Giant Planet Killer On It”. Almost needless to say, you can also see the full, high resolution poster there.

(15) This collection of “13 Creepy Bits of Bookish Trivia” at BookRiot lives up to its headline. Here’s one of the tamer entries.

(16) Tonight was the Terry Gilliam talk at the Alex Theatre. Crusading photojournalist John King Tarpinian snapped a picture of the marquee. 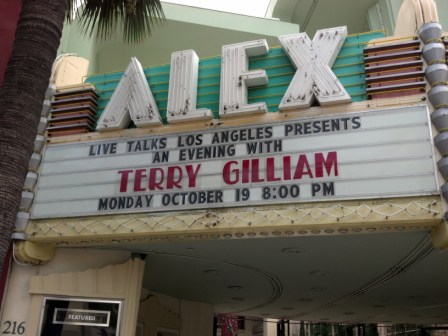 (17) Chuck Wendig in “About That Dumb Star Wars Boycott” begins…

Let’s imagine that you are, as you are now, a straight white dude. Except, your world features one significant twist — the SFF pop culture you consume is almost never about you. The faces of the characters do not look like yours. The creators of this media look nothing like you, either. Your experiences are not represented. Your voice? Not there. There exist in these universes no straight white dudes. Okay, maybe one or two. Some thrown in to appease. Sidekicks and bad guys and walk-on parts. Token chips flipped to the center of the table just to make you feel like you get to play, too. Oh, all around you in the real world, you are well-represented. Your family, your friends, the city you live in, the job you work — it’s straight white dude faces up and down the block. But on screen? In books? Inside comic panels and as video game characters? Almost none. Too few. Never the main characters.

It feels isolating, and you say so.

And as a response you’re told, “Hey, take what you get.” They say, can’t you have empathy for someone who doesn’t look like you? Something something humanist, something something equalist. And of course you can have that empathy because you have to, because this is all you know, because the only faces and words and experiences on-screen are someone else’s so, really, what else are you going to do?

Then one day, things start to change. A little, not a lot, but shit, it’s a start — you start to see yourself up there on the screen. Sometimes as a main character. Sometimes behind the words on the page, sometimes behind the camera. A video game avatar here, a protagonist there. And it’s like, WOO HOO, hot hurtling hell, someone is actually thinking about you once in a while. And the moment that happens, wham. A backlash. People online start saying, ugh, this is social justice, ugh, this is diversity forced down our throats, yuck, this is just bullshit pandering quota garbage SJW — and you’re like, whoa, what? Sweet crap, everyone else has been represented on screen since the advent of film. They’ve been on the page since some jerk invented the printing press. But the moment you show up — the moment you get more than a postage stamp-sized bit of acreage in this world that has always been yours but never really been yours, people start throwing a shit-fit. They act like you’re unbalancing everything. Like you just moved into the neighborhood and took a dump in everybody’s marigolds just because you exist visibly.

During the construction of the universe, a young member of the Cosmos Corps of Engineers decides to break some fundamental laws in the name of self expression.

[Thanks to Will R., JJ, John King Tarpinian and Amy Sterling Casil for some of these stories. Title credit belongs to File 770 contributing editor of the day Jack Lint.]