There are growing fears a European probe that attempted to land on Mars on Wednesday has been lost.

Tracking of the Schiaparelli robot’s radio signals was dropped less than a minute before it was expected to touch down on the Red Planet’s surface.

Satellites at Mars have attempted to shed light on the probe’s status, so far without success.

One American satellite even called out to Schiaparelli to try to get it to respond.

The fear will be that the robot has crashed and been destroyed. The European Space Agency, however, is a long way from formally calling that outcome.

….A Closed and Common Orbit picks up right after the final events of The Long Way to a Small, Angry Planet, with the once-Lovelace Artificial Intelligence, now reset and memory-less, finding a new life aboard a new body. Before, Lovelace had eyes everywhere and her task was to care for the health and wellbeing of the Wayfarer’s crew. Now, renamed Sidra, she finds herself in a new–and illegal–synthetic body, trying to cope with a limited, isolated, and physical existence that simply doesn’t seem enough.

(3) IT COMES IN PINTS? Emily Asher-Perrin undertakes a highly scientific thought experiment at Tor.com – “How Much Beer Does it Take to Get a Hobbit Drunk?”

But how much can a hobbit actually drink?

There is a joke in the Lord of the Rings films that is not present in the books–while hanging around at The Prancing Pony, Merry comes back to the table with a great big tankard. and Pippin asks what he’s drinking:

“This, my friend, is a pint,” he says wickedly.

It makes sense that hobbits would veer toward smaller pours because they are smaller people–you wouldn’t give a five-year-old a pint glass of juice because they have smaller stomachs and the glass would be harder to manage in smaller hands. But even if the average hobbit goes from half-pint to half-pint, that doesn’t mean that their rates of consumption are low in the alcohol department.

(4) ALLUSION OR UNCITED SOURCE? At Electric Literature, Carmen Maria Machado, in “How to Suppress Women’s Criticism”, argues that Neil Gaiman’s jacket blurb for Shirley Jackson: A Rather Haunted Life essentially did a disservice to Joanna Russ.

It was only then that I saw the lead blurb at the top of the dust jacket. Written by Neil Gaiman, it reads in part:

“Not just a terrific biography, but a remarkable act of reclamation: if there was ever a great writer of the twentieth century who fell victim to ‘How to Dismiss Women’s Fiction,’ it was Shirley Jackson.”

…That might seem like a lot of pressure to put on a blurb, especially because blurbs are an unavoidable part of a professional writer’s life. But Russ is dead. Jackson is dead. And in the thoughtless, uncredited, mangled deployment of that phrase —even in praise— Gaiman broke the chain between the two of them; a prominent, living male artist inserted between Russ’ ideas and Jackson’s reality. It would have been such a little, correct thing to keep that link alive — a gesture whose implications would have far outweighed its size. And yet, like so many tiny, seemingly insignificant cultural gestures — whose collective weight can buoy, or suffocate — it is a symptom of a larger condition.

(5) LOST LIGHT. James Davis Nicoll sent this link with the note, “Female blogger silenced.” After six years in the fight, wundergeek’s (Anna Kreider) game industry blog Go Make Me a Sandwich (how not to sell games to women) is signing off.

While it is undeniable that my blog has resulted in positive change in some parts of the games industry and community, that change has come at tremendous personal cost. First and foremost, it’s cost me my reputation; because of this blog, I will always be “controversial”. Go Make Me a Sandwich started as a personal project, something that I started as a hobby because I wanted to write about something that was a growing area of interest for me. By the time it took off, the damage was done; my Google Rank has inextricably tied my name to feminism forever, and that can be dangerous. It’s certainly translated into a level of difficulty in my meatspace life that I never anticipated before starting this blog.

Writing this blog has also taken a tremendous toll on my mental health. The backlash that I’ve faced because of what I do here has been terrifying…..

There are also those who know about the abuse and choose to believe that the abusers aren’t the problem. The real problem is me: my feelings about my experiences of marginalization and harassment and how I express them. There are many in our community who think that it’s a bigger problem that I’m not nice about my feelings toward my abusers than it is that I’m being abused. So instead of holding the abusers accountable for their abuse, which is known and well-documented, they instead decide to publicly castigate me for committing the womanly sin of having feelings about a thing incorrectly…..

…. MY WHOLE GODDAMN LIFE I’ve been told that I was “too much”. Too loud. Too opinionated. Too brash. Too arrogant. Too abrasive. Too bossy. My whole life, people have been trying to shove me into a box that I just don’t fit in, no matter how hard I try – the box of proper womanhood. This blog was my place where I could be ME. Unapologetically. Loudly. Defiantly! And walking away from that feels like walking away from part of myself.

I’m sorry I couldn’t be stronger.

(8) IT BITES. Washington Post critic Nelson Pressley says you can pass on the local production of Zombie Prom.

That shine is missing in “Zombie Prom,” another campy 1990s off-Broadway musical getting its area premiere. Boy meet girl, boy loses girl, boy despairs and jumps into a vat of nuclear waste. He returns as a zombie — but can he still go the prom?

This is strictly for hardcore musical devotees who want to see what Dana P. Rowe and John Dempsey wrote before their musicals “The Fix” and “The Witches of Eastwick.” The Unexpected Stage Company, last seen showcasing Deb Margolin in “8 Stops,” isn’t giving buffs a particularly good look. Virtually the only number inspiring a grin is the 1950s-style girl-group ballad “Jonny Don’t Go” (“ . . . to the nuclear plant” is the rest of the plea), sung with nice comic understatement by Julia Klavans as the doomed Jonny’s girlfriend, Toffee. The rock-and-roll quartet tucked up onto a platform in a back corner of the stage tries to capture the feel of the 1950s sock-hop score but can’t quite swing it. Neither can much of the rest of the indifferently designed, unevenly performed show.

(9) REFILL. John King Tarpinian found an even better image of the Logan’s Rum reference on The Simpsons’ Treehouse of Horror episode. 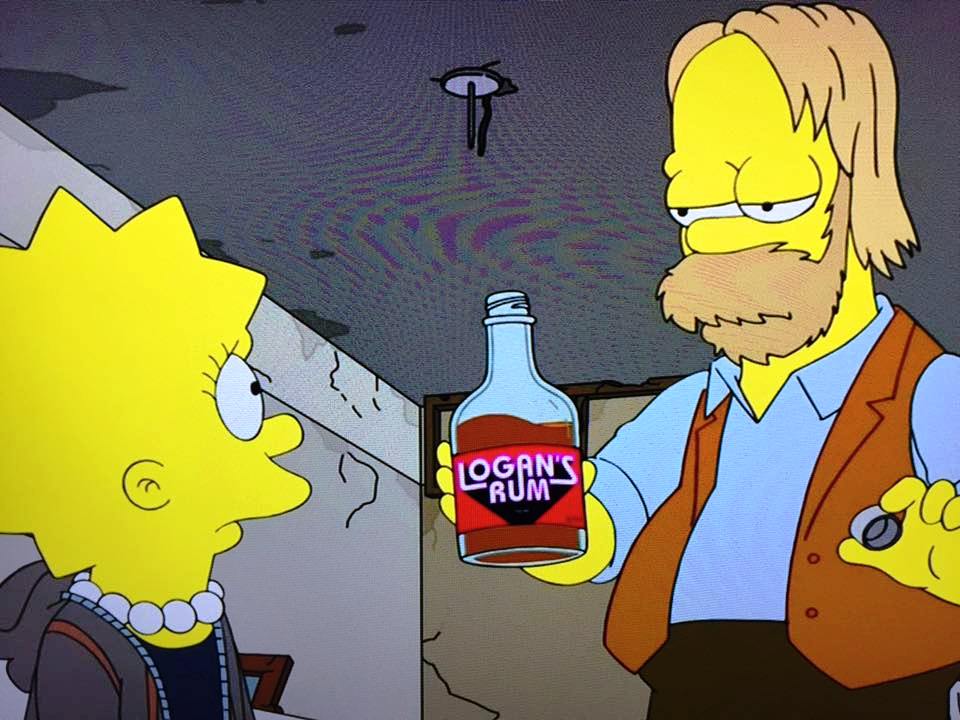 (10) RURITANIA MISUNDERSTOOD. Since Ian Sales reads this blog, wouldn’t it be more efficient for him to engage the commenters here and clarify the misunderstanding?

@fragmad @Paul_C_Smith @ApeInWinter it's not just File770 (which is basically LJ) or just Americans. Sadly.

"he seems to place primary value on development of big sciencey concepts". Show me where I said this in my piece. You are projecting.

@wa7trel it would also require them reading my post and understanding its argument. It's an LJ thing, and File770 is the new LJ

And spare my tender feelings, please – the new LJ, indeed!

Your work is typically labeled “speculative fiction” or “science fiction” or “fantasy,” in spite of your protests. How do you think the typical demarcations of “mainstream,” “literary,” and “speculative” fiction have evolved since you began writing?

I’ve never protested when my science fiction and fantasy is called science fiction and fantasy—why should I, when that’s what it is? But a lot of it isn’t, and I do protest having all my work lumped into a genre that only some of it belongs to. I’ve written for decades in various genres including realism, SF, fantasy, kiddilit, and fable. I published poetry long before I sold a story, and am still publishing it. I’m no longer writing fiction. I don’t fit into any pigeonhole. I’m all kinds of birds. The walls between fictional genres that were constructed by critical prejudice and ignorance are going down fast, and I love to watch them go! [That being said], genre is a permanently useful idea when used rightly, to indicate actual difference in subject-matter, style, expectation. It’s sort of like dogs, isn’t it? Your basic dog is a mongrel. No one breed is “superior” to all others, and exclusive inbreeding results in monsters. But variety and adaptability are valuable traits in a species, and there are real differences between breeds. Long live the Chihuahua, the Elkhound, the Poodle, and the Mutt.

(12) RESEARCH. Sarah A. Hoyt shares her strategy for “Making it Real – How To do Targeted Research” at Mad Genius Club.

Anyway, this is my method: if I am asked — as I was recently — to write something set in say the time of the revolution, the first thing I do is buy one or two general interest books, preferably ones well thought of.  Then I buy a biography or ten written by people of the time.  And then I outline the book and decide what targeted research I’ll need.  Will they sit down at table?  Will there be a tavern scene?  All of those have books written about them.  I find those and read them for the specific scenes I need.  At this time, too, to “soak in” the feel of things I start watching documentaries about that time and place.  This gives a “texture” to the book it would otherwise lack.

Of course, my books change as I write them, so sometimes I’ll find I have to write a scene that wasn’t in the outline, like horse shoeing or perhaps riding between two specific scenes.  At that time, I will put notes all over the book that say “look up x” — most people use something to bracket those, that isn’t used in normal writing, so that we can do a final look see and make sure we got them all.  I use curly brackets — and also, my monitor gets “porcupined” with sticky notes with things like “try to find book or website or reenactor who knows about x.” and “I’m almost sure the description of horse shoeing in the blah blah novel is wrong,” but it’s all I could find “so, replace it when you figure out the right one.” …

(13) NUMBER ONE. Castalia House again has topped an Amazon sales category with its latest release – a book that apparently was acquired at a bargain price:

Mike Cernovich’s new book, MAGA MINDSET: Making YOU and America Great Again, is the #1 bestseller in Amazon’s Politics & Social Sciences>Leadership category. That’s not surprising, as his prevous book, Gorilla Mindset, self-published in 2015, was also a bestseller

What is surprising, however, is that languishing behind the Donald Trump-supporting author’s latest bestseller is Stronger Together, a book published only last month, written by Democratic Party presidential candidate Hillary Clinton and her running mate, Sen. Tim Kaine. The Clinton-Kaine book, signed by Simon & Schuster to $14 million advance, currently sits at 5th place in the category…..

The new Cernovich bestseller, signed to an advance that was, according to Day, “pretty close to $14 million less than Clinton and Kaine got,”….

An important ingredient for pickled tea leaf salad. Which, incidentally, I am having for lunch today. pic.twitter.com/74ld0J37ow

(15) INTERNATIONAL MAN OF MYSTERY. Are people still trying to find out?

[Thanks to Bartimaeus, James Davis Nicoll, and John King Tarpinian for some of these stories. Title credit goes to File 770 contributing editor of the day Tom Becker.]