(1) CAN’T STOP LOOKING. CinemaBlend’s Gregory Wakeman waited to finish his post about this Jar Jar Binks movie poster before gouging out his eyes…

Pfft who am I kidding. Behold! The poster you've all been waiting for: The new and improved final #RogueOne poster! #TheBrotherhoodOfBinks pic.twitter.com/15O7RQWXxJ

(2) ADD THIS WORLDCON BID TO YOUR SCORECARD. Kevin Standlee reports that, at the request of this bid, he has added UK in 2024 to the Worldcon.org list of bids. The link is a Facebook page. Kevin notes, “They did say to me when they contacted worldcon.org that they plan to have an actual web site eventually as well, not just a Facebook page.”

(3) PREDICTING THE PRESENT. In “The Celebrity Campaign” on National Review Online, Kevin D. Williamson summarizes William Gibson’s Idoru and explains why Gibson’s work is important for understanding the vapid, celebrity-driven campaign we have this year.

Even though I finished work at 5.30AM in London on a mild autumnal Saturday morning, within a few hours I was in the Camden Court Hotel in Dublin’s city centre, amongst friends and fans at Octocon. The enthusiasm and excitement then carried me through until I hit the sheets at 4.30AM on Sunday morning, fed by the energy of the convention, dancing well past midnight and imbibing great cheer.

This year’s committee is youthful, bucking a trend with similar conventions in the UK, and possess a dynamism that brought together a nice programme, good fun social elements and of course overall a very enjoyable convention. The Guests of Honour, Diane Duaine and Peter Morward and Rhianna Pratchett, allowed much ground to be covered and attracted great audiences. With over two hundred people in attendance, the five-stream programme was busy.

tfw your kid's school makes you sign a permission slip so he can read Fahrenheit 451 ? ? pic.twitter.com/t9lmD8vKTu

I love this letter! What a wonderful way to introduce students to the theme of Fahrenheit 451 that books are so dangerous that the institutions of society — schools and parents — might be willing to team up against children to prevent them from reading one. It’s easy enough to read the book and say, ‘This is crazy. It could never really happen,’ but pretending to present students at the start with what seems like a totally reasonable ‘first step’ is a really immersive way to teach them how insidious censorship can be I’m sure that when the book club is over and the students realize the true intent of this letter they’ll be shocked at how many of them accepted it as an actual permission slip. In addition, Milo’s concern that allowing me to add this note will make him stand out as a troublemaker really brings home why most of the characters find it easier to accept the world they live in rather than challenge it. I assured him that his teacher would have his back.

(6) REMAINS OF THAT DAY. The demolition of Ray Bradbury’s house inspired Joshua Sky’s Omni story “The House Had Eyes”.

The exterior was yellow with a brown triangle thatched roof and a thin brick chimney. The windows had been destroyed—the frames, like the living room, were gutted. Their remains tossed into a large blue dumpster resting on a hillside covered in dying grass. All that was left were two large cragged square shaped holes that bore inward yet outward all at once. Inward, laid the wisps of soot polished ruin. Hardwood floors, a mantle, masonry, some shelves and dust. Outward—the structure telepathically transmuted its emotions of loss and sorrow. She knew she was dying.

I was transfixed, my eyeballs locked with the house’s. It was like something straight out of a Bradbury story! My hands tightly gripped the fence, chain-links dug into my finger tendons. Focused on the yellow lawn, my mind pictured a phantom montage of Bradbury, time-lapsed: Watering the grass. Reading on the steps. Puttering about. Stalking the sidewalks. Talking to the neighbors. Talking to himself. Writing. Staring at the sky. Staring at the stars. Staring beyond. Marveling in awe. Downright dreaming—of rockets and Martians and technicolored time travelers.

It all felt so cosmically unfair. Why’d they have to tear it down? Why’d they have to piss on a legacy? It felt like we were all losing something—even if we didn’t know it. That our country—the people—the vanishing literate—were losing not only a landmark, but a sense of our collective wonderment. That we were continuing a bad trend that had no hint of ending—swapping our heritage for a buck. That’s the American way some would say. Some—maybe—but not all.

(7) FROM VELOUR TO MONSTER MAROON. With Halloween just around the corner, Atlas Obscura offers guidance to cosplayers: “How to Read The Secret Language of Starfleet Uniforms”.

It’s Halloween time again, and as it has been for the past 50 years, a Star Trek costume is a safe bet for anyone looking to dress up. But do you want to be a Starfleet captain in 2268? A ship’s doctor in 2368? For the uninitiated, deciphering the language of colors and symbols that place you in the show’s universe is a crapshoot.

Luckily, Atlas Obscura is here to help, with a bit of cosplay codebreaking….

The most recent Star Trek television series, 2001’s Enterprise, was actually a prequel, taking place in the mid-2100s, and strangely, their uniforms take cues from every era of the Star Trek franchise. Taking place prior to the formation of the Federation Starfleet seen in later incarnations, the uniforms of the very first space-faring Enterprise, were once again standardized into a purple workman’s jumpsuit (echoing the red-washed uniforms of the later Original Series films). Position on the ship could be determined by the color of a seam that ran along the shoulder of the jumpsuit, with the colors corresponding to the original command gold, science blue-green, and operations red.

And then rank was indicated by the number of silver bars over the right breast, just like the pips used in The Next Generation. While not everyone’s favorite, this suit kind of had it all.

John Langan is author of two novels, The Fisherman and House of Windows.  He’s also published two collections, The Wide Carnivorous Sky and Other Monstrous Geographies and Mr. Gaunt and Other Uneasy Encounters.  With Paul Tremblay, he co-edited Creatures:  Thirty Years of Monsters.  He is one of the founders of the Shirley Jackson Awards and he currently reviews horror and dark fantasy for Locus magazine.

New and forthcoming are stories in Children of Lovecraft, The Madness of Dr. Caligari, The Mammoth Book of Cthulhu, Swords v. Cthulhu, and Children of Gla’aki.  In February of 2017, his third collection of stories, Sefira and Other Betrayals, will be published by Hippocampus Press.

John Langan lives in New York’s Hudson Valley and teaches classes in creative writing and Gothic literature at SUNY New Paltz.  With his younger son, he’s studying for his black belt in Tang Soo Do.

Matthew Kressel is the author of the novels King of Shards and the forthcoming Queen of Static. His short fiction has been twice nominated for a Nebula Award and has or will soon appear in such markets as Lightspeed, Nightmare, Tor.com, Clarkesworld, Beneath Ceaseless Skies, io9.com, Apex Magazine, Interzone, and the anthologies Cyber World, After, Naked City, The People of the Book.

From 2003-2010 he published and edited Sybil’s Garage, an acclaimed SF magazine. He also published the World Fantasy Award-winning anthology Paper Cities and for his publishing work, received a World Fantasy Award nomination for Special Award Non-Professional. He co-hosts the Fantastic Fiction at KGB reading series alongside Ellen Datlow. When not writing fiction he codes software for companies large and small, studies Yiddish (Nu?), and recites Blade Runner in its entirety from memory.

(9) NEW SF BOARD GAMES. In a piece on arstechnica.com called “Essen 2016: Best board games from the biggest board game convention”, Tom Mendlesohn reports from the International Spieltage convention in Germany, where most of the new board games have sf/fantasy content. 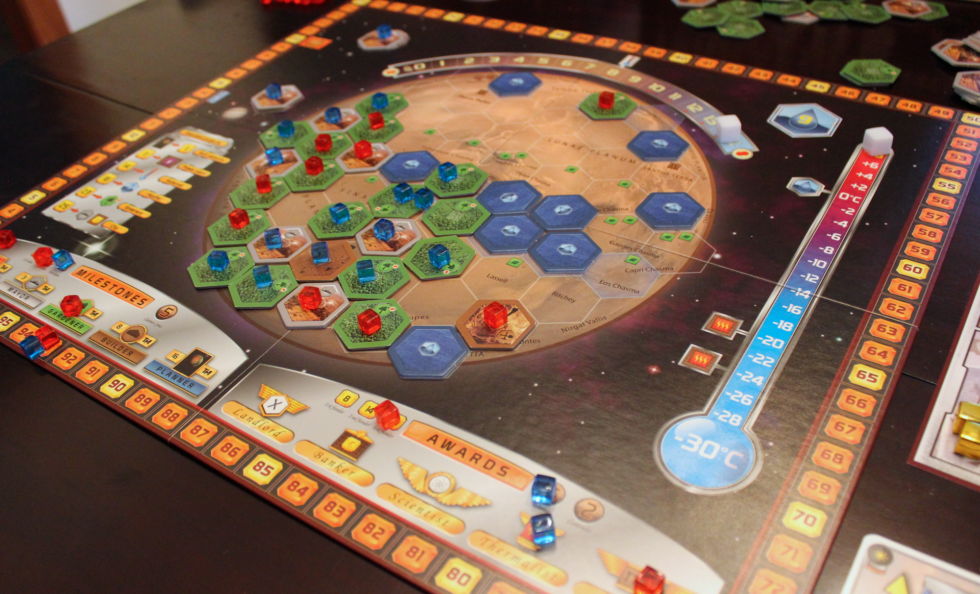 One of the most buzzworthy releases of the whole show, this title sold out by 3pm on the first day—a whole hour before Ars even arrived. The one table that FryxGames ran with a playable copy was booked every day. Fortunately, Ars US staffers already got their grubby little hands on the title and gave it a thorough—and hugely positive—review.

You’re playing as a futuristic global megacorp attempting, as the title suggests, to terraform Mars. Your tools are lots of plastic cubes, which track your resources and which are traded to in for asset cards, which get you more cubes. (The game is a total engine-builder.) Though the art isn’t terribly exciting, this is a terrific thinky Eurogame of interlocking systems and finding the most efficient ways to exchange one set of numbers for a higher set of numbers.

(10) HE MADE IT SO. In a piece in the San Francisco Chronicle by Mike Moffitt called “The Real James T. Kirk Built the Bridge of the Enterprise – In the Sunset District” profiles a guy named James Theodore Kirk, who was born a month before Star Trek went on the air and who built a replica of the Enterprise in his house.  He also is a Trekker who once won a chance to meet William Shatner, but he was dressed as the villianous reptile Gorn and wouldn’t tell Shatner his name really was James T. Kirk.

Captain’s log, Stardate 21153.7: After straying into a wormhole, the Enterprise has somehow crash-landed on Earth in early 21st-century San Francisco. We are attempting to effect repairs from a location in the city’s Sunset District.

James T. Kirk commands the Starship Enterprise from the captain’s chair of the ship’s bridge, conveniently located in the back of his house in San Francisco’s Outer Sunset.

The bridge is equipped with a wall of computers blinking with colorful lights, a transporter room and the main viewer, which would toggle to show flickering stars, sensor data or the occasional Romulan or Klingon message demanding the Enterprise’s immediate withdrawal from the Neutral Zone.

There is even an “elevator” in the back that makes a “whoosh” just like the one on the classic 1960s show “Star Trek.” Of course, the bridge is not an exact duplicate of the show’s — it’s a smaller area, so the key fixtures are a bit crammed and the helmsmen seats are missing altogether. But the overall impression is clearly Mid-century Modern Starship.

(11) KUTTNER. You can find Stephen Haffner hawking his wares this weekend at World Fantasy Con. Or you can order online today!

Haffner Press does it again! In 2012 we included a newly discovered Henry Kuttner story—”The Interplanetary Limited”—in THUNDER IN THE VOID. Now, with the upcoming release of THE WATCHER AT THE DOOR: THE EARLY KUTTNER, VOLUME TWO, we are pleased as pandas (!) to announce we have discovered ANOTHER unpublished Henry Kuttner story!

MAN’S CONQUEST OF SPACE or UPSIDE-DOWN IN TIME is an early gag-story (featuring pandas) supposedly written for the fanzines of the 1930s. It likely predates Kuttner’s first professional sale in 1936. “And how can I get a copy?” you ask? Well, we made it simple. So simple that it’s FREE* if you place (or have already placed!) a PAID preorder for THE WATCHER AT THE DOOR: THE EARLY KUTTNER, VOLUME TWO. We’re printing a limited quantity of this new Kuttner story, so Do. Not. Delay.

A weathered Sheriff returns to the remains of an accident he has spent a lifetime trying to forget. With each step forward, the memories come flooding back. Faced with his mistake once again, he must find the strength to carry on.

[Thanks to Hampus Eckerman, John King Tarpinian, and Martin Morse Wooster for some of these stories. Title credit goes to File 770 contributing editor of the day Niall McAuley.]