Despite how much I admire what Neil has managed to do over the course of nine years with Clarkesworld, I think his take on the current and developing situation in the genre short fiction market comes from a decidedly glass-half-empty point of view.

I have to be up-front about my reaction to reading that editorial.  My initial summation of the points Neil makes is:  the market is contracting, those of us who have managed to get somewhere need all the help we can get, so please, don’t try to start a new short fiction magazine.

Were it not for the completion of our first writing contest (for which we offered the minimum professional payment), I’d have been able to largely dismiss the doom and gloom, but the fact that Amazing Stories is now firmly on the path to becoming a regular paying market makes me feel as if I and Amazing Stories are part of the “problem” Neil was addressing.

Dear @jk_rowling: Ron is a time-traveling Dumbledore — fact or theory?

@jk_rowling There's. Another theory that Draco Malfoy is a werewolf fact or fiction?

I've never seen that one before. Draco definitely isn't a werewolf (and Snape's not a vampire). https://t.co/TSliADJvyi

(3) The Martian is making a killing at the box office.

Late night receipts showed 20th Century Fox’s The Martian grossing an estimated $56M over three days, putting it on course to be the highest opening film ever in October. However, this morning, some bean counters are scaling back those projections. 20th Century Fox is calling the weekend for the Ridley Scott film at $55M, while others see it busting past the $55.8M made by Warner Bros.’ Gravity two years ago. As the old line goes: It all boils down to Sunday’s hold. Currently, Martian is the second best debut for October, Scott, and Matt Damon.

(4) Abigail Nussbaum commented on The Martian.

When coming to write about The Martian, Ridley Scott’s space/disaster/survival movie about an astronaut stranded on Mars, it’s hard to resist the impulse to draw comparisons.  The Martian is perhaps best-described as a cross between Alfonso Cuarón’s Gravity and Robert Zemeckis’s Cast Away.  Its focus on the engineering challenges that survival on Mars poses for hero Mark Watney, and on the equally thorny problem of retrieving him before his meager food supply runs out, is reminiscent of Ron Howard’s Apollo 13.  The fact that Watney is played by Matt Damon (and that the commander of his Mars mission is played by Jessica Chastain) immediately brings to mind Christopher Nolan’s Interstellar.  The problem with all these comparisons is not so much that they show up The Martian‘s flaws, as that they throw into sharper relief the very narrow limits of what it’s trying to be.

(5) Gary Westfahl gushed about the Martian in “’A Huge Moment for NASA’ … and Novelists: A Review of The Martian“ at Locus Online.

Let me immediately say that Ridley Scott’s The Martian is the best film I’ve seen in a long, long time, and it can be enthusiastically recommended as involving and uplifting entertainment.

(6) Frank Ochieng’s review of The Martian is posted at SF Crowsnest.

As with other Scott-helmed productions, ‘The Martian’ settles nicely in its majestic scope that taps into visual wonderment, humanistic curiosities, technical impishness and the surreal spryness of the SF experience.

(7) “’The Martian’ Author Andy Weir Asks: Why Send Humans to Mars?” at Omnivoracious.

Robots don’t need life support during their trip to the Red Planet, and they don’t need to return at all. They don’t need abort options. If there’s a mission failure, all we lose is money and effort, not human life. So why would we go to the extra hassle, expense, and risk of sending humans to do a robot’s job?

Because scientific study is not the end goal. It’s one step along a path that ends with human colonization of Mars.

(8) And exploring Pluto is proving to be profitable for New Horizons’ lead scientist.

Alan Stern, principal investigator of the New Horizons mission, has a deal with Picador for a “behind the scenes” account of July’s flyby.

The publisher announced Thursday that the book is called “Chasing New Horizons: Inside Humankind’s First Mission to Pluto.” It’s scheduled for publication in spring 2017. David Grinspoon, a planetary scientist and award-winning science writer, will co-write the book.

(9) Did someone say, “Don’t you think he looks tired?” There are rumors Doctor Who is facing cancellation.

The alleged BBC insider said that “drastic action may be needed” to correct the falling figures. Although a spin-off series has just been announced targeted towards teenagers, the unnamed source said that Doctor Who’s falling ratings are worrying. “At this stage all options are being ­considered,” explained the source.

(10) But before he goes, the sonic screwdriver may be back —

Doctor Who’s Peter Capaldi has been sans Sonic Screwdriver since he threw Davros a bone in the two-part series 9 opener but will the iconic Who accessory be making a comeback?

Speaking in a video for Doctor Who’s official YouTube channel, Moffat hinted that we might not have seen the last of Twelve’s trusty tool. “I’m sure the screwdriver will show up again some day” he teased.

(11) Short review of “City of Ash” by Paolo Baciagalupi on Rocket Stack Rank.

In a near-future, water-starved Phoenix, AZ, Maria hides from the smoke of distant forest fires and thinks about everything that went wrong.

(12) “A Sunday Review” by Laura “Tegan” Gjovaag at Bloggity-Blog-Blog-Blog.

The Philosopher Kings by Jo Walton. First up: the completely non-spoiler review. Starting almost 20 years after an infamous debate ended the experimental Just City (an attempt to create Plato’s Republic in the distant past), this book shows how the fractured populace gets on without help from Athena and the robot workers she provided. This book is not nearly as unsettling as the first in some ways, but in other ways… whew. It’s a wild ride.

Much more follows in Rot13.

(13) Nick Mamatas reviews A Country of Ghosts by Margaret Killjoy on Bull Spec.

Subtitled a book of The Anarchist Imagination, Margaret Killjoy’s A Country of Ghosts is more appropriately a work of anarchist speculation. Structurally a Utopian novel—someone from a society very similar to the statist systems we’re all familiar with travels to a Utopia and is told how things work—we can count this book as a “hard” utopia. There’s no quantum computing or frictionless engine that makes the economy go, and the people living in the anarchist confederation of Hron have found themselves in the crosshairs of the Borolian Empire.

Larkin Jones is a hardcore Pokemon fan who loses money every year on his annual Pokemon PAX party; he makes up the shortfall from his wages managing a cafe. This year, Pokémon Company International sued him and told him that even though he’d cancelled this year’s party, they’d take everything he had unless he paid them $5,400 in a lump sum (they wouldn’t let him pay it in installments).

Jones charges $2 a head to come to his party, and spends the $500 he grosses from tickets on a DJ, gift cards, decorations, cash prizes, and a Kindle Fire door-prize. He’s lost money on the party every year since he started throwing them in 2011.

He took up a collection on GoFundMe to pay the shakedown:

The day before the PAX party, Pokemon sued me. Without even a  cease and desist.Totally didn’t expect that. I cancelled the party, refunded everyone the 2 dollars I charged to help cover all the prizes I bought for the cosplay contest and smash bros tournament. Pokemon wants $4000 that I just don’t have. I told them I would pay it over a year and they denied that. They want it now with in the next 45 days.

There are few things as fascinating as seeing what people in the past dreamed about the future.

“France in the Year 2000” is one example. The series of paintings, made by Jean-Marc Côté and other French artists in 1899, 1900, 1901 and 1910, shows artist depictions of what life might look like in the year 2000. The first series of images were printed and enclosed in cigarette and cigar boxes around the time of the 1900 World Exhibition in Paris, according to the Public Domain Review, then later turned into postcards. 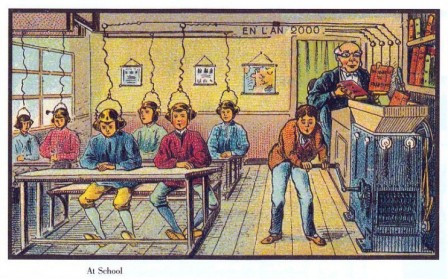 (18) Late night TV guests of interest to fans this week.

[Thanks to SF Signal, Rogers Cadenhead, John King Tarpinian for some of these stories. Title credit belongs to File 770 contributing editor of the day IanP.]

92 thoughts on “Pixel Scroll 10/4 Second pixel to the right, and straight on ’til scrolling”