(1) PETER BEAGLE’S UNICORN. The Atlantic celebrates 50 years in print for The Last Unicorn, “One of the Best Fantasy Novels Ever Is Nothing Like The Lord of the Rings“.

Beagle frequently subverts fantasy tropes. Prince Lir tries to win the unicorn’s heart by deeds of derring-do, but she is unimpressed. In fact, Lir does not end up with the unicorn. And in the novel, mortality is preferable to immortality; Haggard, who quests after immortality, is defeated. Schmendrick’s greatest wish is to end the curse of immortality placed on him by his mentor. The unicorn, in a brief brush with mortality, gains the ability to regret, and she is better off for it. In The Last Unicorn, it’s the earthly things, the things that make one human, that are the things worth having.

(2) KOBE’S HOLLYWOOD. In “The Revisionist”, the Washington Post’s Kent Babb reports that Kobe Bryant is hiring a staff to develop his fantasy world, known as “Granity.”  A podcast about the fantasy world, “The Punies,” currently exists and YA novels and an animated series are in development.

In Bryant’s office, “affixed to panels are renderings of maps and terms from ‘Granity,’ Bryant’s imaginary world that’s not unlike the Marvel Universe or George R.R. Martin’s Westeros.  There are sketches and meticulously designed artifacts that seem to make sense only in Bryant’s mind:gods of emotions, stories that blend fantasy and sports, that eternal battle not between good and evil but between love and fear.”

Also, “inside the safe in the closet (in his house) are his three most prized possessions:  a first-edition Harry Potter signed by J.K. Rowling, a series of autographed books by George R.R. Martin, the ‘Dear Basketball’ score signed by John Williams.”

“If you look at all the potential stories — how the home is constructed, the family that lives there — there are infinite possibilities,” he says, and the notion struck him so profoundly, so personally, that in that moment he began imagining a fictional world in which his ideas could take shape. He would call that world “Granity,” and existing there would be characters who — like some of Bryant’s favorites: Darth Vader, Severus Snape, Jaime Lannister — are horrifying at times, charming at others.

As this flight begins its descent, he suggests no compelling character is entirely good or bad; that a storyteller’s duty is to draw out the full story and take every belief, emotion and motivation into account.

“You have things within you that are festering,” he says. “We all do.”

(3) MORE OLD PEOPLE. James Davis Nicoll turns the geezer panel loose on “The Limitless Perspective of Master Peek, or, the Luminescence of Debauchery by Catherynne M. Valente”. Can they dig it?

And so we reach the end of the first half of this project with The Limitless Perspective of Master Peek, or, the Luminescence of Debauchery by Catherynne M. Valente. First published in issue #200 of Beneath Ceaseless Skies, Master Peek was a finalist for the 2017 Eugie Foster Memorial Award. This, in fact, is why I selected it. But will my readers agree with the taste of the Foster jury?

The Limitless Perspective of Master Peek, or, the Luminescence of Debauchery can be read here.

(4) THE FUTURE KING IN YELLOW. In “Some Achieve Greatness” at Doctor Strangemind, Kim Huett revisits the youth of a well-known sff author. Can you guess who it is before he tells you?

Let me quote from a speech made at the 1983 Disclave by one of the authors attending that con (for the record the text of this speech was reprinted in Bill Bower’s fanzine, Outworlds #34). Our mystery author begins thus:

Maybe a few of you were here in ’71 too. If so, maybe you remember me. I looked a little different back then. My hair was shoulder length, just like everyone else’s, but I was still clean-shaven, I didn’t stop shaving until 1974. Even then, I was a snappy dresser. In fact, I was a hell of a lot snappier. As I recall, I wore my Psychedelic Hippie Pimp outfit to the con: ankle boots with zippers, burgundy bell-bottoms, a bright solid green tapered body shirt, a black satin scarf, and — the piece de resistance — my famous double-breasted pin-striped mustard-yellow sports jacket. Perhaps now you veterans recall me. I was the one wandering around the con suite doing permanent retinal damage

Farewell, planet hunter. Last night, the @NASAKepler space telescope received its final set of commands to disconnect communications with Earth. The “goodnight” commands were sent on the anniversary of the death of the mission’s namesake, Johannes Kepler: https://t.co/dhUCmKmvqW pic.twitter.com/TKkSk0EQ7C

(6) FLOGGING IT TO THE FINISH LINE. There’s a theory that “George R.R. Martin Is Now ‘In Hiding’ To Finish ‘Winds Of Winter’”.

The Winds of Winter has turned into a real pickle — an ambitious monster that he says is “not so much a novel as a dozen novels, each with a different protagonist, each having a different cast of supporting players, antagonists, allies and lovers around them, and all of these weaving together against the march of time in an extremely complex fashion. So it’s very, very challenging.”

But he’s really hunkering down now, and that fact should chill his legions of impatient fans. After all, he’s said that he finished A Dance with Dragons by disappearing “in a bunker,” so this may simply be business as usual.

(7) JUST LIKE THE HUGOS. [Item by Mike Kennedy.] In something of a first, ranked choice voting (which should be familiar to Hugo voters) has made a difference in a US House election. (CNN: “Democrats flip another House seat after ranked-choice runoff in Maine”). Current Representative Bruce Poliquin received a small plurality over challenger Jared Golden in Maine’s 2nd District—46.2% to 45.6%, with the remaining 8.2% split between two other candidates.

However, since no candidate had achieved a majority, Maine’s new ranked choice voting system kicked in. After progressively eliminating the fourth and third place candidates and redistributing their votes to each voter’s second choices, Golden pulled ahead and ended up winning by about one percentage point (50.5% to 49.5%).

Poliquin had sought a temporary restraining order to prevent counting the ranked-choice votes, calling into question the constitutionality of this sort of voting system. The process was put in place in Maine when voters approved a referendum in 2016, and this appears to be its first big test. Poliquin has pledged to continue his legal challenge of the constitutionality of ranked choice voting.

(9) WORDS MATTER. Never thought of it that way.

I mean, credit to Doctor Doom, FOOLS is a gender neutral way to address an entire room.

— Max the comics guy who does comics about comics (@amadcartoonist) November 17, 2018

(10) UNDERSTANDING CAMPBELL. It’s the LA Times’ turn to review Astounding: John W. Campbell, Isaac Asimov, Robert A. Heinlein, L. Ron Hubbard, and the Golden Age of Science Fiction by Alec Nevala-Lee. Scott Bradfield does the honors in “John W. Campbell, a chief architect of science fiction’s Golden Age, was as brilliant as he was problematic”.

These stories were written, or published and conceived into existence, by the undoubtedly great and incomprehensibly peculiar John W. Campbell Jr., who single-handedly designed many of the ways we saw the future then and continue to see it now. Born in Newark, N.J., in 1910, he was raised by combative parents who embodied the extremes of their son’s divided personality: his father, an engineer with Bell Telephone, stressed rationality, planning and control over emotions, while his mother was a wild, tantrum-prone woman who couldn’t be controlled so much as fought “to a draw.” After their divorce, Campbell grew up, like many writers, unhappy, lonely and distressed; he often felt like a disappointment to his father, and his mother’s unpredictable cruelties instilled in him a deep sense of panic about a world that couldn’t be adequately rationalized or controlled.

…Despite an aimless early life, Campbell eventually stumbled onto the job he was born to do — long before anybody realized it was a job worth doing. Until Campbell came along, the pulps were edited by company men who felt little if any personal affection for the stories they published. But in 1937, when Campbell accepted the editor’s chair at Astounding Stories (which he quickly renamed Astounding Science Fiction), he became the first SF fan to shape the genre he loved; and almost immediately he discovered that exploring futuristic ideas for his stories was not nearly so pleasurable as passing those ideas onto others. “When I was a writer,” he told his youthful discovery, Isaac Asimov, “I could only write one story at a time. Now I can write fifty stories at a time.”

(11) ORIGIN EPISODES AVAILABLE. YouTube’s Origin follows a group of passengers lost in space— each of them desperate to escape their past. In the first episode —

The passengers wake up on board the Origin, abandoned in space. They search for other survivors, but find something else entirely.

In the second episode —

A tense showdown prompts a difficult decision. Shun and Lana realise that the threat could be nearer than any of them thought.

(12) IT’S BEGINNING TO LOOK A LOT LIKE CHRISTMAS. Some sff goodies available now on eBay –

(13) BIG-TICKET ITEM. Or you may need to save your spare change for this iconic outfit: “Skimpy Star Trek costume worn by Captain James T. Kirk for the first inter-racial kiss on TV is set to sell for £46k”.

A Star Trek costume worn by captain James T. Kirk for the first inter-racial kiss on TV goes under the hammer with an estimate of £46,000 in California next month. 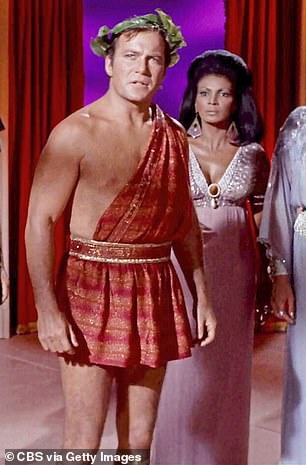 (14) FROZEN GAME ON THE HORIZON. “Disney deepens its footprint in mobile gaming, teams up with game publisher Jam City” – CNBC has the story.

Under the terms of a deal announced last week, Jam City will be taking over the Glendale, California-based mobile game studio in charge of Disney’s “Emoji Blitz” – a hugely popular mobile game Disney released in July 2016.

The deal also means that Jam City now holds the rights to develop new games based on elements from Disney’s Pixar and Walt Disney Animation Studio brands. The first planned collaboration between the two companies is expected to be a game based on Disney’s “Frozen” sequel.

(15) BORN UNDER LEO. Low Earth Orbit could be about to get a lot more crowded. SpaceX has an ambitious plan to put a very large constellation of LEO satellites to handle internet traffic. They’d already gotten approval to emplace thousands of them, and have recently gotten FCC approval for the remainder (The Verge: “FCC approves SpaceX’s plan to launch more than 7,000 internet-beaming satellites”). Several hurdles remain, of course.

The Federal Communications Commission has approved SpaceX’s request to launch a constellation of 7,518 satellites into orbit, a major regulatory hurdle the company needed to clear in its plans to provide internet coverage from space. The approval is in addition to one that SpaceX received from the FCC in March for a constellation of 4,425 satellites. That means the company now has permission to launch its full satellite internet constellation called Starlink, which adds up to nearly 12,000 spacecraft.

[…] SpaceX’s approvals are conditional, though. In order to bring each mega-constellation into full use, the company needs to launch half of the satellites within the next six years. That means the clock is ticking to get nearly 6,000 satellites into orbit by 2024. SpaceX says it will launch its first batch of Starlink satellites in 2019.

So far, SpaceX has only launched two test satellites for the constellation — TinTin A and B. […]

(16) THINK OF THE CHILDREN. Saturday Night Live proves you can hear laughter in space.