(1) SCIENCE FICTION HALL OF FAME. Last spring the EMP Museum opened public voting on the 2016 finalists for the Science Fiction and Fantasy Hall of Fame.

In honor of the Science Fiction and Fantasy Hall of Fame’s 20th anniversary, we invited the public to submit their favorite Creators and Creations. After tallying up your nominations (nearly 2,000 submissions!), a committee of industry experts narrowed down the list to the final twenty nominees.

After waiting some months for further news, I contacted the EMP Museum and received this answer:

Announcement of the new inductees is tentatively planned for Spring 2017, with a more exact date to be announced later this month.

Annoyed that I can't think of a better way to say "smacktastic" in an NYT review. ::erases sentence, sighs::

(3) CELEBRITIES SAVING THE WORLD ON THEIR DAY OFF. Pretty damn funny. “Rachel Bloom, Elizabeth Banks Sing Their Support for Hillary in Profanity-Filled Funny or Die Video”.

Elizabeth Banks, Jane Lynch, Adam Scott, Mayim Bialik, Jesse Tyler Ferguson and Rachel Bloom were among the celebrities who gathered together with the help of Funny or Die to plead with voters to choose Hillary Clinton as the next president.

In an anti-Trump music video posted Friday, veteran Broadway star Patti LuPone and musician Moby are also seen belting out lyrics (with more than a handful of curse words) urging people to hit the polls.

(4) TWICE FIVE. On the eve of the election, Emily Temple offers 10 literary apocalypses from books published in the last five years.

The apocalypses in this book—most just a few lines long, because sometimes that’s all it takes for the apocalypse, some a paragraph or more—are not necessarily global. They can be the end of a relationship, or a moment, or an idea, because any of these can feel like cosmic destruction. None of these apocalypses are likely to caused by Hillary Clinton or Donald Trump, but they do serve as a reminder of what havoc we can wreak on ourselves.

(5) RAISING KIDS’ INTEREST IN ASTROPHYSICS. Hungarian illustrator Róbert Farkas wants to publish a trilogy that will attract kids to astrophysics. He’s raising money on Indiegogo to foot the bill. 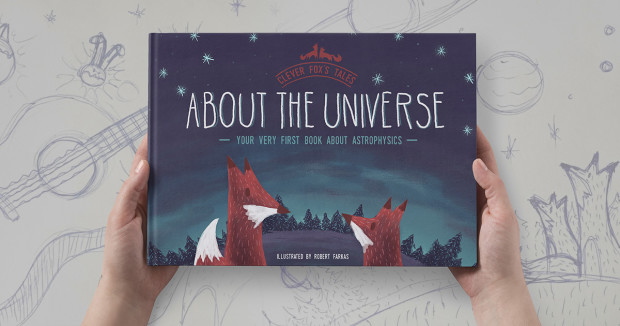 Clever Fox’s Tales about the Universe

’Daddy, what are those million shiny spots up in the black sky?’ This is the question I want to be able to answer by the time my daughter will ask it. I invite you to help me answer this same question for hundreds, hopefully thousands of other kids all around the world.

My name is Róbert Farkas, I am a freelance illustrator and animator. I live in Europe in Hungary with my family. Aside from drawing I like to read books about astrophysics in my free time, which influenced me in creating this trilogy.

The first book is about the Big bang and particle physics, no joking! The second part takes us to the middle of the solar system, explains about core fusion, vacuum and what lies in the middle of a black hole. The third is a leap into quantum physics, with a taste of the speed of light, gravitational lens effect and dark matter.

(6) NEW TERM BEGINS. Camestros Felapton takes in the opening stanzas of the latest Doctor Who spinoff in “Review: Class (episodes 1 & 2)”.

To this end (do a Buffy revival because the late 90’s/early 2000’s are due for a revival) the show just really needs permission to be strange and for viewers to suspend disbelief. Hence the Doctor Who connection – it is British and it is weird and hence it needs a blessing from the Pontiff of British weirdness.

(7) WHY DIDN’T I THINK OF THAT? James Davis Nicoll has an “Idea for a movie”.

Unable to surmount a career-ending injury, a Taoist sorcerer moves from Hong Kong to Boston, where he masters engineering in six weeks.

Here’s what happened: Last year I wrote a novel called CTRL Alt Revolt! Fun little gamer novel, what some call LitRPG (Kinda like Ready Player One) My publisher (Harper Collins) was so offended by the fact that I showed an Artificial Intelligence being horrified by the callous act of murder we as a society call Abortion (It’s just a minor plot point in the book I used to give the Antagonist, a new born A.I. a good reason to fear for its life before it nuked the world) that they fired me. So I pub’d it as an Indie.

I awaited the storm of self-righteous indignation from my peers within the community at large. I considered a career change.

Well, some scorn from the usual scolds but they’re boring and tired. Ask anyone.

Instead I sold a ton of copies. Won a major Science Fiction Award and significantly increased my reader base, as a whole community of angry fans and readers who are just plain tired and bored with agenda-driven message fiction swarmed Amazon and bought my book in droves. And here’s a stunner: They don’t even believe in what I believe. Some disagreed with me openly. Even super hardcore leftist socialists bought it, read it, and had a good time despite disagreeing with a few points. See, they’re smart people who can read something and think for themselves instead of needing a sermon via Slate, Salon, Wired, or whatever other entertainment the Radical Left is propping up these days, and still continue holding on to their beliefs. While having a good time. These are people who aren’t worried about being triggered by an image of a guy in a superhero costume. Or that Ghostbusters might give them PTSD. These are people who hate that “the right people” are playing games with what people get to write. These are the real free thinkers! They hate that PC ideas are taking the place of story and good old fashioned fun. They hate the scolds.

(John King Tarpinian reminds everyone, “The palm trees at the end inspired the logo for In-N-Out Burger.”)

(10) A VISIT FROM THE SUCK FAIRY. In the Washington Post, Stephanie Merry talks about Quantum Leap and how she enjoyed the show a great deal as a teenager but finds it boring and dated now on rewatching — “Is it better to leave our favorite childhood shows and movies in the past?”

Sam, played by Scott Bakula, was an earnest everyman, not to mention a brilliant physicist, and he was trapped in a time-travel loop. Each episode, he teleported to a different era and inhabited a stranger’s body to alter history for the better. All the while, he kept hoping the next leap would bring him home.

I wasn’t a science fiction fan, but the show won me over anyway. Every adventure was so singular, and the series was remarkably progressive. Sam became a leggy blonde in the 1960s dealing with sexual harassment and a black man fighting discrimination in 1955, but also an unenthusiastic Ku Klux Klan member from Alabama. At one point he landed in the body of Lee Harvey Oswald.

(11) SUBMISSIONS OPENING AND CLOSING. The SFWA Markert Report for November is online, compiled by David Steffen.

She began publishing later in life (her first novel at age 54), and wrote more than forty under several pseudonyms. But she used her own name for the works that made her a fixture in science fiction and fantasy. Her most influential works straddle lines between her forebears and her peers; she sits among Margaret Atwood and Marge Piercy’s second-wave-feminist parables, and somewhere alongside the all-out otherworlds of Frank Herbert and Jack Vance.

Perhaps her most infamous book is 1988’s The Gate to Women’s Country, in which enclaves of women run society, relegating men to hyper-masculine garrisons, sending them off to war to thin the numbers, and trying eugenics to solve the problem of men. 1991’s Beauty is a retelling of the Sleeping Beauty myth — a stew of fairy tales Tepper chews up and spits out, with a little time travel in case you wondered what’s in store for the natural world. (Nothing good.) And 1989’s Grass — the first in a trilogy, and perhaps her most famous work — circled questions of faith, ecology, class, and the ways nature gets classified as monstrous when people are the invaders.

(14) IN THE BAY AREA Remember when people banded together to save Borderlands Books? It really looks worth it when you see a list of forthcoming author events like these:

* Richard Lupoff, WHERE MEMORY HIDES: A WRITER’S LIFE (Bold Venture Press, Trade Paperback (B&W Edition, $22.95), Trade Paperback (Collector’s Color Edition, $49.95) on Sunday, November 20th at 3:00pm. Local legend Richard Lupoff will show off his autobiography. From the book: “In half a century of publishing books and short fiction under his own name and at least six pen names, Richard A. Lupoff has spun some of the strangest fables, written a respected biography of Edgar Rice Burroughs, won a Hugo and has been nominated for multiple Nebula Awards.”  Dick Lupoff is a treasure trove of stories, both fictional and not.

(15) THE MONEY KEEPS ON ROLLING IN. At Kickstarter. The Harlan Ellison Books Preservation Project, “to create definitive versions of all Harlan Ellison’s writings, fiction and non-fiction, to preserve in print for posterity,” is almost 40% funded with 23 days to go.

[Thanks to John King Tarpinian, Andrew Porter, Martin Morse Wooster, Cora, Bence Pinter, and Rob Thornton for some of these stories. Title credit goes to File 770 contributing editor of the day JJ.]