(1) PROMETHEUS AWARDS RECOMMENDATIONS. Members of the Libertarian Futurist Society can formally nominate a work for any category of the Prometheus Awards.

Here are the works nominated so far in 2016 for the Prometheus Award for Best Novel:

Diamond Dogs follows a 26th century team of humans and transhumans as they investigate a mysterious alien tower, bent on brutally punishing all intruders. Uncovering clues and solving puzzles, each crusader will make dangerous, eye-popping sacrifices to get to the mysteries atop the spire. Blood will spill. This thriller is one of 16 stories set in novelist Reynolds’s expansive Revelation Space Universe. Artistic Director Nathan Allen teams up with The House’s most inventive designers and guest artists to bring this unique universe to life. Body modification is the norm in the future, and award-winning puppet designer Mary Robinette Kowal, who is also an award-winning sci-fi author, articulates and re-shapes the actors’ human forms into powerful mechanized players battling for their lives. Reynolds is one of a new generation of hard science-fiction authors, a craft he began during his decade-long career as an astrophysicist with the European Space Agency. Diamond Dogs is a pure example of the “Deadly Maze Story,” a staple of Science Fiction since H. P. Lovecraft. This world premiere production at The House Theatre of Chicago marks the first of Reynolds’ works to be adapted for another medium.

JS: What other elements are important in a new writer? Is it attitude, is it talent? What’s your take on that?

MR: First, you’ve got to be a smooth enough writer so that it’s not an effort for the editor, or the reader to get to the bottom of each page. That’s essential. You’ve got to know how to push a noun up against a verb with some grace. And of course you should have a knowledge of the field, because while there’s still a million ideas we haven’t touched, there’s probably half a million ideas that have already seen print. And unless you have a totally new take on it you’re not going to sell it. There used to be a rejection slip from Amazing Stories, back when Ted White was editing it, where there’d be a number of boxes he could check to explain why he’d rejected it. The box he checked most was, “Heinlein did it better – and earlier.”

I would love to have a rejection slip like that, but all Galaxy’s Edge’s rejections are personal. But yeah, you’ve got to know the field if you want to write in it. Which makes sense. I mean, shouldn’t you care enough about the field in which you want to make all or part of your living so that you’ve been reading it and know about it, and know what has been done to death and what hasn’t?

A local theatrical organization has ongoing communications challenges. The current means of communication (email, facebook, facebook messages) all seem to lend themselves to communications breakdowns [1]. I recall that Basecamp worked pretty well for the Tiptrees but Hipchat, Slack and Telegram have also been suggested as well. I know a bunch of you run cons. Would you recommend any of these tools?

[1] Facebook lends itself to amnesia but even in email it can be hard to find the specific email you want, particularly if you’ve forgotten it exists. Or never knew.

Tonight on Me-TV, during his presentation of Hammer’s 1960 classic THE BRIDES OF DRACULA, Svengoolie (AKA Rich Koz) made a VERY nice mention of Bill Warren‘s passing. He showed the photo of Bill with Robby the Robot and Kerry Gammill‘s cover for the new edition of Bill’s KEEP WATCHING THE SKIES! Sven mentioned Bill’s work with Forry Ackerman and his insanely voluminous knowledge about the films we all love. He even mentioned Beverly Warren! It made me very proud to see such a wonderful acknowlegement of the sweet, funny guy we all miss.

I wasn’t aware that Sven’s tribute to Bill was gonna be tonight, but surely some of you out there recorded tonight’s episode of SVENGOOLIE

Undoubtedly the woman who had come to epitomize what we recognize today as “celebrity”, Zsa Zsa Gabor, is better known for her many marriages, personal appearances, her “dahlink” catchphrase, her actions, life gossip, and quotations on men, rather than her film career.

Her biggest genre credit was the movie Queen of Outer Space. She also appeared in Nightmare on Elm Street 3, and episodes of Night Gallery (segment “The Painted Mirror”), Batman, and Supertrain. 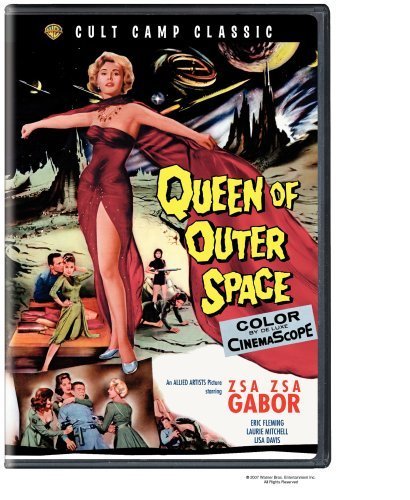 (9) OUR REPLACEMENTS. Kate Macdonald looks back at early cyborgs in her “Review of ‘No Woman Born’ (1944) by C.L. Moore and ‘Lady in the Tower’ (1959) by Anne McCaffrey” at Science Fiction and Other Suspect Ruminations

I teach sf to university students, and knew from the critical literature about gender in sf that sometime in the 1940s a writer called C. L. Moore published a landmark story about the first female cyborg. I tracked down a copy of ‘No Woman Born’ this year, and was deeply impressed. This story is a glowing beacon of fine writing and an impressive acceleration of how the cyborg operates in fiction. No longer a destructive masculine, war-making automaton from the post-WW1 years, this cyborg is a dancer and singer whose new flexibility and vocal range enhance her art, and successfully disguise her strength of purpose by using her femininity to cloak her developing ambitions. Deirdre is a person who is now a cyborg, and her humanity is totally present throughout this novella, despite her gleaming gold body, and her inhuman speed and agility.

The story could just as well be a three-act play. It’s set in Deirdre’s apartment where Harris, her former manager, comes to visit her for the first time after her rehabilitation following a disastrous fire, then when he and her besotted surgeon Maltzer watch her first public performance on TV in her new body, and finally when Harris witnesses Maltzer’s threat to prevent any more cyborgs being made, and Deirdre’s command. ‘No Woman Born’ is not just a story of one person, it’s an opening up of possibilities: cyborgs are stronger and faster, so what will that mean for women, as well as for men? What will that mean for the humans left behind? Can relations between a man and a woman be the same now that the woman is made of metal? How will a woman feel about her body, when no-one is there to admire it? And does this matter? By creating a female cyborg whose primary attributes, in the eyes of the men who managed and created her, are her grace and beauty, Moore shows us that when a cyborg claims autonomy, she becomes nobody’s creature, and can decide how she will live her extended, augmented life. It is a tremendous, game-changing story for feminism in sf, and for how we need to learn to think about being post-human. It’s also beautifully written, with unforgettable images of Deirdre learning to see, to stand, move and dance humanly again, in her glittering robe of metal mesh, and her golden, visored face.

(10) LOVECRAFT COUNTRY MUSIC. If you are looking for a Christmas present for your favorite dark ambient fan, the Cryo Chamber label has been releasing massive collaborations named after Lovecraftian gods. The latest one is named Nyarllathotep. The albums are available in CD and digital formats.

A 190 minute dark soundscape album recorded by 25 ambient artists to pay tribute to H.P. Lovecraft. Field recordings from the deepest dark corners of 4 continents. Dusty tapes out of forgotten archives. Strings through crackling amplifiers and distorted drone combine into a sea of pitch black. Nyarlathotep is a manipulative being in the Lovecraftian Mythos. Unlike Cthulhu, or Azathoth, he delights in cruelty and deception. Causing madness is more important than destruction to him.

Smell the burning embers as you kneel outside the sunken temple before Nyarlathotep. Feel the raspy touch of the faceless pharaoh as he leads you to the ancient Pyramid. Hear his inhuman summoning call to gods beyond reality.

(11) AFROFUTURISM. The New York Times highlighted Afrofuturism in their Year in Style 2016 section. In the article, Ytasha L. Womack, author of the 2013 Afrofuturism: The World of Black Sci-Fi and Fantasy Culture, speaks almost in counterpoint to the Puppies:

“When…in the imaginary future… people can’t fathom a person of non-Euro descent a hundred years into the future, a cosmic foot has to be put down.”

…Afrofuturism’s resurgence could not be more timely, arriving as it does in a climate perceived as indifferent, if not downright inimical, to racial and ethnic minorities. In her book, Ms. Womack recalls a time when black or brown sci-fi characters were all but invisible in the culture at large. As a girl, she would fantasize that she was Princess Leia of “Star Wars.”

“While it was fun to be the chick from outer space in my imagination,” Ms. Womack writes, “the quest to see myself or browner people in this space age, galactic epic was important to me.” It was in the absence of minorities from pop lore, she goes on, “that seeds were planted in the imaginations of countless black kids who yearned to see themselves in warp-speed spaceship too.”

Count among them Tim Fielder, a New York graphic artist and animator whose sci-fi illustrations, produced over a 30-year span, drew visitors last spring to “Black Metropolis,” at the Gallatin Galleries at New York University. Mr. Fielder’s pioneering cartoon narratives — notably those of “Matty’s Rocket,” his spirited black female cosmonaut, who will lift off next year in graphic novel form — are particularly relevant now, he maintained: “They let young artists know that they’re not on dangerous turf, that someone has gone there before them.”

(12) BEFORE YOUR EYES. NPR combines story and video in its report “Google assembles decades of satellite photos to show changes on Earth”.

“I thought about one of the quotes attributed to Yogi Berra,” says Marc Levy, a political scientist at Columbia University’s Earth Institute who specializes in issues of global health and development. “He said, ‘You can observe a lot just by watching.'”

To show just how much the Earth’s landscape has changed over the past three decades, Google sifted through 5 million satellite images containing three quadrillion pixels. The result is a series of high-resolution, zoomable time-lapse videos that capture, in unprecedented detail, the human impact on this planet.

But history tends to get simplified; a map becomes a single road leading from point to point. It’s not surprising that some scientists who contributed invaluably to the field have been kept out of the dominant narrative because they were women, and they were considered anomalies of their time. (That those times practically overlap — meaning a steady line of crucial work being done by women — is one of those scientific patterns that tend to get forgotten.)

But in the last days of the 19th century and the early days of the 20th, Henrietta Swan Leavitt — one of the many woman “computers” at the Harvard Observatory — used the measurements of variable stars to determine fixed distances across space. And fifty years later, Katherine Johnson — a black woman working at NASA’s Langley Research Center in Virginia when the state was still deeply segregated — would map John Glenn’s space flight, and America’s trip to the moon.

(14) RADIO ART. A few months ago we reported the drawing competition BBC Radio 4 was having  to draw episode art for their re-broadcast of Neil Gaiman’s Stardust radio adaptation. The program is airing this month – there will be a repeat Christmas weekend. Schedule here: Stardust – Next on – BBC Radio 4.)

55 thoughts on “Pixel Scroll 12/18/16 Scroll Measured By Weight. Pixels May Settle In Packing”