(1) TAILOR-MADE AWARDS. Who can resist a title like that? From The Book Smugglers — “The 2016 Unconventional, Not At All Traditional, And Completely Unscientific Book Awards by Sarah Kuhn”.

Choosing a “best of” list is one of those tasks that always seems to send me down a rabbit hole of over-analysis, self-doubt, and internal hand-wringing, somehow ending in watching the same “pug confused by butterfly” video over and over again until I can’t remember what I was doing in the first place.

So! Instead of doing a “best of” list, I’m handing out very specific awards to the books that delighted me in very specific ways in 2016. All of these books brought me so much joy and will surely have a spot on my re-read shelf for years to come.

Best Use of Emoji Flirting Hold Me by Courtney Milan

Courtney Milan is one of my favorite authors, a virtuoso at combining endearing characters, ingenious plots, and scorching hot chemistry on every single page. In Hold Me, the much-anticipated sequel to the brilliant Trade Me, Maria Lopez and Jay na Thalang hate each other at first sight—but don’t realize they’re falling in love via the internet magic of online chat. It’s a tricky feat to give characters palpable, believable chemistry when they’re not even in the same room, but Milan’s depiction of Maria and Jay’s whipsmart, banter-y texts and emails made me die a kazillion swoony deaths. And of course their special use of emojis is [emoji of cat with heart-eyes].

(2) EATING THE FANTASTIC. Nalo Hopkinson is Scott Edelman’s guest on the milestone 25th episode of his Eating the Fantastic podcast. 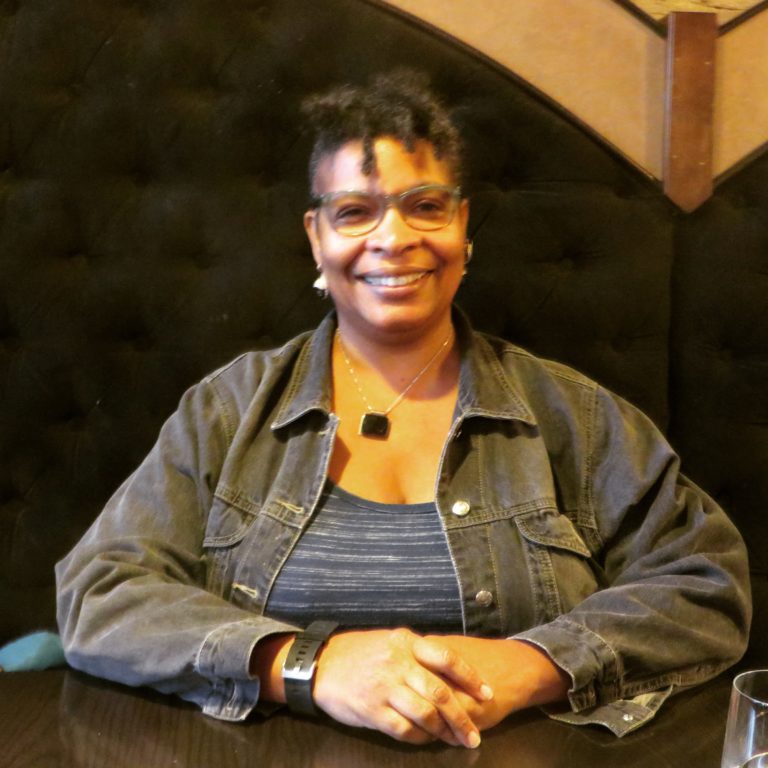 For the 25th episode of Eating the Fantastic—which is also the final episode of 2016—my guest and I brunched at Aggio during a break from the Baltimore Book Festival. Aggio is a restaurant from Chef Bryan Voltaggio which the Baltimore City Paper recently dubbed as offering the Best Modern Italian in town.

I’d eaten at Aggio before, but that was when it was still a pop-up within a different Voltaggio restaurant, Range, in Friendship Heights—where, by the way, I recorded an earlier episode of Eating the Fantastic with Carolyn Ives Gilman, which I hope you’ll be moved to download for dessert once you’re done with the entree of this episode.

My guest for this meal was the always entertaining Nalo Hopkinson, winner of the 1999 John W. Campbell Award for Best New Writer. And she’s more than lived up to the promise of that award, winning the World Fantasy Award for her short story collection Skin Folk, as well as winning the Sunburst Award, the Prix Aurora Award, and many others. Plus her novel, Sister Mine, won my own personal award for being one of my favorite novels of 2013.

(3) CHARTING SF. Mark-kitteh sent a link with an introduction, “A long and interesting survey of the field by the VanderMeers (also the introduction to their recent Big Book of Science Fiction). I liked their determination to look more internationally.”

Since the days of Mary Shelley, Jules Verne, and H. G. Wells, science fiction has not just helped define and shape the course of literature but reached well beyond fictional realms to influence our perspectives on culture, science, and technology. Ideas like electric cars, space travel, and forms of advanced communication comparable to today’s cell phone all first found their way into the public’s awareness through science fiction. In stories like Alicia Yáñez Cossío’s “The IWM 100” from the 1970s you can even find a clear prediction of Information Age giants like Google?—?and when Neil Armstrong set foot on the moon, the event was a very real culmination of a yearning already expressed through science fiction for many decades.

Science fiction has allowed us to dream of a better world by creating visions of future societies without prejudice or war. Dystopias, too, like Ray Bradbury’s Fahrenheit 451, have had their place in science fiction, allowing writers to comment on injustice and dangers to democracy. Where would Eastern Bloc writers have been without the creative outlet of science fiction, which by seeming not to speak about the present day often made it past the censors? For many under Soviet domination during those decades, science fiction was a form of subversion and a symbol of freedom. Today, science fiction continues to ask “What if?” about such important topics as global warming, energy dependence, the toxic effects of capitalism, and the uses of our modern technology, while also bringing back to readers strange and wonderful visions.

In 24 hours, I’ll be drawing the rest of the winners for the DAW Books raffle, which will officially wrap up the fundraiser.

To enter, just  donate $5 to Transgender Michigan and email me a copy of the receipt at jchines -at- gmail.com, with the subject line “DAW Raffle Entry.”

Winners will receive one of the following:

Tad Williams Bundle: each bundle includes one copy of Otherland: City of Golden Shadow (hardcover first edition, first printing)  plus 1 Advance Review Copy of The Heart of What Was Lost.

You can donate more than $5. For example, donating $20 would get you four entries. However, you can only win a maximum of one of each bundle.

Looking at the number of bundles remaining, and the number of entries, every $5 you donate will get you an approximately 1 in 6 chance to win. (And hey, even if you don’t win, you’ve gotten yourself a tax deduction and supported a good cause! Not a bad way to wrap up the year, eh?)

I’ll do one more post in a few days to announce the final results. My thanks to everyone who donated, signal-boosted, bid, and otherwise supported the fundraiser. It makes a difference.

I saw Peter yesterday and he was able to stand and take a few steps. This is monumental to getting him home. He is still in pain but nothing compared to that he was even the day before. We know this because he hasn’t taken any painkillers since Wednesday so again a good sign.

So the nebulous might be date is rapidly turning into Saturday, which will mean that he will be home for Chrismas/Hanukkah.

(7) COUNTING ON WOMEN. Aziz Poonawalla writes about “Rogue One, the Force, and gender”.

A (female) friend of mine loved Rogue One, but noted an imbalance in the Force:

Wept tears of joy. And not to nitpick the film’s clear feminist intentions, but couldn’t at least a handful of the nameless cannon-fodder strike force be women?

The ramblings that follow began as a long-winded reply, but grew so unwieldy and disorganized that I decided it fit better here. Spoilers may follow.

I thought the gender distributions were significant and consistent with the themes of Balance in the Force, and the tension between Dar and Light, in the movie canon to date. The Empire was entirely male – scientists, warriors, leaders. The Rebellion has women in elite warrior roles (pilots) alongside men, but political leadership is always female, and heroes are equally female (Leia, Rey, and Jyn vs Luke, Finn, and Solo, though the latter was usually just plot catalyst). The Rebellion’s leadership from Mon Mothma to Leia has been female, but the Republic during the Clone Wars was male-led, even before Palpatine (though the Senate had prominent female members). The villains have always been male, with the exception of the Seventh Sister from Rebels (but Rebels is a true ensemble cast and will skew the analysis).

There’s water, water everywhere on the dwarf planet Ceres, according to new research. New observations have provided direct evidence that water ice is ubiquitous on the surface and shallow subsurface of this massive asteroid.

Ceres is the largest object in the asteroid belt that lies between Mars and Jupiter, and has long been suspected of containing significant amounts of water — estimates projected up to 30 percent of its total mass. Evidence has pointed to water ice being mixed with the rock on Ceres’ surface, and in a few rare cases, more concentrated patches of exposed ice have been found. Ceres has even belched up plumes of water vapor.

(9) A HOMER RUN. There are many strange stories in Odysseus’s long journey home after the sack of Troy, but where do they come from? The BBC speculates about “The strange inspirations behind Greek myths”.

One of the early wrong turns comes when strong northerly winds carry Odysseus off course to the land of the lotus-eaters. The sailors enjoy the local delicacy so much that they forget about returning home and Odysseus has to drag them back to the ships. There are multiple theories for what the lotus could be, such as strong wine or opium.

Another contender is a plant called Diospyros lotus – the scientific name means “fruit of the gods”. The fruits in question are round and yellow with succulent flesh that is said to taste like a cross between a date and a plum. That explains its common name: “date plum”. But could tasty fruit be enough to convince Odysseus’s men to stay put forever?

‘On the second day of Hogswatch I . . . sent my true love back, A nasty little letter, hah, yes indeed, and a partridge in a pear tree—’

Of the quarter or so of the Discworld I’ve explored, Hogfather is my favourite. Vadim Jean’s TV adaptation is superb: I watch it religiously every Christmas, struck each time by just how much of it – dialogue, stage directions, settings, narration, everything – is lifted directly from the source material. This should tell you much about the quality of the book itself, for rare indeed is an original story ‘adapted’ for the screen with so few alterations.

For me, reading Terry Pratchett’s work is not only a joy but an indulgence, too. Sir Terry is one of my major influences. Those books of his I’ve read, I’ve re-read again and again, taking the time to savour the deliciousness of the prose, the wryness of tone, the trademark humour that is at once delightful and poignant.

Ralph McQuarrie illustrates Yoda as a #scifi Santa Claus in the 1982 #Christmas card sent out by Lucasfilm. pic.twitter.com/0fVkg2Amiy

(12) CHEWBACCA SINGS SILENT NIGHT. After listening to this, you will know why a silent night is treasured by so many…

Merry Wookie Christmas from HISHE and James Covenant! The brilliant idea for “Chewbacca Sings Silent Night” was actually created in 1999 by Scott Andersen (story here: http://room34.com/chewbacca/) and since then his audio has been shared many times, often without crediting him.

[Thanks to Chip Hitchcock, JJ, Mark-kitteh, Scott Edelman, and John King Tarpinian for some of these stories. Title credit belongs to File 770 contributing editor of the day Redheadedfemme.]