Michael D. C. Drout, an English professor at Wheaton College who edits an annual review of Tolkien’s works, is observing the situation from America. He said that those experts will be assessing the most complicated character in the English writer’s already complex world.

“I don’t think there’s any consensus that Gollum is evil,” Mr. Drout said in an interview. “He is the most tragic character in ‘The Lord of the Rings.’ ”

Middle Earth, the place where Gollum began his life as a creature named Sméagol, is full of complex characters and allegiances. But a single gold ring, forged with a dark lord’s evil powers, has the power to rule them all. Sméagol catches a glimpse of the ring, murders for it, and possesses it for centuries until it is mislaid and found by another hobbit. Sméagol struggles to redeem himself, but his obsessive bloodthirst for the ring wins out. He accidentally destroys himself and the ring, but also saves Middle Earth in the process. (It is the hobbit hero Frodo who gets most of the credit.)

“The context is this: Gollum accidentally, not intentionally, saves the entire world,” Mr. Drout said.

Mr. Drout said that no one would’ve appreciated the existential debate over Gollum more than the author who created him. Painfully and pitifully, Sméagol almost succeeds in overcoming his evil side, but fails. It is a scene that is said to have upset Mr. Tolkien to the point of tears as he wrote it, Mr. Drout said.

“He didn’t see him as irredeemably evil,” he said of Mr. Tolkien. “He saw him as someone who had been destroyed by this evil ring.”

The fifth Delhi Comic Con had something for everyone who attended on this mild, wintry day. Die-hard fans came dressed as their favorite comic characters. Others crowded the more than 200 stalls selling comic books, graphic novels and merchandise on cartoon characters.

There was real live entertainment, as well.

Crowds of college students and young people cheered and roared as Kristian Nairn, best known for his role as Hodor in “Game of Thrones,” ascended a stage and addressed them. Nairn was mobbed as eager fans pushed to get themselves clicked with the star of the popular television series….

Indian mythological heroes, dressed in gaudy costumes with bejeweled crowns and sparkly clothes, added to the carnival atmosphere, ready to oblige fans with an autograph, a selfie or a photograph.

Indian comics have seen a revival in the last decade thanks to new funding and technologies for printing, animation, digitizing and distribution.

I know this movie by heart. In fact, while in my 20s and firmly in my barfly life-stage, several friends and I recreated the entire movie over pints at the pub. We didn’t miss a line. There are few cultural touchstones so firmly rooted in our global community as this one.

But I’m now looking at it with fresh eyes, and asking myself…is it really any good? Does it stand up to the test of time and the grey clouds of cynicism accumulated with age?

Largely, yes. Enthusiastically, yes. Are there things that I’ve noticed now, years later, both good and bad? Absolutely. Is it dated? Sure, but not as bad as you think. But ultimately, I think it works. The resonance it has in our culture is well deserved.

(4) STANDLEE ON SMOFCON. Kevin Standlee is running short notes on his LiveJournal about this year’s SMOFcon.

At 4 PM, I went to the panel about administering the Hugo Awards. A year ago, a panel on this subject would have been lucky to draw more audience than panelists. This year, it was standing-room-only. Had we two hours rather than one to discuss how the Hugo Awards are administered, we could have filled it.

After breakfast with Linda Deneroff, Mo Starkey, and John Sapienza, I went to the first panel of the morning, presented by Andrew Adams based on work that René Walling has done to accumulate available demographic information about Worldcon members. The slide above shows the memberships over time, attending and supporting, both in absolute numbers (line) and percentage (colored bars) for the 2015 Worldcon, showing how the numbers changed over time. (The upper line and the upper colored section are supporting members; the lower are attending.) Sasquan really was different. There were many more very interesting charts in this presentation, and you can see some of them if you click through the photo above, but Andrew said he’d publish the entire slide deck later and asked us not to keep taking photos.

How to Call Out Other Conventions. This was a discussion about how and whether you should point out other groups’ mistakes, particularly the most egregious ones that could poison your convention’s relationship with hotel facilities. I found it very interesting listening to the stories behind the panel title, but I was so sleepy that I couldn’t concentrate that well.

(5) ASTRONAUTS SEND MESSAGE ON CLIMATE CHANGE. Sasquan GoH Kjell Lindgren is one of the astronauts in the video “Call to Earth: Astronauts Send a Message from Space to Global Leaders at #COP21 Urging Action on Climate Change”.

In less than three days, an outpouring of messages streamed in from astronauts around the world – eyewitnesses to profound changes to our planet they’ve seen first hand while in orbit. The messages were produced by members of the Association of Space Explorers (ASE), the professional association of flown astronauts, cosmonauts and taikonauts. ASE assists members to communicate their unique perspective of Earth to help stimulate humanity’s sense of responsibility for our home planet.

Also in the video was Wubbo Ockels, Ph.D. Space Shuttle, the first Dutch citizen in space, who said “Our Earth has Cancer and I have cancer too.” He was filmed the day before he died.

There are two places to lose focus. One: yourself sitting down to do the work. Two: inside the work as the work itself loses focus. I’ll tackle number one, as I think that was what was being asked.

Caveat: I believe most writing advice is only as valuable to someone as it works. In other words, I believe all writing advice is a hack to get you to a finished draft and help you find tricks to get there. You try something. If it works, it goes in your toolbox. If it doesn’t, you mark it as not currently effective and move on….

I really like this pair. Obviously the answer is to use the alternative that helps you. Larry Niven always perfected his story ideas by explaining them to select people before putting them on paper. In contrast, if I tell somebody an idea, then I never feel the need to actually do the writing…

Within the same fortnight that David Hartwell announced that the World Fantasy Award trophy would no longer be a bust of Lovecraft, but instead be the head of someone whose sole qualification to represent all of fantasy literature is her skin color, Liu Cixin, the first chinaman ever to win a Hugo Award has publicly spit in the face of those of us who voted for him….

That means that this man is gullible enough to believe either what his translator, or Tor Books, or the mainstream news told him, namely, that we who voted for him were motivated by race-hatred against non-Whites. So we voted for a non-White because his book was good, not because his skin color was correct. Because we treated the award as if it were for the merit of science fiction story telling, not as if it were a political award granted to whatever most helped the far Left. We ignored race. By Morlock logic, that makes us racist.

I realize, my dear readers, that if you read THREE BODY PROBLEM, and weighed its merits, and in your honest judgment you thought it was the best SF novel of the year, and your judgment does not matter because you are not the correct sort of people to have opinions.

Even though your opinion in this one case agreed with our Leftist insect Overlords, the mere fact that the opinion was your taints it.

Whatever your opinion on their relative merits, it’s hard to argue against the fact that Heinlein has endured longer than Asimov and Clarke… and virtually any other Twentieth Century genre writer except H.P. Lovecraft, J.R.R. Tolkien, and Philip K. Dick. Much of his work is still in print in mass market paperback today.

Even more impressively, Heinlein has stayed popular and in print with virtually no help from the film industry. With the notable exception of 1997’s Starship Troopers (and the much lesser-known films The Puppet Masters, from 1994, and Predestination, 2014), Heinlein has endured chiefly on his own steam.

(9) MORLEY REMEMBERED. Available online now and for the next few weeks is the BBC 4 radio production 1977, about the creation of the soundtrack for Watership Down.

In 1977 the bestselling children’s novel Watership Down was made into an animated film. Malcolm Williamson, Master of the Queens music, had been hired as the film’s composer. But all was not well. Williamson, a notoriously difficult and complicated man, was under extreme pressure; it was the Queens jubilee year and he was over commissioned. When the film’s conductor, Marcus Dods, arrived looking for the film’s score he found to his horror that all that existed were two small sketches of music which amounted to no more than seven minutes of screen time. With an expensive orchestra and recording studio booked for the following week, the film’s future looked to be in jeopardy. In desperation he turned to the one person he knew could help; composer and arranger Angela Morley. But she, for her own reasons, was going to need some persuading…

Morley needed persuading because this would be her first high-profile composing job after transitioning to female. Morley later worked on other genre music projects, too, scoring for TV’s Wonder Woman, and assisting John Williams on several films including E.T.

(10) BULK SALES. Hey, John King Tarpinian saw rafts of these at his local CostCo and shot a photo. 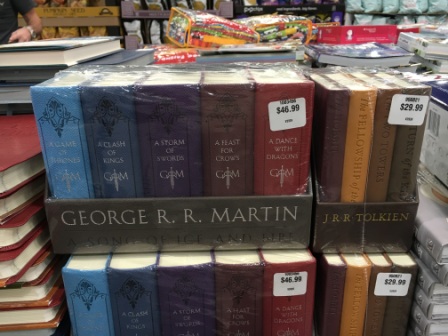 I’m always on the hunt for leather books!

George R. R. Martin’s A Game of Thrones Leather-Cloth Boxed Set fits that bill. It is a gorgeous representation of the bestselling series, perfect for that Game of Thrones fan in your life.

The books are not full-sized but instead of a traveling variety, easy to take with as well as looking beautiful on the shelf.

If you happen to be curious about what it would be like to see a movie on the Death Star, you don’t need to travel to a galaxy far, far away. You can just head to Omaha, Nebraska. The Alamo Drafthouse just opened a Star Wars-themed cineplex that’s absolutely astounding.

There’s a 10-foot replica of the Death Star in the front lobby, and from the looks if it, you can purchase tickets at an Imperial Command center.

(12) SISTERS. The new Tina Fey/Amy Poehler movie Sisters will be released on the same day as The Force Awakens. How will they fight for their audience share? With a Star Wars trailer of their own called “Sisters – The Farce Awakens.”

An establishing shot of the Pentagon took us to a room where National Security Agency dudes Aidy Bryant and Bobby Moynihan are interviewing the three participants in “the first verified alien abduction.” Cecily Strong and Gosling are all lah-dee-dah groovin’ on the cosmic beauty of the mind-expanding, I’ve-seen-God-and-all-the-colors-of-the-rainbow Kenny-G-type experience. Then there’s McKinnon, slumped in her chair in a K-Mart blouse and jeans, her hair a rat’s nest, cigarette in hand, relating a series of experiences that were much more, let’s say tactile, than teleological.

[Thanks to Petrea Mitchell, JJ, Brian Z., Andrew Porter, and John King Tarpinian for some of these stories. Title credit goes to File 770 contributing editor of the day ULTRAGOTHA.]

374 thoughts on “Pixel Scroll 12/6 From the Mixed-Up Pixels of Mrs. Basil E. Frankscroller”