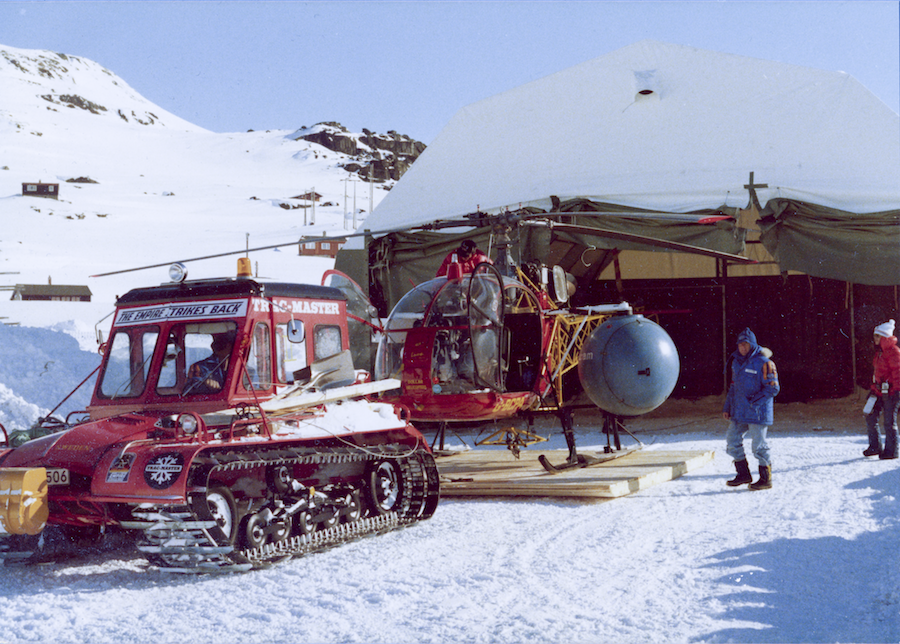 (1) TRACKING DOWN THE GOH. Craig Miller, who was just in Mumbai speaking at an animation event, is now en route to a Star Wars convention in Norway. As he explained to his Facebook readers:

[It’s] actually more of a “The Empire Strikes Back” convention — in Finse, Norway next weekend. Finse is where we shot the exteriors for the Hoth ice planet scenes. And I’ve been asked to be a Guest of Honor. (The other guest is Bjorn Jacobsen, who was head of Fox Norway and was Production Manager for Norway on ESB.)

I’m really looking forward to the trip. (Not the least for the planned “trip to the glacier via dogsled”.) Among the amazing parts of it is that Andreas Frølich, the event organizer, has gotten NSB, the Norwegian railway, involved as a sponsor. We’ll be traveling from Oslo to Finse on Friday via a special train car, fully decorated in “Star Wars” regalia. Bjorn and I will be the ‘guests of honor’ of the train trip as well, answering questions and such. NSB even has a page on their official website about it.

The Norwegian readers among us will get the most benefit from the railroad’s webpage about the event, NSB tar deg til Hoth. (There’s also the con’s own webpage.)

I couldn’t have said it better myself.

(2) PRATCHETT FANS PAY TRIBUTE. The Guardian reviews the Pratchett docudrama Back in Black:

A couple of minutes into Back in Black, there’s a shot of Terry Pratchett’s head, outlined in twinkling lights hovering over his own memorial service at the Barbican Centre in London. It looks like a satellite photograph of some new country. As Auden said of Edward Lear: “He became a land.” And here are its people.

One of the charms of this docudrama is that it largely eschews the usual talking heads in favour of Discworld fans. Even the famous faces that do appear – Neil Gaiman, Pratchett’s consigliere Rob Wilkins, the illustrator Paul Kidby – first entered Pratchett’s orbit as fans. Whether it was the life-changing offer he made to collaborate with the young Gaiman on Good Omens, or the blessing to Stephen Briggs’s attempts to map Ankh-Morpork, or simply Tipp-Exing over an old dedication in a secondhand copy of one of his books so he could “unsign” it for its new owner, Pratchett showered his fans with favours like a Highland clan chief. It’s a clan with its own code of honour: to “be a bit more Terry” is to be kinder, more tolerant.

(3) I’LL DIE WITH THIS HAMMER IN MY HAND. Carl Slaughter spotted another cool video: “So you thought only Thor could lift his hammer.  OK, so only the blonde haired, horn headed Norse god can tote it around on a permanent basis.  But at least 10 other comic book characters have wielded that legendary weapon.  OK, so it was always under special, temporary circumstances, and sometimes through loopholes.  But lift that mighty hammer they did.”

(4) AWESOME TASK. The creators tell NPR about “The Joy (And Fear) Of Making ‘Kindred’ Into A Graphic Novel”.

“It was like, this is awesome, we got this project, it’s, like, our dream project! Yayyy!,” Duffy said. But excitement quickly turned to panic. “I have to do what now?” he also said to himself.

“Octavia Butler is … one of the greatest American writers to live, period,” Jennings said. “She was literally a genius. The way that she would use metaphor and allegory and how she tackled some of the most horrific things about human existence through science fiction and fantasy? She was a master storyteller.” Butler, who died in 2006 at the age of 58, was the first science-fiction writer to receive a MacArthur “Genius” grant and the recipient of several Hugo and Nebula awards.

(5) IMPORTANT STORIES. Tony C. Smith, a Hugo winner for the Starship Sofa podcast, has opened a Kickstarter appeal to fund an anthology, Everyone: Worlds Without Walls. So far, contributors have pledged $2,197 of the $3,746 goal.

If successful, this Kickstarter will fund an e-book anthology of stories that offer a greater representation of ALL the people of this beautiful rich world

The District of Wonders will draw upon its incredible network of authors and actively seek new voices to bring you a scintillating showcase of what it means to value everyone. With talent and tales from diverse nations, cultures, races, and experiences, this anthology will explore and celebrate how we are greater together – and, conversely, the need to tear down walls of ignorance, prejudice, and injustice.

February 11, 2009 – “This was the first time Ray saw the plaster cast of what became the 8-foot-tall bronze Father Electrico,” recalls John King Tarpinian, who was there. “To the right is his caregiver, Santiago.  The guy with the camera is John Sasser, who is still working on the documentary.  You can barely see the artist, Christopher Slatoff.  Chris is best known for his life-size religious statues.” 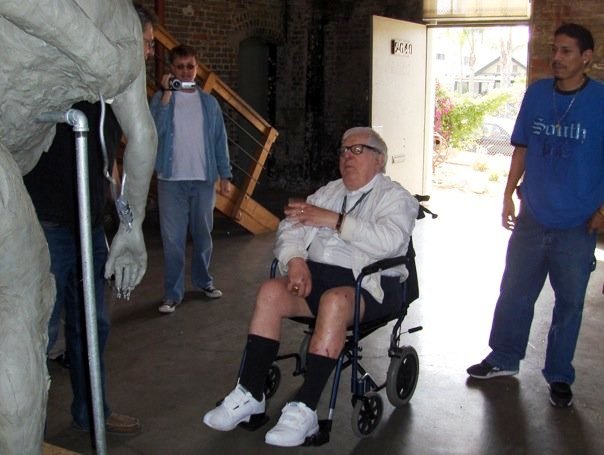 The Beatles didn’t appear live to sing “Hey Jude” and “Revolution.” They’d gotten disinterested in touring by 1968, so they made these new things called videos, and gave them to only one TV program in the United States. Not to The Ed Sullivan Show, which had helped launch Beatlemania and the British invasion four years before — but to the Smothers Brothers.

That same year, George Harrison of the Beatles showed up unannounced — not to sing, but to support Tom and Dick in their fight against the CBS censors. By then, the fights had become almost legendary. Tom confessed to Harrison that on American television, they didn’t always get the chance to say what they wanted to say, and Harrison advised, “Whether you can say it or not, keep trying to say it.”

(8) GOT THAT RIGHT. A picture worth a thousand words, from Goodreads.

(9) ILLINOIS FIGHTS BRAIN DRAIN. Not all legislators share your opinion that they have more pressing issues to work on — “Illinois lawmakers designate October ‘Zombie Preparedness Month’”.

Illinois lawmakers are encouraging the state to be undead-ready by passing a resolution declaring October to be “Zombie Preparedness Month.”

The state House voted Thursday to approve House Resolution 0030, which calls for October to be declared “Zombie Preparedness Month” as a bid to encourage the state’s residents to be prepared for more realistic natural disasters.

(10) OVERWROUGHT. The art is prime, but not nearly as purple as the prose.

holy shit he got so mad I laughed at his article he wrote a follow up article about this tweet https://t.co/HESwj4lruo pic.twitter.com/BaUk7WWkvu

…Typically, some SJWs were not pleased that real gamers would be able to finally bypass the uninformed, fascists gatekeepers known as game journalists, and see and experience the games and technology for themselves. No longer would gamers have to rely on misinformation, sociopolitical commentary and identity politics pervading the coverage of E3….

Other SJWs found it to be a mistake, a blasphemous call for the hydra of consumerism to emerge from the far corners of the interwebs; a stake to the heart of game journalism’s oligarchy; a raping of the gated clique that once controlled the foyer of information that lactated from the bulbous PR udders dangling from the publishers’ visceral bloat that drips begrudgingly through the sphincter of the media and out through the curdled lips of their blogs….

[Thanks to Carl Slaughter, John King Tarpinian, JJ, and Chip Hitchcock for some of these stories. Title credit goes to File 770 contributing editor of the day Ken Richards.]