(1) PLAY INSIDE PKD’S MIND. Chris Priestman of Kill Screen describes Californium, a game based on a famous sf writer in “The videogame tribute to Philip K. Dick is out today”.

In Californium, you essentially play an alternate world version of Dick himself. Cast as one Elvin Green after his wife and daughter leaves him, you start alone but for the pills in your cabinet and the sprawled pages of unfinished novels on the floor. As grim as the circumstances may be, Californium‘s world is brought to life thick with the exaggerated colors of sunny Orange County and a population of 2D cartoon characters drawn with rich expression. Granted, these encounters with fellow residents are mostly miserable—an angry landlady, a disappointed editor, a government agent trying to take you down—but considered strictly visually, the whole thing pops and beams out of the screen at you.

7. To sum up: Diversity means, inviting people who aren't like you. Centering them. Listening to them.

(4) NEXT FANDOM. Squeaker, David Gerrold, and Muffin at Boskone.

Squeaker and Muffin with @David_Gerrold at #Boskone. They know him as the tribble man. pic.twitter.com/1rjLBy2Vao

(5) MERCURY TEST FAILS. At Galactic Journey, The Traveler has the latest space exploration news from 1961.

Unfortunately, MA-1 broke up 58 seconds after lift-off.  It was a cloudy day, so no one saw it occur, but when the telemetry stopped and pieces of the craft fell from the sky, it was pretty clear the mission was over.  The culprit was later identified as the junction between the capsule and booster.

(6) BUD WEBSTER MEDICAL FUND. A repeat signal boost for the Bud Webster Medical Fund drive. Rich Stow says the out-of-pocket medical expenses that Bud and Mary have incurred are staggering. Donations for these medical expenses are being accepted through the MarsCon online store link — https://squareup.com/market/marscon/bud-webster-medical-fund . [Cut and paste URL; I had trouble with the link, but no trouble if I pasted the URL directly into my browser.]

100% of every donation will go to Bud’s out-of-pocket medical and final expenses. The MarsCon Executive Committee has agreed to cover all of the fees that are levied by Square on each transaction. Thank you for any help you can give.

As an added thanks for your donation, you are entitled to receive some ebooks courtesy of ReAnimus Press, publisher of the ebook editions of three of Bud’s books. (Past Masters / The Joy of Booking / Anthopology 101: Reflections, Inspections and Dissections of SF Anthologies)

The perks escalate in proportion to the donations – see details at the site. Also 100% of sales of Bud’s ebooks from ReAnimus Press is going to Mary as well — http://ReAnimus.com/authors/budwebster.

(7) CAMPBELL-ELIGIBLE ANTHOLOGY. SL Huang and Kurt Hunt (campbellreading2016@gmail.com) have put out a call for submissions for Up and Coming: Stories by the 2016 Campbell-Eligible Authors. 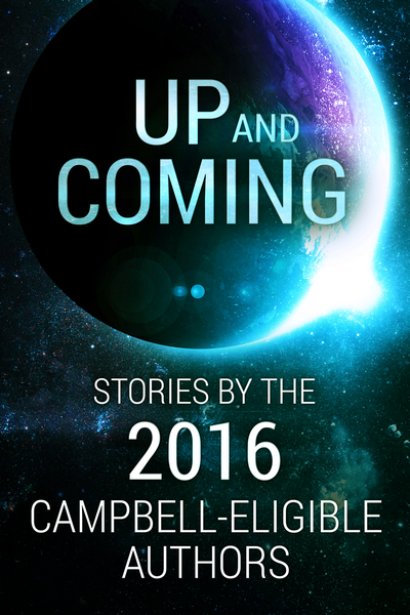 Authors eligible for the 2016 John W. Campbell Award for Best New Writer include writers who published their first qualifying professional science fiction or fantasy fiction in 2014 or 2015. This free e-anthology will collect stories by these award-eligible authors in one place, showcasing the work of exciting new talent for award nominators and for a general audience.

Up and Coming will be available in early March. See the submission link and writers guidelines here. The deadline for submissions is 8:00 a.m. Tokyo time on February 28 (February 27 in Western timezones).

(9) NEXT, PREDICT THE NEBULA WINNER. Brandon Kempner at Chaos Horizons expected the finalists in the Nebula novel category would be the books on top of the Recommendation List, and they were. He says it won’t be as easy to predict the winner.

Winning a Nebula is very different than getting nominated; a small group of passionate fans can drive a nomination, but to win you need to build a broader coalition…

He produces some new tables, and comes up with some fresh analysis:

In some ways, [Fran] Wilde’s nomination is a key one. It’s the first time we’ve seen a novel receive both a Nebula Nomination and an Andre Norton nomination (the SFWA YA category). I don’t know what that means for Wilde’s chances in either, but it may signal a loosening of the SFWAs attitude towards YA fiction in the Best Novel category. That could have major implications moving forward.

(10) SPIDER-MAN AND HIS EXPENSIVE FRIENDS. Comic Book Resources counts down “The 10 Most Expensive Comic Books Ever Sold”.

On Thursday, February 18, Heritage Auctions auctioned off a Certified Guaranty Company (CGC) graded 9.4 copy of “Amazing Fantasy” #15 at their Comics and Comic Art Signature sale in Dallas. As one of the highest-graded copies of Spider-Man’s first appearance ever to be sold at public auction, it was expected to fetch a high price. In fact, it set a record, selling for $454,100. That’s the most ever paid for a Spider-Man comic at public auction.

As I prepped for this blog today, I read article after article, opinion piece after opinion piece, shredding self-publishing. The language in these posts is condescending. The implication is clear: Self-publishing is for losers.

And yet, there’s a tinge of fear in all of these posts. The power brokers understand that things are changing. They can feel the change all around them, but they don’t understand it.

Rather than try to understand it, they’re shaming writers, playing to that writer insecurity. These former power brokers keep trying to convince writers who self-publish that they’re embarrassing themselves, that they’ll never amount to anything. Oh, sure they’re making money, but from whom? Readers who will read anything.

Let me be as blunt as I can here.

People who shame you are trying to control you. They want you to behave in a certain way. Rather than telling you to behave that way, they’re striving to subtly change your behavior by embarrassing you, and making you think less of yourself.

These people are trying to place themselves above you, to make you act the way that they want you to act, even if it is not in your own best interest. Shame is a particularly useful tool, because so many good-hearted people want to behave properly. These good-hearted folk don’t want to offend in any way. Yet shamers try to convince the good-hearted that they are offending or at least, making themselves objects of ridicule.

There’s an entire psychological area of study about this kind of shaming. It’s subtle, it’s nasty, and it often hurts the people it’s aimed at. Usually, shame is used by the powerful to keep the less-powerful under their thumbs.

That’s why shaming has suddenly become a huge part of the public discourse about how writers should publish their works these days. The powerful are losing their hold on the industry. This scares them. The language is getting more and more belligerent (and hard to believe) as the powerful realize they’re going to lose this battle

(12) WHAT RUSCH REALLY MEANT? But at Mad Genius Club, Fynbospress felt this was the takeaway from Rusch’s post:

So the next time someone tells you that you’re “racist sexist homophobic”, without ever trying to get to know you first, makes fun of your religion, expresses disgust at the idea of having children, belittles your choices in what to put in and what to leave out, how you publish, or makes fun of the type of fiction you like to read…

Tell them to take a long walk off a short pier, and keep writing what you makes you happy, and your readers want to read. They’re just trying to control you.

How would you distinguish what you do under the “Dark Knight” title and other Batman comics that you’ve done?

“The Dark Knight” was my ticket to freedom. I was able to do Batman as I’ve seen him. When I do Batman now it’s my version. I’m given a lot of leeway. The character is wonderfully adaptable to the times. There’s the version from the 1940s compared to the ’50s and compared to the ’60s and the Adam West show. They’re altogether different. Mine was just updated for the ’80s and ’90s.

My relationship with DC has always been very, very good. When I first did “Dark Knight” it was turbulent trying some new things out, but that’s the normal tension that happens between your publisher and the writer. There’s bound to be give and take as you hash things out.

There has been about a 15-year gap between each of your “Dark Knight” series.

It takes me a while to get as angry as he is. The character is one I can redo any old time. It’s about finding the right time and everybody’s schedules being open, and having the right people in place who want to get more daring. All these things have to combine at the right time. First of all, the story has to pop into my head.

(14) BOUND TO LIE. “’Blooks: The Art of Books That Aren’t’ Explores the World of Fake Books” at the New York Times.

Mindell Dubansky’s romance with fake books began nearly two decades ago at a Manhattan flea market, where she picked up a small volume carved from a piece of coal and bearing the name of a young man who had died in a mining accident in 1897.

Some 200 items from her collection went on display on Thursday at the Grolier Club in Manhattan, a temple to books, where they will remain through March 12. The exhibition, “Blooks: The Art of Books That Aren’t,” appears to be the first of its kind in the United States.

Most exhibitions at the Grolier, whose grand library holds more than 100,000 volumes with real pages and sometimes spectacular fine bindings, don’t include items like Secret Sam’s Spy Dictionary, a 1960s toy that lets users photograph enemies with a camera hidden inside a fake tome that also shoots plastic bullets out of its spine.

(15) ANOTHER PIECE OF ADVICE. A conversation between two characters in Dorothy Sayers’ Gaudy Night.

Phoebe Tucker. He may be a perverse old idiot, but it’s more dignified not to say so in so many words.  A bland and deadly courtesy is more devastating, don’t you think?

In this video, his face and campaign audio have been cleverly grafted into footage from Game of Thrones.

[Thanks to John King Tarpinian, and John Hertz for some of these stories. Title credit goes to File 770 contributing editor of the day Cubist.]