NASA’s Spitzer Space Telescope has revealed the first known system of seven Earth-size planets around a single star. Three of these planets are firmly located in the habitable zone, the area around the parent star where a rocky planet is most likely to have liquid water.

The discovery sets a new record for greatest number of habitable-zone planets found around a single star outside our solar system. All of these seven planets could have liquid water – key to life as we know it – under the right atmospheric conditions, but the chances are highest with the three in the habitable zone.

“This discovery could be a significant piece in the puzzle of finding habitable environments, places that are conducive to life,” said Thomas Zurbuchen, associate administrator of the agency’s Science Mission Directorate in Washington. “Answering the question ‘are we alone’ is a top science priority and finding so many planets like these for the first time in the habitable zone is a remarkable step forward toward that goal.”

(2) COMMON SENSES. Mary Robinette Kowal did a Reddit “Ask Me Anything” today where someone asked her opinion of this writing advice —

“Include all five senses on every single page of your manuscript. That’s every 250 words.”

This is stupid. Yes, you should include all five senses, but at that pace, it becomes muddy. Plus your main character probably isn’t running around licking the walls.

When you’re there, check the schedule of upcoming AMA’s on the right-hand side of the page. An almost-relentless list of heavy hitters, including Yoon Ha Lee on March 30, Aliette de Bodard on April 25, and Gregory Benford on May 16.

(3) SF HALL OF FAME IS BACK. “Prepare to party like it’s 3001” may not scan very closely with Prince’s lyrics, but that’s how MoPOP is inviting people to attend the new Science Fiction and Fantasy Hall of Fame which opens March 4 in Seattle.

Join MoPOP for the Science Fiction and Fantasy Celebration honoring the Hall of Fame’s 20th anniversary.

(4) TECHNOLOGY SHOULD NOT BE MUSHED UP. The future is not yet: UPS drone has glitches.

The delivery firm UPS has unveiled a drone-launching truck – but the event did not go completely to plan.

One aircraft failed to launch properly and was then nearly destroyed….

The Horsefly octacopter involved was made by Ohio-based Workhorse Group.

The initial test went well, with the aircraft launching from a platform built into the truck’s slide-open roof.

But a second attempt was more problematic.

The drone tipped over when it tried to take off, rocked back and was then nearly crushed when the truck’s roof began to close over the launch pad where the machine was still sitting.

The festival is put on by the university’s entomology department, using cheesy insect sf movies with bad science, to educate the public through reverse example.

This weekend, their guest is University of Illinois alumnus Paul Hertzberg, executive producer of the two movies being shown:  “Caved In” (2006) (with nasty beetles, I think) and 2016’s “2 Lava 2 Lantua” (nasty tarantulas — a sequel to “Lavalantula” which was shown at the festival last year).

The SyFy cable channel and its commissioning of cheap TV movies, often involving bugs, has been a godsend to the Insect Fear Film Festival, giving it a fresh supply of insect sf movies to draw from. 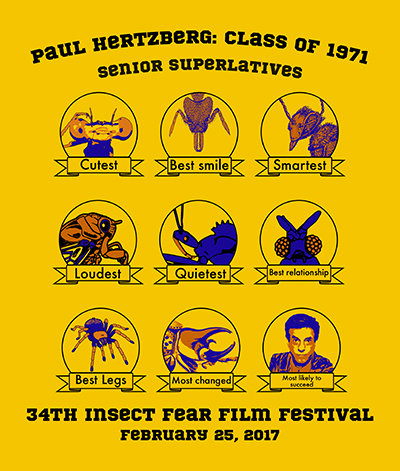 After we heard about Ed’s death, I contacted Tor to ask them if Ed had been one of the writers they had talked with in Kansas City. I am pleased to say he was, and we can now present his interview to you complete and uninterrupted.

All those who knew and loved him will, I hope, appreciate the opportunity to see and hear from Ed one last time… but I should warn you, there is a bittersweet quality to this tape, in light of what was coming. Sad to say, Ed never did finish that last Wild Cards story he was working on, nor any of the other tales that he hoped to write.

Sooner or later, all of us have to see The Jolson Story. Be that as it may, for one last time, I am honored to present my friend Edward Bryant…

(8) SPAM OF THE DAY. Daniel Dern tells the story —

I got this PR email (not unreasonably, since I’m a tech journo):

To which I replied: Why do I feel this is a Peter S Beagle / Cory Doctorow mashup novel?

You see, the eleven fantastic books in this bundle come from authors tied together by, among other accolades, their inclusion in a single volume of Fiction River, in this case a volume called Recycled Pulp. For those of you unfamiliar with Fiction River, it’s an original anthology series that Adventures Fantastic calls “one of the best and most exciting publications in the field today.”

With 22 volumes published so far, Recycled Pulp proves one of the most creative volumes. Inspired by the fantastic, escapist pulp fiction of the last century, the amazing authors in this volume were tasked with creating modern escapist fiction from nothing but a pulp-inspired title. The results were fantastic, indeed.

The initial titles in the Escapist Bundle (minimum $5 to purchase) are:

If you pay more than the bonus price of just $15, you get all five of the regular titles, plus SIX more!

This bundle is available for the next 22 days only.

(10) VIRGIN FIELD EPIDEMIC. Steven Brust thinks con crud has been around for awhile.

I godda code in my doze ad Bozkone. I may die ov zniffles.

Pfft. You think Boston is bad? How many people who attended the 1st Worldcon are still alive? Well? Well? @tnielsenhayden

(11) OH THE HUMANITY. “Two Huge Sci-Fi Novels Were Snubbed by the Nebula Awards” and Inverse contributor Ryan Britt is overwrought:

On Tuesday, the Science Fiction and Fantasy Writers of America released its nominees for the 2016 Nebula Awards and there were two glaring omissions in the category for Best Novel. Cixin Liu’s Death’s End and Babylon’s Ashes by James S.A. Corey. Does the nominating committee of the Nebulas have something against science fiction that everyone loves?

(12) STICK YOUR FINGERS IN YOUR EARS AND GO ‘LA LA LA’. Can Arrival win? Inverse skeptically takes “A Historical Look at Why Science Fiction Always Gets Screwed at the Oscars”.

1969’s 41st Academy Awards is a kind of patient zero for how respectable science fiction movies would be treated at the Oscars for the rest of time. The Academy had to acknowledge some good special effects and makeup, and at least give a shout-out to original writing. Science fiction received a pat on the head in 1969, but 2001: A Space Odyssey — maybe the best sci-fi movie ever made — didn’t even get nominated for Best Picture. And, like 1969, 2017’s intelligent sci-fi movie, Arrival, is pitted against an Oscar-bait favorite: the musical La La Land. In 1969, the musical Oliver! won Best Picture, Best Director, Best Score, Best Sound Mixing, and Best Art Direction. Clearly, the Academy prefers singing and dancing to thoughtful reflection on the meaning of existence.

Although when you put it in those terms, who doesn’t?

(13) NO COUNTRY FOR OLD SPACEMEN. Woody Harrelson has had a pretty good career, and will soon add to his resume an appearance in a spinoff from Star Wars. The first picture of the Han Solo film team was released the other day. (Westworld star Thandie Newton will also have a role in the film, though she is not in the photo.) 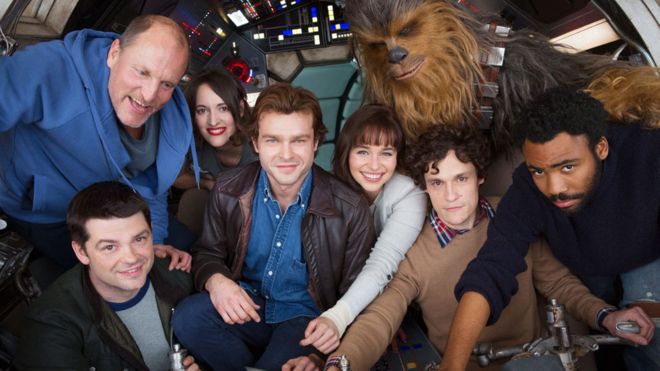 (14) BRUNCH. Not to be outdone, Twentieth Century Fox issued a photo of the Alien: Covenant cast. Unfortunately, they didn’t furnish a handy key telling who’s who. Maybe that’s less important because so many of these characters will probably get killed before the end of the movie? That’s what we expect to happen in an Alien movie, anyway.

(15) STAR CLICKIN’. ScreenRant found it easy to remember “17 WTF Things Captain Kirk Did”. Here are some of the subheads from the middle of the list. How many of them can you associate with the right episode or movie even before you look?

New panel idea: me, @scalzi, and @UrsulaV, with onion dip and an assortment of things to dip, based on audience vote.

I still want a @UrsulaV vs @neilhimself nacho plate rematch.

The tale is stored here for posterity: https://t.co/t2oLIZdOHM

The Rosetta Stone for deciphering this cryptic exchange is Ursula Vernon’s 2012 blog post “In Which I Win A Hugo And Fight Neil Gaiman For Free Nachos”.

…Pretty much the minute I handed the Hugo to Kevin and sat down, the fact that I was running on a mango smoothie and crabcakes hit me, and I wanted a cheeseburger or a steak or something RIGHT NOW. The Loser’s party had a small free nacho bar. It was very tight quarters, and I had to squeeze past a curly-haired man in a dark suit who was….ah.

“I shall dine out for years,” I said, “on the story of how I shoved Neil Gaiman aside to get to the free nachos.”

He grinned. “When you tell the story, in two or three years, as you’ve added to it, please have me on the floor weeping, covered in guacamole.”

“I think I can promise that,” I said.

(17) MEANWHILE, BACK IN 1992. Tom Hanks frames a clip of Ray Harryhausen receiving the Gordon E. Sawyer Award from Ray Bradbury at the Academy’s Scientific & Technical Awards.

[Thanks to Jim Meadows, JJ, Cat Eldridge, Carl Slaughter, John King Tarpinian, and Chip Hitchcock for some of these stories. Title credit goes to File 770 contributing editor of the day Anna Nimmhaus.]