(1) GET IN ON THE ART. Many museums are offering free downloadable coloring books this week, February 6-10, as part of the #Color Our Collections event. There is quite a lot of fantastic imagery of interest to fans — indeed, one item literally is fan art. 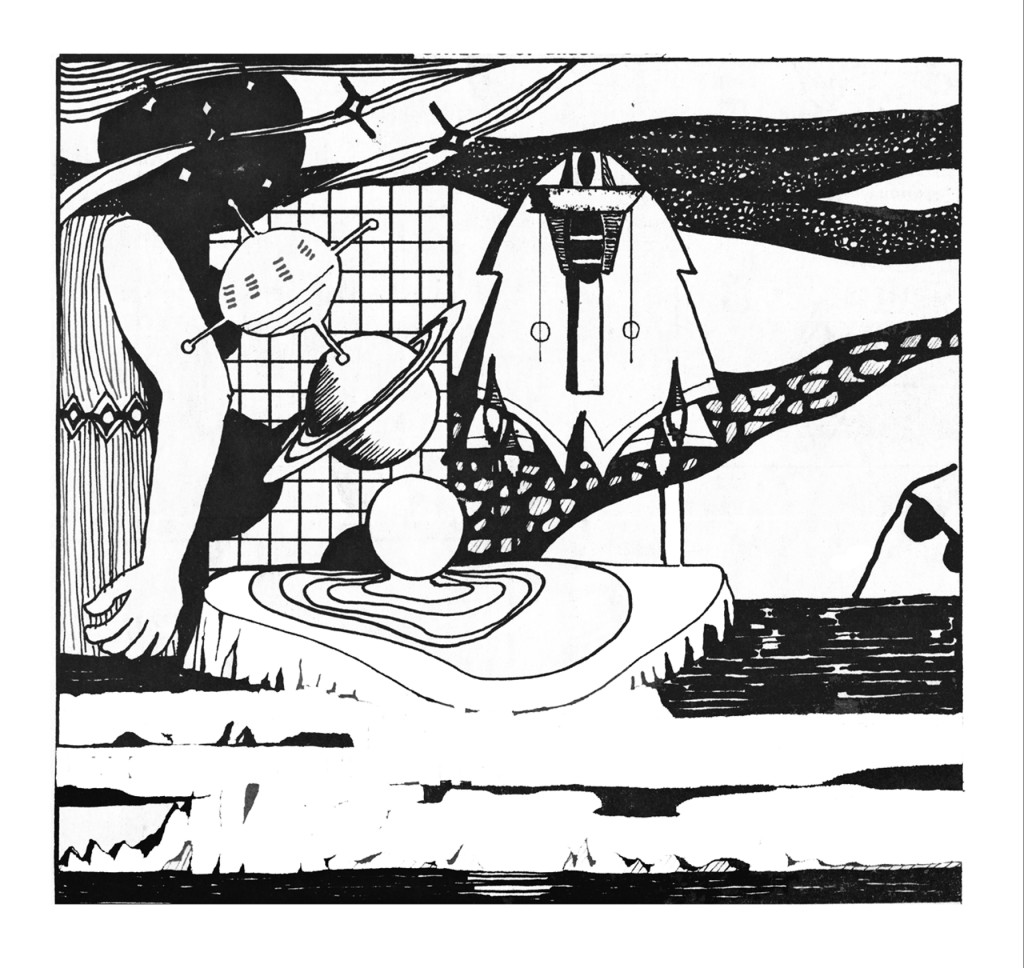 From February 6-10, 2017, libraries, archives, and other cultural institutions around the world are sharing free coloring sheets and books based on materials in their collections. Users are invited to download and print the coloring sheets and share their filled-in images, using the hashtag #ColorOurCollections.

All content is sourced from the collections of participating institutions. With participants from around the globe, this campaign offers an opportunity to explore the vast and varied offerings of the library world, without geographical constraints. Last year’s campaign included over 210 institutions and featured coloring sheets based on children’s classics, natural histories, botanicals, anatomical atlases, university yearbooks, patents, and more.

Glyer’s detective work is not only intriguing; it is also often insightful.  Her readers will gain useful perspectives on two things: many of the Inklings’ works that they already love, and the writing process itself, especially the role of collaboration and encouragement in it.  Judged by their longevity and their output, the Inklings were surely the most successful writers’ group ever assembled.  There are reasons why.  Each chapter of Bandersnatch ends with a sidebar entitled “Doing What They Did.”  People interested in starting their own writers’ groups, or those already involved in one who want to make it work better, will find a gold mine of practical wisdom there.

(4) CLARKE CONVERSATION. The first in a series of interviews exploring themes of science fiction and STEM, sponsored by the Arthur C. Clarke Award, is online at Medium, a conversation between Anne Charnock and Ada Lovelace Day founder Suw Charman-Anderson.

[Charman-Anderson] …The first of my cherished books was Stranded at Staffna by Helen Solomon. Mrs Solomon was my English teacher and when I was nine she gave me a signed copy of her book:

I hope you enjoy reading this story about Morag MacDonald, Susan, and that you agree with me?—?that she was a real heroine. With love, Helen Solomon. December 1980.

Mrs Solomon was right?—?I did enjoy it and I did agree with her that Morag was amazing. It’s the first book I remember crying at the end of, not least because it’s based on the true story of Mary MacNiven, who rescued a horse from a shipwreck in 1940.

I was already an enthusiastic reader, but Mrs Solomon was the person who helped me understand that books didn’t just appear out of nowhere, that someone sat down and wrote them. It was around this time, I think, that I wrote my first complete story, about a girl who lost her sight when she was hit on the head, and who entered into a parallel world when she slept. It was a complete rip-off of Marianne Dreams by Catherine Storr, of course, but I structured it properly and even had character development! It was then that I started to think that I would become a writer when I grew up.

(5) AUTHORITY DIES, Professor Irwin Corey, the comedian, died February 6 at the age of 102.

It’s impossible to provide a short explanation of Corey’s surreal brand of comedy, which was most potent when delivered in his seemingly nonsensical stream of non sequiturs. But the breadth of his career hints at his creative genius: Who else could have appeared in the 1976 film Car Wash, two years after accepting a National Book Award on behalf of the reclusive Thomas Pynchon?

Billed as “the World’s Foremost Authority,” Corey’s guise as an absent-minded professor offered a way to poke fun at multisyllabic jargon and those who use it. When political or scientific authorities seemed to annex a chunk of language, there was Corey to claw it back — a very human antidote to our complicated modern times.

(7) FAN WRITER, FANZINE, EDITOR: Rich Horton posted the final installment of his recommendations, — “Hugo Nomination Thoughts — Other Categories” — which included some very kind comments about Filers, such as the fan writing of Camestros Felapton and Greg Hullender’s Rocket Stack Rank.

But of course there are many wonderful fan writers out there. For years I have been nominating Abigail Nussbaum, especially for her blog Asking the Wrong Questions (http://wrongquestions.blogspot.com/), and I see no reason not to do so again this year. I will note in particular her review of Arrival, which captured beautifully the ways in which the movie falls short of the original story, but still acknowledges the movie’s strengths.

Another fan writer who has attracted my notice with some interesting posts is Camestros Felapton (https://camestrosfelapton.wordpress.com/). Some of the most interesting work there regarded (alas) the Puppy Kerfuffles, and I was quite amused by this Map of the Puppy Kerfuffle: https://camestrosfelapton.wordpress.com/the-puppy-kerfuffle-map/. But the blog is much more than Puppy commentary – indeed, it’s much more than SF commentary. In the more traditional fanwriting area, I can point to the most recent entry (as I write), a well-done review of Greg Egan’s Diaspora.

Another possibility is Greg Hullender at Rocket Stack Rank (http://www.rocketstackrank.com/). The site is run by Greg along with his partner Eric Wong, and both deserve a lot of credit – I mention Greg in particular because of article like his analysis of the effect of slate voting on the 2016 Hugos (http://www.rocketstackrank.com/2016/09/reanalysis-of-slate-voting-in-2016-hugo.html)

(8) THE REAL ESTATE. Curbed reports a bit of literary history is for sale — “A.A. Milne’s Real-Life ‘House at Pooh Corner’ Hits the Market”.

Christopher Robin Milne, the son of Winnie the Pooh creator A.A. Milne, grew up in this quaint brick manse in the English countryside. Christopher Robin inspired the young boy of the same name in Milne’s iconic children’s stories and, so too did the bucolic setting of the family home serve as the backdrop. Known as Cotchford Farm, and on the market for the first time in more than 40 years, the Grade II listed estate spans 9.5 acres of lawns, forest, and streams. The six-bedroom main house, the quintessential English country house if there ever was one, is listed for $3.22M. There’s more to the Milne house than just Pooh, as it was also later owned by Brian Jones of the Rolling Stones, who reportedly died on the property.

The best part of the news item might be that the author’s name is “Rob Bear.”

(8) HEAVENS TO MURGATROYD. Cartoon Brew has the story — “Warner Bros. Reboots Snagglepuss As A Gay Playwright Being Hunted By The U.S. Government”.,

The eight-page story will debut this March in the Suicide Squad/Banana Splits Annual #1, before turning into a regular DC series this fall. “I envision him like a tragic Tennessee Williams figure,” writer Marc Russell told HiLoBrow.com. “Huckleberry Hound is sort of a William Faulkner guy, they’re in New York in the 1950s, Marlon Brando shows up, Dorothy Parker, these socialites of New York from that era come and go.”

The sexual orientation was never affirmed in the Hanna-Barbera cartoons, but Russell, who has also done an updated take on The Flintstones for DC Comics, is making Snagglepuss’ sexuality a key part of the story, in which the pink mountain lion is dragged before the Communist-hunting House Un-American Activities Committee (HUAC). He’s accused of being a pinko, get it?

This is the first I’ve heard that Snagglepuss was pink. I watched those cartoons when I was really young — the station they were on was still broadcasting in black-and-white.

(9) THE CAT’S MEOW. Naomi Kritzer is releasing her collection Cat Pictures Please and Other Stories” in July 2017.

(10) BACK TO WORK. The Hugo Nominees 2018 Wikia site has gone live. Not to early to list the 2017 works you love that might deserve an award next year.

(11) BIG BROTHER WAS WATCHING WHAT YOU WERE WATCHING. The FTC found that Vizio’s TVs were reporting moment-by-moment viewing, plus location info, back to a server.

TV maker Vizio has agreed to pay out $2.2m in order to settle allegations it unlawfully collected viewing data on its customers.

The US Federal Trade Commission said the company’s smart TV technology had captured data on what was being viewed on screen and transmitted it to the firm’s servers.

The data was sold to third parties, the FTC said.

Vizio has said the data sent could not be matched up to individuals.

It wrote: ” [The firm] never paired viewing data with personally identifiable information such as name or contact information, and the Commission did not allege or contend otherwise.

“Instead, as the complaint notes, the practices challenged by the government related only to the use of viewing data in the ‘aggregate’ to create summary reports measuring viewing audiences or behaviours.”