(1) TIE-IN BOOKS. “The Secret Life of Novelizations”, an 11 minute segment on WYNC.

Novelizations of films are regular best-sellers with cult followings — some are even more beloved than the films that spawned them — but respected they are not. Instead, they’re assumed to be the literary equivalent of merchandise: a way for the movie studios to make a few extra bucks, and a job for writers who aren’t good enough to do anything else. But the people who write them beg to differ.

For the Love of Spock is three stories woven together into a solid, emotionally charged strand. There is the story of a gifted actor — a renaissance man, as he is described in the film — and his journey from bit player to fame, fortune and permanent pop-culture icon status.

It’s also the story of a character who sprang from the mind of Star Trek creator Gene Roddenberry, but became flesh and blood — and Vulcan salutes — in the hands of Nimoy. And finally, it’s the story of a father and son and their decades-long journey toward love and mutual acceptance.

There’s no way to fit 83 years into a rather fast-paced 100 minutes. As a consequence, huge swaths of Nimoy’s life and career are mentioned all-too-briefly (his directing career) or not at all (Star Trek V and VI, and much of his latter TV career).

Sean Wallace has announced the the dark fantasy magazine The Dark will shift to a monthly schedule beginning with the May 2016 issue.

(4) ADAMANT. J.C. Carlton says he is really, really right about that book he still hasn’t read – “Why Generation Ships Will NOT ‘Sink’ A Failure To Communicate” at The Arts Mechanical.

As an engineer, I think that Mr. Robinson is clearly wrong.  Or at least, he doesn’t understand the basic rules for setting mission parameters and designing to meet those parameters.  Mr. Robison’s vessel failed because he wanted it to fail.  But to extend that to saying that ALL such proposals would fail is more than a little egotistical. And wrong, really wrong.

Now I haven’t as yet read the book.(Somehow this sticks in the craw of the people over at File 770….

Real pioneers don’t screw up  because failure is not an option and incompetence is something that can’t be tolerated. Yes the environment and the unknowns get the pioneers, think the Donner Party, but the typical pioneers don’t go down without a fight.  They do the work that needs to get done because they are working to make a better place for the next generation, not themselves.  We as a culture have suppressed the pioneer spirit in the last few years and maybe that’s a mistake.  Because pioneers desire and understand liberty and the alternative is tyranny.

Here’s a bunch of links to get the pioneer spirit started.  Sorry, Mr. Robinson, our carracks to the stars will not fail because the pioneer spirits in them, will not let them fail.  Look if my ancestors can cross the North Atlantic in a tiny leaky little boat, can I say anything less?

The galaxy’s empire has a new colony. Astronomers have detected a dwarf galaxy orbiting the Milky Way whose span stretches farther than nearly all other Milky Way satellites. It may belong to a small group of galaxies that is falling into our own.

Giant galaxies like the Milky Way grew large when smaller galaxies merged, according to simulations. The simulations also suggest that whole groups of galaxies can fall into a single giant at the same time. The best examples in our cosmic neighbourhood are the Large and Small Magellanic Clouds, the Milky Way’s two brightest satellites, which probably orbit each other.

About four dozen known galaxies orbit our own. The largest in terms of breadth is the Sagittarius dwarf, discovered in 1994 – but it’s big only because our galaxy’s gravity is ripping it apart. The next two largest are the Magellanic Clouds.

(6) BATMAN V SUPERMAN V ABIGAIL. This is the kind of post that has inspired me to write Abigail Nussbaum’s name on my Hugo ballot from time to time. In the paragraphs following the excerpt, she deconstructs a scene from Batman v Superman: Dawn of Justice and gives us a wonderful premise for understanding what shaped Superman’s psyche in the Snyder and non-Snyder movie versions.

Nor am I here to talk about how Batman v Superman fundamentally betrays its two title characters–and betrays, along the way, the fact that Snyder and writers David S. Goyer and Chris Terrio fundamentally do not understand what either of those characters are about.  Because the truth is, I don’t really care.  I’m not a comic book reader, but I’ve been watching Batman movies for twenty years, and good or bad they all depict the character as, at best, someone who is working out their mommy-and-daddy issues by beating up poor criminals, and at worst, an outright fascist.  I’m perfectly willing to believe that there is more to the character, and that the comics (and the animated series) have captured that, but I think at this stage it’s a mug’s game to go to a Batman movie expecting to find more than what they’ve been known to give us.  As for Superman, if I want stories about a character who is all-powerful yet fundamentally good, and still interesting for all that, I’ve got the MCU’s Captain America, not to mention Supergirl, so that fact that Batman v Superman depicts Superman as someone who seems genuinely to dislike people, and to be carrying out acts of heroism (when he deigns to do so) out of a sense of aggrieved obligation, doesn’t really feel worth getting worked up over.  On the contrary, I was more upset by those scenes in Batman v Superman in which characters insisted–despite all available evidence–that its Superman was a figure of hope and inspiration, because they made it clear just how badly the people making the movie had misjudged its effect.

From the CBS News Almanac: …That day saw the premiere of a Warner Brothers cartoon titled “Porky’s Duck Hunt.”

The cartoon followed Porky Pig as he attempted to bag a most unusual duck … a duck quite unwilling to follow the rules:

Actually, make that DAFFY Duck, in his very first film role — his first, but by no means his last.

(9) ACCOUNTING FOR TASTES. Fynbospress, in “Preorders” at Mad Genius Club, sorts out how that sales tool affects traditional and indie publishers differently.

Several years ago, indie publishers put up quite a hue and cry about not having preorders available to them on Amazon, unlike their trad pub competitors. Amazon listened, and made preorders available, with a few caveats to ensure that indie pub would indeed have the product ready on ship date, and not leave Amazon holding the bag while angry customers yelled at them.

With glee, indie pub rushed out to put things on preorder…. and promptly found it wasn’t all that and a bag of chips. It’s a useful tool, but it isn’t nearly as important to them as it’s made out to be.

This makes logical sense in the non-publishing world, as the “sale” happens the day a contract to sell is agreed upon, not the ship date, not the date money changes hands, nor the date the customer receives the item. This is pretty standard whether ordering a run of shoes manufactured in China, selling wheat futures in Chicago, or a racehorse in Kentucky.

(10) QUIDDITCH ON TV. “Quidditch, the sport of wizards” was a segment on today’s CBS Sunday Morning. There’s a video report and a text article at the link.

Quidditch, anyone? No idle question in Columbia, South Carolina, where a big championship match is underway this weekend. Anna Werner attended last year’s contest, where she saw an author’s imaginary game come to life:

It’s been nearly 20 years since the first Harry Potter book came out and proceeded to cast a spell over fans around the world. J.K. Rowling’s creation became the most popular book series in publishing history, with over 450 million copies sold — and one of the biggest movie franchises in film history, with nearly $8 billion in ticket sales.

And now Potter-mania has spawned another craze, one based on the high-flying fantasy game played by Harry and his friends called Quidditch, which has now jumped from the world of wizards to the playing fields of Rock Hill, South Carolina.

“Quidditch has exploded into the college scene and the high school scene all over the world,” said one girl. “It’s absolutely amazing!”

It’s even been the subject of a documentary called “Mudbloods” (a Harry Potter reference, of course).

“People get passionate about it because they grew up with Harry Potter,” said one fan.

The documentary introduces Alex Benepe, one of the founders of Quidditch. He’s been playing since 2005, when a classmate at Middlebury College turned to him with an idea: “‘This weekend, we’re gonna try and play real-life Quidditch,'” Benepe recalled. “We were freshman. And I just thought to myself, ‘There’s no way this is gonna work. This is gonna be so dumb!'”

A volleyball doubles as a Quaffle, which players use to score points, either by throwing it or kicking it through a hoop.

Bludgers are dodgeball-weapons used against opposing players; hit someone with a bludger, and they are temporarily out. They must drop whatever ball they possess, head to the sidelines, and touch a goalpost before returning back to the field.

In the J.K. Rowling books, a Snitch (or a Golden Snitch) is a winged ball that tried to avoid capture. Since magical equipment is harder to come by in real life, Snitches are instead played by people dressed in yellow, who run onto the field at the 18-minute mark and must evade players who try to steal their “tail.”

If a Snitch loses his tail (actually a tennis ball in a sock), the game is over, but in the event of a tie score, play goes into overtime.

(12) RUNNING LOGAN’S MOVIE. Once upon a time there was a Jeopardy! answer… 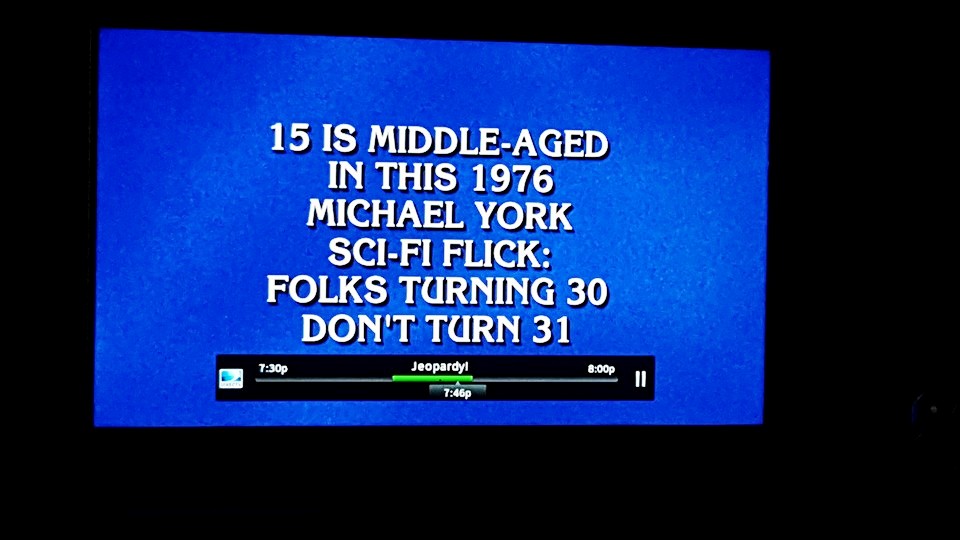 John King Tarpinian says “In the book middle age would be ten.”

And while we’re on the topic, John recommends Reading The Movie Episode 3: Logan’s Run, a 2011 video.

[Thanks to John King Tarpinian, Xtifr, and Andrew Porter for some of these stories. Title credit goes to File 770 contributing editor of the day IanP.]