(1) NOBEL ROLLOVER. The Associated Press reports “No Nobel literature prize this year but 2 prizes in 2019”.

Following weeks of internal bickering, sex-abuse allegations and a financial investigation by police, the body that hands out the prestigious Nobel Prize in Literature announced Friday that no prize will be awarded this year.

Instead, the academy said two Nobel Prizes in Literature will be handed out next year, the 2018 prize and the 2019 prize. The decision was made Thursday at a weekly meeting of the Swedish Academy in Stockholm on the grounds that the group was in too deep a crisis to choose a Nobel winner properly.

“The present crisis of confidence places high demands on a long-term and robust work for change,” said Anders Olsson, the academy’s permanent secretary. “We find it necessary to commit time to recovering public confidence in the Academy before the next laureate can be announced.”

(2) WHEATON’S SPEECH ABOUT DEPRESSION. The actor has posted the text of his speech for NAMI Ohio’s statewide conference, Fulfilling the Promise: “My name is Wil Wheaton. I live with chronic Depression, and I am not ashamed.”

…My life is, by every objective measurement, very very good.

And in spite of all of that, I struggle every day with my self esteem, my self worth, and my value not only as an actor and writer, but as a human being.

That’s because I live with Depression and Anxiety, the tag team champions of the World Wrestling With Mental Illness Federation.

And I’m not ashamed to stand here, in front of six hundred people in this room, and millions more online, and proudly say that I live with mental illness, and that’s okay. I say “with” because even though my mental illness tries its best, it doesn’t control me, it doesn’t define me, and I refuse to be stigmatized by it.

So. My name is Wil Wheaton, and I have Chronic Depression….

(3) MAY THE FOURTH BE WITH YOU.  For the Fourth, iFixit is doing a number of teardowns (inside hardware looks) of Empire/Jedi tech, like this lightsaber: 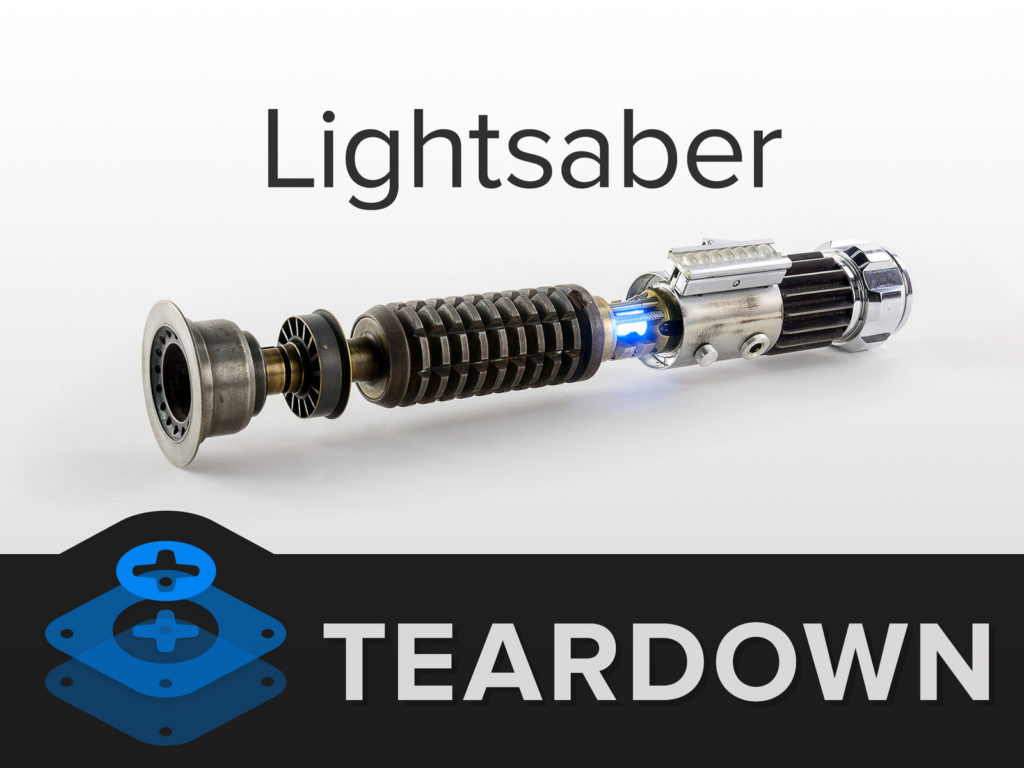 Do you have the death sentence on twelve systems? Do you frequent wretched hives of scum and villainy? Then you probably don’t want to see this saber firing up.

This teardown is not a repair guide. To repair your Lightsaber, use our service manual.

(4) SALLY FOURTH. SW Day Observation: “Heathrow pranks travellers with fake Star Wars departures board for ‘May the 4th Be With You’” – The Sun has the story.

Destinations such as Tatooine, Kamino, Hoth and Jakku were up on the board in a tribute to Star Wars Day.

A note below the 11.40am flight to Jakku announced that it had been “delayed due to sandstorms”. 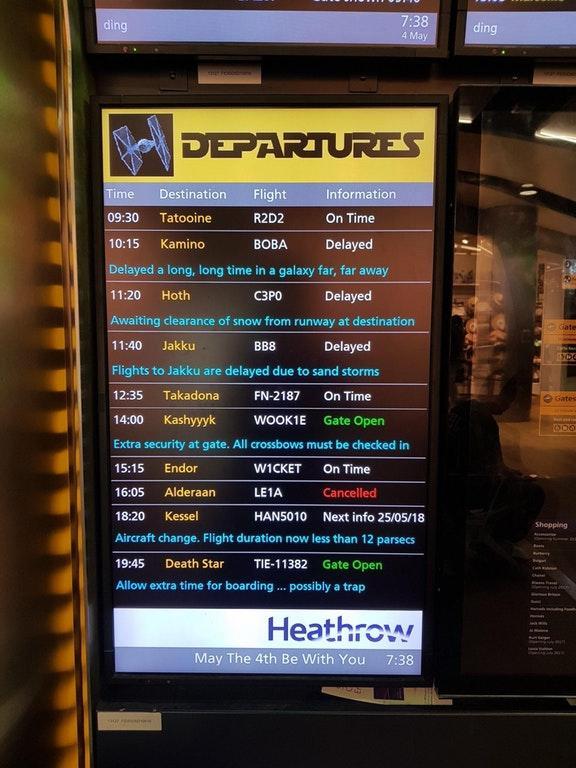 (5) FREE COMIC BOOK DAY. Saturday May 5 is Free Comic Book Day. Click here to find a participating location near you.

(6) PREVIEWING THE FREEBIES. NPR’s Glen Weldon presents “Free Comic Book Day 2018: A Guide To The Best Bets And The Best Avoided”,  a series of mini-reviews about the free comics being handed out on Saturday.

Free Comic Book Day has been an annual event for 17 years now. I’ve been writing up this guide to the FCBD books for the past 10 of those, so believe me when I say:

There are more all-ages books in this year’s mix, more stories starring girls, women and people of color and a healthier, more robust selection of genres to choose from than ever before.

It’s also gratifying to see fewer publishers putting out FCBD offerings that amount to little more than samplers, offering readers only tiny snippets of stories from several different comics they publish. Happily, most of the books you’ll be able to pick on Saturday — even those that are simply excerpts from new or forthcoming graphic novels — make for solid, substantial, satisfying reads. 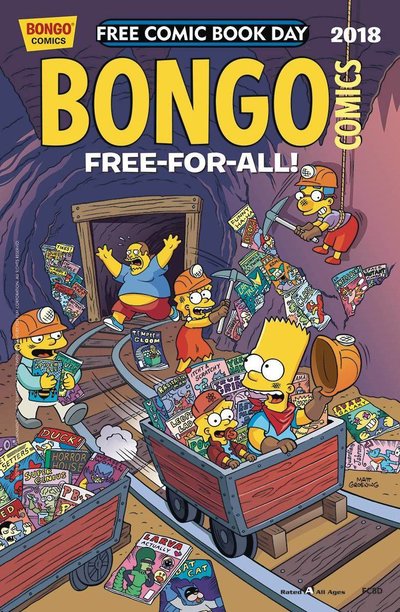 The Gist: A perennially solid FCBD choice: Looks and feels like several episodes of (latter-day, it must be said) Simpsons.

Additional Info: Standout story is the lead one: Lisa takes over Krusty’s show and transforms it into an educational snore. (Yes, it’s just a riff on the season one episode “Krusty Gets Busted,” but it’s got primo Sideshow Mel content — he studied English Lit at Cornell!)

(7) FUNDS ROLL IN FOR BRADBURY STATUE. “Waukegan Ray Bradbury statue fundraising halfway to $125,000 goal” – the Chicago Tribune has the story.

A $ 5,000 donation from the National Gypsum Company has helped the Ray Bradbury Statue Committee reach and surpass its halfway-mark goal to erect a statue commemorating the life and works of world-renowned author and Waukegan native Ray Bradbury.

The proposed 12-foot-tall statue, which will sit on the grounds of the Waukegan Public Library on County Street in downtown Waukegan, was inspired by Bradbury’s poem “If Only We Had Taller Been” and will be created in stainless steel by acclaimed artist Zachary Oxman, depicting Bradbury astride a rocket ship.

(8) ROBOCOP. Another stfnal statue is landing in Detroit: “The Robocop statue finally finds a home”.

Back in 2011, a tweet to then-mayor Dave Bing led to a Kickstarter project that gained worldwide attention.

Project organizers announced yesterday that the Robocop Statue will land at the Michigan Science Center.

It’s been a long, strange trip for the 10-foot-tall bronze statue. From tweet to Facebook group to Kickstarter project to one small plan to one much larger vision. On the project update, organizers say, “From a humble thought of 3D scanning an action figure and blowing it up to 6 feet tall to pour in iron, we somehow found ourselves on a path to create a 10-foot-tall officially MGM-sanctioned bronze statue from a recreation of the original suit Peter Weller wore when he played RoboCop in 1987”.

(10) YA AUTHOR INTERVIEW. At NPR, author Dave Eggers talks about his new YA book Lifters: “In Dave Eggers’ New Book, Heroic Kids Do The Heavy Lifting”.

On having kids read his story

They’re astoundingly good editors. They will tell you exactly what’s working, exactly what’s not working. I took every last edit from every one of these kids. They are the purest readers. They do want to be entertained, and I’ll say that sometimes they are easier to please, for sure, than cynical adult readers, because it’s all new to them — so this might have been, like, the seventh chapter book some of these kids read, or the second or the third. So that’s why I feel honored to be part of their reading experience at such a young age, because I remember every last book I read in that era. I was not, like, a voracious reader, so I remember the one or two books a year that I read when I was ten and 11 and 12, because I had to be dragged kicking and screaming to a chapter book at that age.

The Shadow Clarke jurors have now all produced their reading lists, and the official Arthur C. Clarke Award shortlist has been revealed. It’s time to reflect on everyone’s choices.

At this point, it is worth reminding everyone once again that the Shadow Clarke jurors are not in direct competition with the Arthur C. Clarke Award judges. Our projects are complementary but rather different. The Clarke Award judges have to choose a winner at the end of their judging process, and we, the sf reading public, are not privy to their deliberations, as is right and proper. The Shadow Clarke jurors, on the other hand, don’t have to choose a winner, hence our emphasis on choosing ‘reading lists’: lists of titles that interest us and will, we hope, promote some broader discussion about the state of science fiction in 2018. And we can talk about how we made our choices. As our introductions have shown, we’ve chosen our lists according to a wide range of criteria. And yes, in some instances we are playing against the system, so to speak, but we have a licence to explore the submissions list in a different way.

A teenage boy journeys to find his missing father only to discover that he’s actually Bigfoot.

The English language is forever in flux, as new words are born and old ones die. But where do these terms come from and what determines whether they survive?

Charting linguistic change was once a painstakingly slow task, but a new analysis of nearly one billion Tweets – presented on 17 April at the Evolang International Conference on Language Evolution in Torun, Poland – now offers us an unprecedented glimpse of this process in action….

The researcher behind the study, Jack Grieve at the University of Birmingham, UK, analysed more than 980 million Tweets in total – consisting of 8.9 billion words – posted between October 2013 and November 2014, and spanning 3,075 of the 3,108 US counties.

From this huge dataset, Grieve first identified any terms that were rare at the beginning of the study (occurring less than once per billion words in the last quarter of 2013) but which had then steadily risen in popularity over the course of the following year. He then filtered the subsequent list for proper nouns (such as Timehop) and those appearing in commercial adverts, and he also removed any words that were already in Merriam-Webster Dictionary. Acronyms, however, were included.

Another effect is called “aliasing,” where something is moving in beat with the camera frame rate. The most common of these is when you watch a video of a car moving, and it looks like the wheels are spinning backward. They’re not! It’s just that the wheel spins almost all the way around in the time it takes the camera to take two frames of video, so in the second frame it looks like the wheel has turned backward a little bit. Do this many times in a row and you get that weird effect of the wheels looking like they’re spinning the wrong way. I wrote about this extensively when a video taken by a camera that fell out of a plane went viral. You can also use it to make what looks like a magic spiral of water.

So you can get really weird effects by accident. However, artist John Edmark has used this effect on purpose and to his advantage, creating stunning and mesmerizing videos. He makes sculptures with cyclic patterns in them, then records them spinning (he also uses a strobe light with timed pulses to mimic camera aliasing). What you wind up with is very cool:

40 thoughts on “Pixel Scroll 5/4/18 The Scroll Above The Pixel Was The Color Of An Old File, Tuned To A Dead DNS”